After picking up a fight with the “Mati ke Lal” mentor Ila Arun last week, Anand Raj Anand is now upset as his team, “Bollywood ke Badshah” received the lowest number of votes this week. 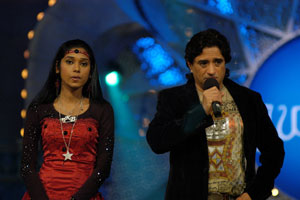 Featured Video
So, what is it that is troubling Mr. Filmy Anand Raj Anand? Last week we saw him comment that it’s Bollywood which makes the career of the singer, and in fact he went on to say that even Ila Arun is known to the world because of the popular songs she sung in Bollywood.

So what does Anand Raj Anand have to say about the low votes that his team has been getting? Well, he goes on record this week to say that because there are so many singers on other reality shows on other channels that the viewers' votes have gotten distributed. He adds on saying, as Folk and Sufi Music is only sung on this channel, these two genres are getting all the votes and hence his team is left behind !!

So what was with the statement made by Anandji, “Bollywood zamaane se baat karta hain”? And above all, why isn’t Anandji’s lucky charm ARA belt working for him??

arindamchsk 14 years ago Was there any elimination? If so who was eliminated? Truely speaking,the Bollywood Badshahs are missing somebody of the callibre of Abhas or Anwesha.

14 years ago this man is such a loser and a wannabe. dont worry Ila ji and Rahat saab.. you'll will rock!!!

It just looks likes that Bollywood is more popular coz Bollywood songs are easily available thru cassettes, CDs or even FM radio etc. too. But ask anyone esp. a middle aged person or may be who has little rustic background.. their feet started thumping at the sound of any folk song or their eyes get closed on their own when they hear any Sufi Song.. whenever they are available to them.