Anamika was giving out best performances week after week and along with accolades from the judges, she was also getting the highest votes from public. But this week during the Friday’s elimination shoot, this girl bogged down with emotions and became immune towards the whole system of SaReGaMaPa L'il Champs. 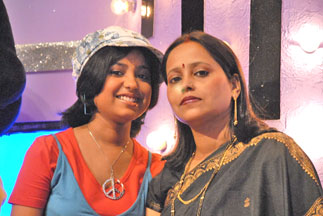 Probably what she saw and heard last week about Smita had hit her heart deeply. Anamika went silent and isolated herself from all after the incident. And when it was time to declare the eliminated contestant for this week, Anamika couldn’t control her emotions. According to her she no longer believed in friends, judges, mentors, and the whole system around her. To her it seemed everything had become fake, unrealistic, and materialistic. It was nothing but a money-making business and they were used as mere tools for churning money. She felt it was just a platform where emotions had no meaning. Everyone on the sets was shocked with her out-burst. On asking her about her behavior Anamika clarified, “Actually last week Smita got eliminated and her father had taken so much tension that he was admitted to the hospital. So I got a fear about my family too if I fall into such a situation. So I thought better to quit now than getting eliminated.”

She was on the verge of leaving the contest as she felt that she can't be part of a system that she doesn't believe in. “I was not ready to perform but later on my mom and dad told me not to worry. After all it’s a competition and only one can be a winner,” Anamika clarified. In every phase of life the competition is getting tougher and looks like even these reality shows are not untouched anymore. “I’m telling this to all parents - Don't keep too much expectation so that later on it hurts you. After all it's a competition and losing and winning is the part of the competition,” was the message little Anamika had to give to all.

So do we now see the same Anamika back on the show? “I am bit relaxed now after assurance from my parents that they are going to take it as a game. I am back in action and you will all see Anamika rocking the floor this Saturday. Now winning and losing is not on my list, I just have to perform best,” was the spirited reply from this small girl whose mother feels her daughter has suddenly become too big.

As Anamika said parents need to understand this and make sure not to put more pressure on their wards or even themselves. To win, you need to have your share of luck too, so it’s always in the best interest not to keep much expectations and take them as mere games.

'Saath Nibhana Saathiya 2' to see the entry of Radhika's parents

Vijayendra Kumeria drives down to Ahmedabad to bring his parents home ...

sweet_angel27 13 years ago Thats really sad about Smita's father and I think Aanamika is right and that was very good what she said to all the parents that it is a game dont take it so seriousally!!!

Agreed! that parents play a vital role in their kids achievements but sometimes they do go far from the reality and expect the unexpected esp. when their kids are talented/gifted.

Showing encouragement and guiding through is one thing and putting immense pressure is another. Parents needs to be cautious about it as it might backfire in a negative way. One can see and learn from this instance.

I am also against the idea of kids being forced to fulfill their parents unfulfilled dreams.

ammmu 13 years ago Oh no, that indeed is very sad news :( Wish her family the best, and praying for her dad's good health...

Hmmmm... thanks for the article!

ptangelmom 13 years ago it makes me angry to hear that evryone including smita's father himself are blaming smita's elimination for his heart attack. heart attacks occur due to blockage of the arteries that supply the heart muscles. her father would have had a heart attack no matter what. i hope smita does not blame herself for the rest of her life for her father's sickness. it is merely a coincidence that the two things happened at the same time. if anything the heart attack should be blamed on his poor diet and excercise habbits. smita keep singing and do not blame yourself.

JattiTude 13 years ago what the hell????? sonu and suresh ji keep saying that this show is without any controversy etc etc..... what do we call this????? what r they trying to do..... getting a sympathy to this girl from all over or putting her in a spot where she is hated by all and not voted much..... what are they trying to do????? honestly i dont like this on personal level now.... i mean, i thought she was good, but a drama is put on by her too..... well i guess then the littl ekids are much better than her.... CHIMNI cam einto eliminations so many times, and she is so strong about it all the time..... vasundhra cries all the time, but i can understand her part..... but anamika... sorry but i didn texpect this of her..... my favorite now is rohanpreet and i pray to god that he wins..... i like amir too.... an untrained good singer....... either rohan or amir!!!!!

samir_soni 13 years ago reminds me of all the other walk outs...please....another drama using a kid!

TiaMaria93 13 years ago awww thats really mature of her. and i get where she's coming from. all the best to her. goodluck anamika!

ani_gr 13 years ago i just love you anamika, you are the best, lot sof good luck to you. best said above. there was a father who said on the stage that he had spent 75,000 rs or so, which did not mean anything but meant business. very rightly said.