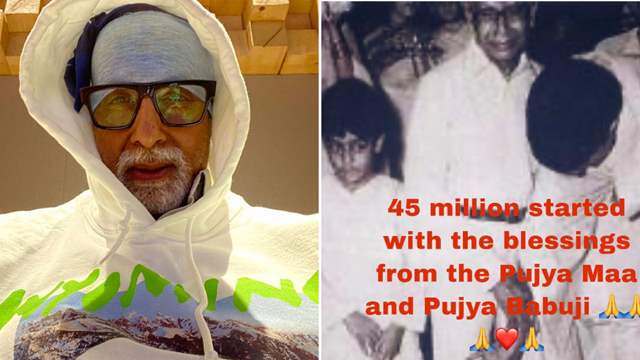 Bollywood superstar Amitabh Bachchan is one of the most avid social media user of the industry and shares his thoughts and musings regularly with his fans.

Big B clocks 45 million followers on Twitter and on this special day, he had a rather special tweet to share. If you already don’t know, the actor has maintained a trend of numbering his tweets and his latest ‘T 3777’ celebrates his milestone on the social media app along with a heartwarming story from the time he suffered an accident on the sets of his film ‘Coolie.’

He shared a throwback picture featuring himself bowing down to his father Harivansh Rai Bachchan and a little Abhishek. The picture had a text written on it which read: ‘45 million started, with the blessings from the Pujya Maa and Pujya Babuji.”

The picture was shared with Big B by a fan but the actor shared the back story of this priceless moment. He shared that the picture was from the time he came back home after the deadly accident on ‘Coolie’ sets and how his father broke down in tears for the first time.

“T 3777 - The caption informs of 45 million on Twitter .. thank you Jasmine, but the picture says a lot more ..Its the moment I came home surviving death after the 'Coolie' accident ..Its the first time ever I saw my Father breaking down ! A concerned little Abhishek looks on !” Amitabh Bachchan tweeted alongside the picture.

Bachchan had suffered internal abdominal injury after his co star Puneet Issar accidentally punched him in the gut while shooting for an action sequence for Coolie. He was immediately rushed to a nearby hospital where he was declared clinically dead a few minutes before being put on a ventilator.

However, after several surgeries and months in the hospital, Big B recovered and August 2, 1982 is still considered as his second birthday.