After the terrorists attacks in America, many people were denied permission to travel to the United States for the last few years as their names came up as common to many names on the terrorist list. 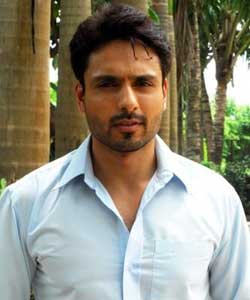 Rudra aka Iqbal Khan of Zee TV's Sanjog Se Bani Sangini was also denied access to America years ago as he shared a common name with those suspected to be prime targets in creating war against the nation. The fact  that he being a well known Indian television actor helped him but still he had given up hope of visiting the country when three years ago, he got a call from the Embassy saying that they would like to grant him a visa.

So, since then, every year the actor packs his bags to Houston on 25th September as he is the Board Member of the 'Indian Film Festival of Houston'.

After having worked with some of the best of production houses right at the start of his career, the lead actor is now all set to join the Film Festival with pride. This association is a non-profit organization devoted to creating a greater appreciation of Indian cinema and culture by showcasing quality films that honor entertainment industry performers and film makers while promoting the diverse perspectives of the Indian Diaspora through an annual event.

Iqbal Khan says, "I have to take leave from Sangini shoot for 6 days and a lot of rescheduling has been lined up to cover up for my absence. Nevertheless, this film festival is close to my heart as this is for a cause. If everything goes well this time I will be leaving on the 25th of September for the festival. I would have loved to attend the week- long festival but since work beckons, I can only be there for 2 days. I am looking forward to attend the festival as it gives a global platform to new talent to showcase their work. The only criteria being that the short film, documentary or a full length feature film has to be made by an Indian or the film should be based in India."

So finally we can say 'All's well that ends well Iqbal'

LadyZaib 10 years ago the pictures from the festival are awesome u guyz rocked ittt!!

virgo_gurl 10 years ago Aww poor iqbal im glad he got the visa though..love u MIK

-MOTHER- 10 years ago Have a safe trip.Hope you will come back soon.We will miss you in Sangini.

bollyboi_cows18 10 years ago im from america and no i do not welcome him. go make films in ur deserts

-MOTHER- 10 years ago Have a safe trip.Hope everything goes according to your wish.love your acting.

jakr 10 years ago U are an awsome actor . Also a great human being . go to greater hights good luck for the trip

-MOTHER- 10 years ago Have a safe trip.All the very bbest to you.

i wish i live din houston..to meet you heheheh