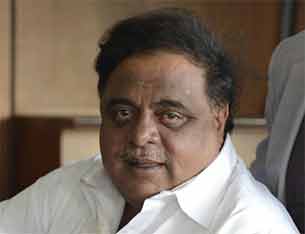 Ailing Kannada actor-turned-politician M.H. Ambareesh, who has been undergoing treatment at a hospital here for breathing-related problems for over a week, may be shifted to Singapore Saturday for further treatment.

He is currently at Vikram Hospital here.

Ambareesh, Minister for Housing, has been undergoing treatment at the hospital since Feb 21. His family has expressed interest to shift him to Mount Elizabeth hospital in Singapore.

"His wife (Sumalatha) has expressed interest to shift him to Mount Elizabeth hospital in Singapore. Doctors at Vikram hospital have been constantly in touch with the doctors in Singapore over the last few days. They have been briefing them about his health condition," a source from Vikram Hospital told IANS.

On Friday, Randeep Guleria, professor and head, Department of Pulmonary Medicine and Sleep Disorders at the All-India Institute Medical Sciences (AIIMS), flew down to attend to Ambareesh.

"Doctor Randeep said that his condition is stable and all his vital organs are functioning well but he still seems to be facing problems with ventilation. Two doctors are likely to accompany him to Singapore in a chartered flight," the source added.

"We are not aware about all that. It was his wife who wanted him to be shifted. All arrangements are being made for the trip," source said.