Star Plus and Rajan Shahi's Sapna Babul Ka.. Bidaai will see the entry of a new girl in Alekh's life!! With Sadhana (Sara Khan)forced to go out of the Rajvansh house, Alekh (Angad Hasija) has engrossed himself in his work and new project, and aims to take his company to a new high! 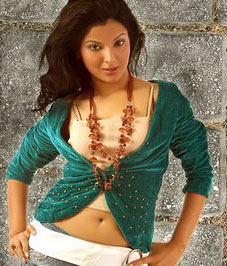 Tonight's episode will see the entry of a new character Mallika Mehra who will go on to be Alekh's main support when it comes to his professional career.

According to our source, "Smriti Sinha will play the role of this very dynamic and powerful business woman, Mallika Mehra. She is very professional about her work, so much so that she comes across as an arrogant lady, who is devoid of human sentiments. She will be interacting with Alekh and it is heard that their professional relationship will turn into friendship as the story unfolds".

When called up, Smriti Sinha confirmed the news and said, "Yes, my entry will be aired tonight. Mine is a very strong and positive character; she is a powerful business woman who is the MD of her company. She is taking care of the business on behalf of her father. She will have a lot of interaction with Alekh, as she will promote Alekh's company".

If the buzz is to be believed, Mallika's character will have a very important role to play in the life of Alekh and Sadhana.

Angad Hasija tells us, "Yes, it is true that a new character will be entering who will be Alekh's support in his professional career. She is this stubborn kind of a business woman who can even throw an employee out of the company for no reason at all. When she encounters Alekh who is so very down-to-earth and humble, she will have a change in her mindset".

As for the Ranveer (Kinshuk Mahajan) track, our source tells us that Rajvansh family will soon go to a higher court to fight the case of Ranveer. In the coming episodes, they will get successful and Ranveer will soon be out of jail. However, Sadhana will not be back to the Rajvansh house hold very soon. There is a lot to play with before the union of Alekh and Sadhana is shown.

Well, we just hope that Alekh and the new girl remain to be just good friends and nothing more than that!!

pankhi 10 years ago Ridiculous. Only one thing is good about article is that RANVIR will back soon.

prettyasjen 10 years ago I want this woman to marry Alekh! She'll handle Vasu very well... I hope Sadna finds someone too, Alekh doesn't deserve her!

suresh555 10 years ago Let Alekh marry this woman. Sounds like she will be a right match for Vasu

-Imu.M- 10 years ago I agree with you Guddi, He surely is turning into a Sissy

-SalShah4eva- 10 years ago goood for him
made for each other..hope sadi find her partner too

ASRdeewani 10 years ago nooooo
i hope they dont fall in love!!
good, at least ranvir will be out soon.

SecretKhabri420 10 years ago This girl seem to make troubles to SaLekh,I hope not, I want Sadhna back to Aalekh, but not easily, Aalekh should get a lesson, as well as Vasu.........

--Princess-- 10 years ago just good friends and nothing more..we can only hope !