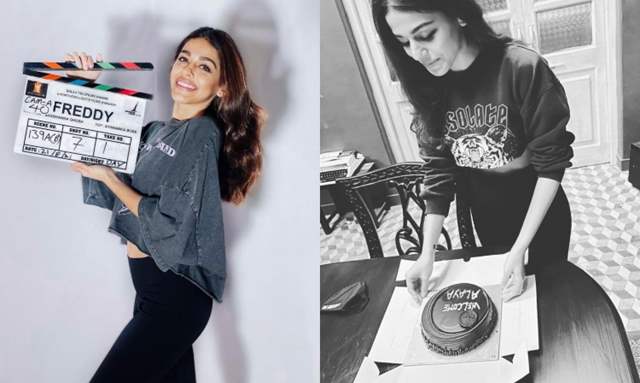 Freddy, a film co-produced by Balaji Telefilms and Northern Lights Films, stars Kartik Aaryan in the lead role. It was previously reported that Alaya F would be appearing in an Ekta Kapoor project, but now she confirmed her participation in upcoming film Freddy, which will be Alaya's second collaboration with Ekta Kapoor.

On Sunday, the actress took to her social media account and officially announced her joining the Freddy team. The actress was seen holding a clapboard of the film, as she shared a picture on her profile and wrote, “Ready for Freddy! Sooooo happy to be on board with the most wonderful team!”

Her Freddy co-star Kartik Aaryan and the whole team also welcomed her arrival with a surprise cake with “Welcome Alaya” written on it. Kartik Aaryan also shared a picture of Alaya cutting the cake on his Instagram account, with a fun caption “Welcome @alayaf From Freddy. Under which, Alaya commented “When did you decide to post this!!” To which Kartik replied, “Freddy loves to give surprises.”

Freddy is Ekta Kapoor and Shashanka Ghosh's second film together following the success of Veere Di Wedding. According to Shashanka, Freddy will provide the audience with an exciting cinematic experience and promises to take viewers on a dark and chilling roller-coaster ride filled with unexpected twists and turns.

Freddy is a Hindi remake of a 2016 Kannada supernatural thriller starring Shraddha Srinath, written, directed, and produced by Pawan.

Alaya made her film debut in 2020 with the comedy Jawaani Jaaneman, alongside Saif Ali Khan. Last month, she also began filming for the Hindi remake of Kannada thriller U-Turn.