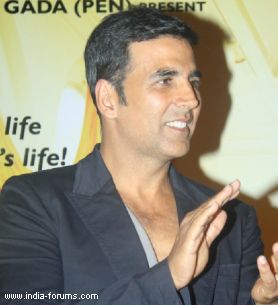 Bollywood star Akshay Kumar, who shares the screen space with many actors in "It's Entertainment", says his chemistry with the dog was better than any one else in the forthcoming movie.

"Dogs can be your best friends, but you can't compare them with human beings. You get to learn a lot if you have pets. Once we finished shooting, it was difficult for all of us as we all missed the dog in the film," Akshay told reporters Monday at the trailer launch of "It's Entertainment".

"More than me, the audience will go gaga over the dog in the film. My chemistry with the dog is better than anyone else. It was so much fun," added the 46-year-old.

Directed by writer duo Sajid-Farhad, "It's Entertainment" also features Tamannaah Bhatia, among others.

But it was not easy to work with the dog.

"It's not easy shooting with dogs. You have to understand their mood completely. We had four to five dogs on the sets and we used to finish our shoot first, then we used to take their shots," said Akshay.