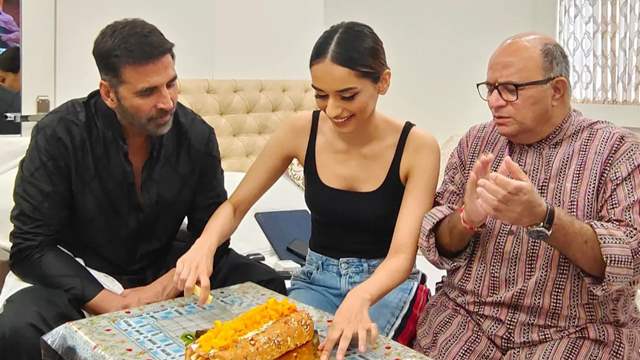 Manushi Chhillar will be seen in Akshay Kumar's historical drama Prithviraj soon. The former Miss World and Khiladi Kumar have been aggressively advertising their flick. In the midst of everything, Akshay surprised Manushi with a cake for her birthday.

Manushi came to Instagram a few hours ago to post a nice photo with her co-star Akshay Kumar and their director Dr. Chandraprakash Dwivedi.

The debutant actress is sporting in a black spaghetti top and blue denim leggings as she poses with Akshay and Mr. Dwivedi in the shot. Her hair was pulled back into a neat bun with a centre parting, and her makeup was glammed up with eyeliner and flushed cheeks. As the trio exchange warm grins, she can be seen cutting the cake placed in front of her on a table.

“Thank you @akshaykumar sir for this surprise! My birthday month is only getting special! (yellow heart emoji) #DrChandraprakashDwivedi #PrithvirajPromotions #SpecialBirthdayMoment"

The trailer for the epic historical drama Prithviraj was released a few weeks ago. Manushi will play Rajkumari Sanyogita, while Akshay will play Samrat Prithviraj Chauhan. It will also be Akshay's first period picture, something he is quite enthused about.

Prithviraj is produced by Yashraj Films and is set to hit theatres on June 3rd.