The story begins with the showcase of 'innocence tipping balance to foolishness' of Prem (Ranbir Kapoor). That's just the start of many Charlie Chaplinesque comical moments. Prem and his gang of good-for-nothing friends 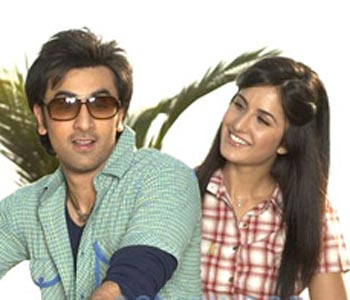 open up the Happy Club; read their hangout place where they try to solve their love problems or simply pass time. It's when one of Prem's friend needs to rescue his damsel in distress that his chance meeting of Jenny(Katrina Kaif) happens.

What till now was expected to be a romantic comedy turns into a slightly emotional film. However, there are some splendid moments when literally your human brain doesn't know how to react. That's where we bow to director Rajkumar Santoshi. For one, there's a scene where Jenny stammers because she is upset. When Ranbir tries to console her he stammers too because he suffers from the same problem. Oh but Katrina doesn't know this. So what does she do? One tight slap! 'For making a mockery of my sad situation'- as she puts it. You simply don't know how to react. You feel sorry for Ranbir, sorry for the hurt Katrina…but then why does the snigger sneak up on you ? Because the situation IS funny. You'll know it when you go watch it. Oh yes, you can empty your wallet for this one!

However, don't forget the mindless adjective used to describe this movie. Because simply it beats everyone whatever happened between Jenny and Prem on the bridge. It so obviously gives the impression that Jenny accepts Prem's proposal?! Even so, when Prem goes to Goa to rescue Jenny from her forced marriage to Tony, Jenny spring out 'Rahul's name out of the blue. Err…excuse me? Who's this new fella? Yes…so while we're thinking that Prem's world comes crashing down because Jenny apparently is in love with Rahul(Upen Patel), her school friend who's returned from Canada. 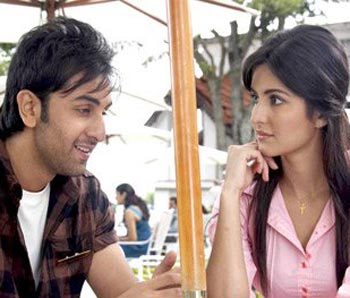 But Prem had promised himself that he'd love Jenny with 'no complaint, no demand.' So the boy sticks with her and helps her get married to Rahul. However, the interaction between Prem and Rahul gets a bit drab.

This part of the film has been beautifully used for the subtle sarcasm of our country's failings. Right from Rahul's politician father Pitamber (Govind Namdeo) who doesn't want his son to marry a Christian girl 'cause he'll lose out on all the Hindu votes, to the part where a mail train can easily be stopped over a bridge for the convenience of lover-girl, and yes, the slice of media which behaves like 'hungry wolves' for juicy stories!

Jenny eventually realizes that she can never be happy with Rahul and that her true love is Prem. And at the end Prem's grammatically incorrect English prayer to Jesus God is answered and his photo gets permanently stuck on Jenny's heart!

Advertisements have been strategically hidden in the screenplay with even Ranbir mouthing his youngistaan dialougue- 'Chaaho Toh Kuch Bhi Hai Asaan'.

Salman Khan easily proves why he is the sweetheart of so many. His cameo is mind blowing and even his dialogues are painfully witty!

Pritam's scores are good. Tu jaane na takes you into a trance, Aatif Aslam's another gift to India. Prem ki naiyya would simply refuse to stop ringing in your heads. None of the songs seem out of place and they've been shot in some of the best places!

Action sequences are good with smart special effects. But they are neither gritty nor gory. Infact, the combination of Prem n Jen doing action makes you feel like you're watching a fusion of Superman and Power Puff Girls! Kids are sure to have a blast!!

Ranbir's many avatar's are awe-inspiring. He perfectly brings out the rawness of an uneducated person as well as the sophistication of a gentleman. Katrina is an eye-candy in every shot and a goddess in Tu jaane na. The movie has been superbly peppered with antics from the supporting cast too. Thanks to them the faked quirky horniness of Prem's mother Shalini(Smita Jaykar), Shankar's (Darshan Jariwala) efforts to straighten out his son, and the laughter infusing frustration of the broke Don Sajin (Zakir Hussain)have been nicely brought out.