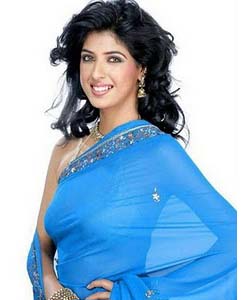 Aishwarya Sakhuja aka Tanya of Sony TV's Saas Bina Sasural has bagged a nick name on sets, and her unit members love to pull her legs by calling her, 'Aishwarya Dada'... Wondering why?

Well, we hear that Aishwarya is not of the typical feminine type, who loves to be amidst girls. She also does not have the habit of running to her green room to get touch-ups done to her makeup. Instead, she loves to be in the company of men. She actually has a blast on the sets with the men around her.

Our source from the sets says, "Tanya's marriage is like a blessing in disguise for Aishwarya. She enjoys shooting with the men and makes fun of them too. Due to her boyish attitude, she is refered to as Dada by the production people".

We contacted Aishwarya Sakhuja to know more on the same, "Yes, actually I never like to be very feminine and love to freak out with my gang. I enjoy the jokes instead of going to the make up room; you will never find me spending time with lipsticks and touch up. I am loving the atmosphere on the sets as I am with lot of males now, it is very much enjoyable and jolly."

No wonder why Aishwarya was chosen for this show...

+ 5
10 years ago heheh that's cute! love the show..she's doing a brilliant job in it