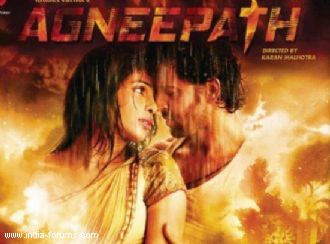 Karan Johar's "Agneepath" remake has received a thumbs up from Bollywood celebrities, who attended a special screening of the much-awaited movie here.

The Tuesday night screening saw attendance from celebrities like Arbaaz Khan and Arjun Rampal and they are all impressed with the remake of the 1990 film.

The Hrithik Roshan, Sanjay Dutt and Priyanka Chopra-starrer, directed by debutant Karan Malhotra, is set for release Thursday, and here's what B-Town had to say about it:

Arjun Rampal: It was mind blowing. It's a superb film. Go and watch "Agneepath." You guys are going to be blown away.

Zayed Khan: All the performances are fabulous. Finally, superb kind of movies are back. It's amazing. Hrithik, Sanjay, Priyanka, everybody was outstanding.

Arbaaz Khan: I think the director has done a fantastic job and it's a very good remake of the earlier "Agneepath". Sanjay's performance is fantastic, Hrithik is looking very good and he has acted very well as well. I think the star of the film is the director.

Dino Morea: I think the remake that they have made is amazing. Hrithik and Sanjay have done a fabulous job. It was fantastic.