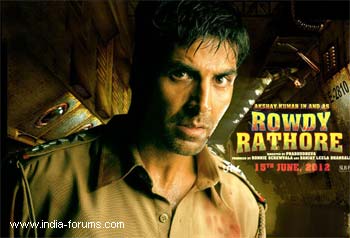 Actor Akshay Kumar, who will be seen in a full-fledged action film "Rowdy Rathore" after almost seven years, says he feels like a newcomer and is very excited about getting into the action mode again.

"There is a lot of excitement. After seven years I am again doing action. It was because of action that I came into this industry and again I am getting a chance to do action. I am feeling as if I am a newcomer who will be doing action for the first time after seven years," the 44-year-old said at the launch "Rowdy Rathore" promo.

"I started my career with action. So, action is always going to be very close to my heart. It is in me and that is all I am going to keep doing to do this till the day I die," added the 44-year-old who was seen in actioners like "Khiladi", "Mohra" and "Sangharsh".

Recently Salman Khan too featured into action movies like "Ready", "Bodyguard" and "Dabangg", but refuses to draw any comparisons between him and Salman.

"We work in the industry together. We are not race horses that we will be tagged with one or two number. Such numbers do not work. I don't compare myself to anyone. He is my friend. He does his work and I just do my work," he said.

Beofre that Akshay's "Housefull 2" will come out April 5.