View Profile
It is said “matches are made in heaven” but in bollywood it more seems like it’s made on the film sets. Aftab & Aamna didn't know each other before they signed the film, but they instantly connected with each other from day one.  They fell in love on the sets of Anuj Saxena's Maverick productions film titles 'Aloo Chaat.'


Aftab is known for his charming attitude and was previously involved with Yana gupta. Aamna too was rumored to be seeing Rajiv Khandelwal, but they never ever accepted it. Aftab is very sensitive by nature and adores the woman he is in love with. He keeps telling Aamna to call him Faffy and not Affy which is often referred to him in film industry.


Aamna is equally in love with him. Full on romance is going on. People have spotted Aftab's car 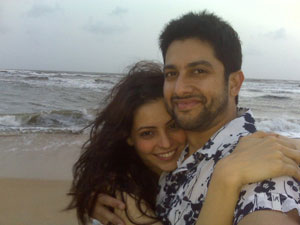 
Aftab is quite well-known for hiding his personal life, but we think he should be man enough to accept it. After all it is he who chose to be in the entertainment industry where fans love to know about personal life. Sources also revealed that Aamna personally celebrated his birthday few months back, secretly in Los Angeles.  These days she is also keeping low profile and is not even making any public appearances.


In a way Aamna has not only got a launch from actor Anuj Saxena (who is the producer of Aloo Chaat under his production house Maveick) in the form of a film but also a true love in the form of Aftab Shivdasani who is head over heels over her and vice versa.


Aftab and Aamna should better understand “Ishq chupaye nahi chupta”…. A leading tabloid recently carried their personal pictures letting the pictures speak thousand words. We wonder what the point in hiding their love, when the whole world already knows about it!