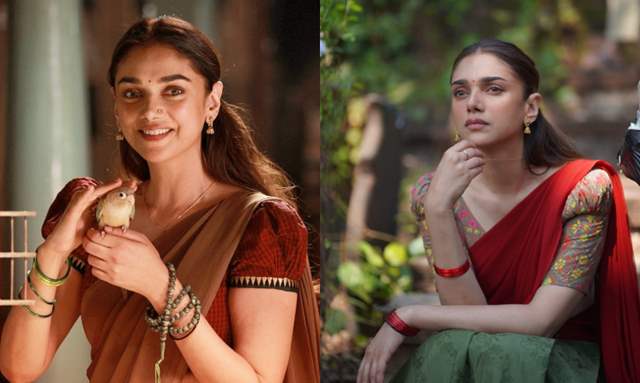 The most loved Malayalam movie Sufiyum Sujatayum starring Aditi Rao Hydari, Dev Mohan and Jayasurya was released on the OTT platform today in 2020 and gave the audience one of the most poetic love stories.

Marking her first film in Malayalam, Aditi Rao Hydari, with debutant Dev Mohan and Malyalam star Jayasurya. Sufiyum Sujatayum was director Naranipuzha Shanavas’ debut film and it won over the hearts of audiences across countries.

Fans across all social media platforms were swooning over Aditi Rao Hydari's mesmeric beauty in the film.

Aditi aced the nuances of a mute girl Sujaata using just her expressive eyes and training in classical dance and gave one of the most compelling and endearing performances on screen. Dev Mohan as Sufi was equally captivating and left a strong impression.

Looking back at her character, Aditi revealed,

"I loved playing Sujata, her innocence, stubborn determination and fearless belief in love will always stay with me. Today especially I wish the Director Naranipuzha Shanavas was here with us to see how much the world he created with Sufiyum Sujatayum was loved by people."

Even after a year of its release, the film and its music strikes a chord with everyone, breaking the language barrier because of the emotion it evokes in people.

The film is written and directed by Naranipuzha Shanavas and produced by Vijay Babu under his banner Friday Film House. The film is shot by cinematographer Anu Moothedath and edited by Deepu Joseph. Sufiyum Sujatayum is brought together by executive producer Vinay Babu. Make sure to witness eternal love come musically to life, on the screens, in the romantic drama film!

Meanwhile, on the work front, Aditi is working on the Tamil romantic comedy Hey Sinamika alongside Dulquer Salmaan and Kajal Aggarwal.