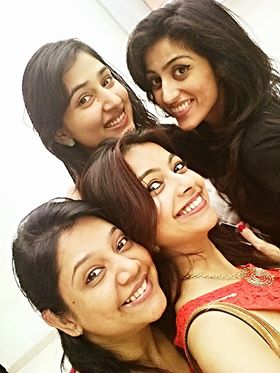 Pyaar Ka Dard Hai...Meetha Meetha Pyaara Pyaara... (Rajshri Productions) went off air in the last quarter of 2014. In most cases, the cast of the show get so much involved with their lives that they hardly get time to catch up with each other. Well, that definitely is not the case with the girls of Pyaar Ka Dard Hain...

When contacted, Disha, who essayed the role of Pankhuri, she said, "It was not a proper reunion but the four of us i.e. Monica Khanna, Monica, Sonali and I had met for a lunch. It was really nice to see all of them because it has been really long we hadn't met each other. It was fantastic."

We also got in touch with Sonali Naik, who essayed the role of Sheela Mami and she said, "All of us met at Oberoi Mall yesterday and later went for lunch at BBC. Initially when all of us met, we were just laughing but eventually we got into that talking spree. Later, did some window shopping and went for the movie MSG. Monica had to leave early as she had some work but Disha and me went to meet our Rajshri cast on the set of Mere Rang Mein Ranganewali on Life OK. We actually spent some quality time with each other."

6 years ago Wohooo...feeling so happy to see my fav stars.Dishu,Sonali,Monica'sss rocks.

+ 2
9 years ago spare us u dirty mind , i cant understand that u DAUGHTER helps u out with ur dirty movies, isnt that a bit shameless for ur buddhi ghusat Pooja? and i pity ur younger daughter aswell