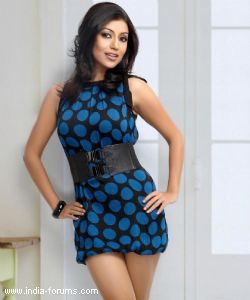 The names of contestants who suffered minor to major injuries while shooting for Imagine's Zor Ka Jhatka went on an ascending curve by the time the shoot got over. One such contestant who suffered a terrible accident that actually lead to her having stitches is Debina Bonnerjee.

Our source from the show states, "There were many people who got injured like Akashdeep Saigal, Gaurav Chopra, Payal Rohatgi, Debina etc. Debina had to in fact get stitches on her lower lips because of the fall she had".

We contacted Debina who is still to get out of the hangover of shooting in Argentina. "Yes, the cut on my lips was very bad. I have got few stitches and it is in the healing process now. Actually it was a very scary stunt and I had half a mind to back out of it. But at the last minute I decided to give it a try. While doing the stunt, my face hit the platform, but I neglected it to be a small injury. But my crew members asked me to consult the doctor immediately. And I was shocked when the doctor told me that I required few stitches on my lips. It was exactly 3 in the night in India and I so wanted to talk to Guru (Gurmeet Choudhary) then. I called him and he was so very supportive and of great moral support to me".

If sources are to be believed, Manas Katyal, one of the suitors of Rakhi Sawant in her Swayamvar had to move out of the show after fracturing his hand.

Well, we will get to see all these accidents happening right on our TV sets from February 1st on Imagine's Zor Ka Jhatka..

hello dear debina di luv u so much

prava55663 9 years ago Debina you are wonderful actor...love you performance in Ramayan..
Keep up the good work...

,who make others happy with nice things

they do generous people,and warm hearted too,

Hope your birthday brings you happiness In everything u do,

for today's a celebration of a special person you.
JUST FOR U JANU

The warmest wish a

message can convey for

all the joys and love

of a very special day

I m all alone

I close my eyes

The thought of you

Warm me inside and

Makes me smile
I WISH''

And many the coming year

To make every day wonderful for u

TOP TEN REASONS WITH I LOVE U

ON BIRTHDAY YOU R

SimplyAparajita 9 years ago Get well soon sweet heart..love you gurmeet..he is alwez there for his lady love whether its 3 at night or 4 at night..god bless you both..:):)

*~*Kamala*~* 9 years ago Some people are so childish jeez..Gurmeet and Debina are together and seem to love each other very much..lets leave it at that. I know that Gurmeet and Drashti make a very cute couple but that doesn't mean we have to the ones they are actually with.

Jaya Saha to be Arrested by the NCB Soon: Report
11 minutes ago

Shaheer Sheikh opens up on getting offers from Bollywood in ...
34 minutes ago

"This NEWS is FALSE, MALICIOUS & MISCHIEVOUS": Nikhil Slams ...
42 minutes ago