View Profile
Ram Gopal Verma is the messiah for all wannabe stars who come to Mumbai to make it big. Good or bad, he is one filmmaker who is not scared to launch greenhorns in lead roles for most of his films. Little wonder that his latest film Contract has two new actors playing the male and female leads. While Adhvik Mahajan, a guy from Jalandhar is playing the male lead, Saakshi Gulati, model and Miss Delhi 2006 will be playing the female lead. For both of them this will be the first time in front of the camera of such a big name. 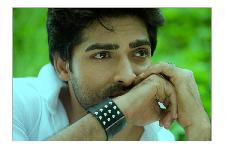 
"I have been modeling for quite some time now and have walked the ramp number of times. In fact I was crowned Miss Delhi in 2006 and was part of the Miss India pageant in 2007. So while, this is my first big break in the film industry, it is not my first step into the glamour world," says a pretty and confident Sakshi Gulati. Technically, this is not the first film for Sakshi either. "I had done a small role in Delhi Heights," says the actress.

For Adhvik Mahajan, however, this is his first brush with greasepaint and arclights. "I followed the typical road any struggler in Bollywood follows. I came to Mumbai last year to make it big in the industry. After meeting innumerable producers and submitting my portfolio, I got a call from Ram Gopal Verma's office. And to my joy, it had some good news about me getting selected for Contract," says the boy from Punjab who was always interested in acting.
"I used to be a regular on the theatre circuit in my native place," informs Adhvik.

But getting the role in Contract was no cakewalk for Adhvik. "After I met Ram Gopal Verma and he narrated the storyline to me, I had to undergo innumerable tests for three months before I was selected. I had to pass all kinds of test – voice, looks and acting – for this movie. Only after I passed all these was I able to sign the contract for  Contract," says Adhvik.

Sakshi's decision, understandably, took lesser time. "I had completed a Barry John workshop on acting and had come to Mumbai from Delhi looking for a good break. When I heard that Ramu ji was looking for a lead heroine for Conract, I met him after I passed the first test with the Casting Director.. Everything happened so fast that before I knew what was happening, I appeared for a screen test and got selected. I have no clues as to why Ramu ji chose me!" says the pretty heroine.

Adhvik plays the role of Aman, a lower middle class guy who always becomes the right person in the wrong place. His luck takes him to the underworld where he reaches a point of no return and gets entangled in a number of controversies. Sakshi, on the other hand, plays the role of Iya who is already involved with the underworld and falls in love with Adhvik. The film revolves around their love story in the backdrop of the terrorism that has engulfed the commercial capital of India.

Though their roles are completely different and they come from different backgrounds, both are unilateral in praising their mentor – Ram Gopal Verma. Says Adhvik, "Ramu ji is the best example of the proverb which says you should not judge a person based on how he looks. No one proves this better than Ramu ji herself. He is very kindhearted and treats newcomers very well on the set. He is so open to ideas that even spotboys can go and tell him about their suggestions," says a indebted Adhvik.   "The only word that can describe Ramuji is 'marvelous'. The kind of independence he gives to us newcomers is exemplary. He explains every scene so well and guides people a lot," says Saakshi.

Both the newbies are now looking for films and evaluating scripts. With the lukewarm response that Contract has got from audiences, it is not going to be easy for Saakshi and Adhvik to find something good. But both of them are extremely determined and had always walked that extra mile to reach perfection. Best of luck Sakshi and Adhvik!