Perseverance coupled with mental and physical stability is very much needed to survive and sail thro’ the too demanding shooting schedules in television, and the elimination this week in Sony’s Kabhi Kabhii Pyaar… proves it to the ‘T’… 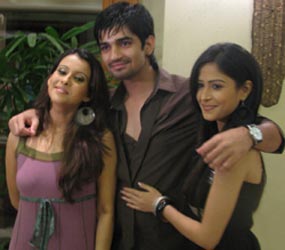 Featured Video
The very cute trio of Vishal Singh-Dimple Jhangiani-Proneeta had one bad day at the office that spoilt their chances of moving ahead in the competition, as they happen to be the third team to get out!

Giving us information is our well-placed source from the sets, “Vishal and Dimple have always been commended by the judges for their on-stage chemistry, but nothing went right for them this week. As they started to perform, Dimple blanked out on stage and could not continue her performance, courtesy an overdose of work and sleepless nights for nearly a week. Vishal’s attempts to motivate her to continue were in vain as Dimple just refused to dance”.

But the irony for Vishal was that unlike the earlier episodes, he performed exceptionally well with his pyaar Proneeta. “All the judges, especially Mahesh Bhatt was so impressed by Vishal and Proneeta’s performance that he pointed fingers at Dimple and told her that she should have supported her partner and should have carried on with her performance from where she stopped. He went on to say that had she delivered even a decent performance, they would have been safe”, quips our source.

A very disappointed Dimple wept on the sets and had nothing left to do, but curse her ill-fate on the day.

14 years ago Rocking advert. The jingle is so catchy. WOW! Wish I could catch Hrithik like that. I wont call him brother though :P

14 years ago Oh No!!!!!!!
I loved their jodi!!!!!
Dimple was a excellent dancer!!!!!
I feel sad for her becuz of Mahesh's words towards her.
I hope they come back in the comeback episode.

14 years ago hmmm every jodi exits in some news worthy way...lets see in wht circumstances the next jodi gets eliminated...

+ 2
14 years ago I saw this episode, I was really dissapointedI really wished she continued with her performance.

14 years ago yeah dimple's expression was so weird when she couldnt remem her dance...sux... i actually like ayan and shanaya jodi in KIT becuz theyre too funny...especially the way ayan gets annoyed and irritated at shanaya..lols

+ 2
14 years ago this really sucks,I really liked this group,and was hoping they would make it far,in this show,and especially Dimple,she's an amazing dancer.They should've gave this group another chance.

14 years ago thanks, that sux... but what could she do, they are to overworked... i guess everything happens for a reason! Hope they come back as a wildcard or something!