As BollyCurry this month gears up to revisit various eras of Bollywood, this week we share a tiny glimpse of movies released in the electric 80s. The decade is generally marked as one to lack innovation and to churn out movies of a repetitive concept, yet there are a few films that have surpassed the stereotypes and have greatly entertained the audiences. So read below as BollyCurry presents to you the plots of the movies that fall into the mentioned genre and have stuck out in the era as gems worth value.
Qurbani 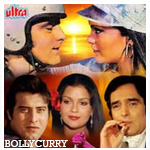 The 70s heavily explored the relationship between friends/siblings and the consequences of what certain actions can do to that relationship. However, one cannot argue that Qurbani (1980) was different. The story revolves around two men: Rajesh (Feroz Khan), an expert in breaking locks, and Aman (Vinod Khanna), a widower who worked for Rakka (Amrish Puri) before leaving his gang. Rajesh falls in love with the cabaret dancer Sheela (Zeenat Aman) and decides to give up his life of crime for her. He service his time in jail and upon release, he becomes friends with Aman. Soon he is blamed for Rakka's death and Vikram (Shakti Kapoor) and Jwala (Aruna Irani) create circumstances as such that Rajesh feels that Aman is the killer and took the opportunity to run away with Sheela. How this issue is resolved and what happens next forms the rest of this movie.
Hero 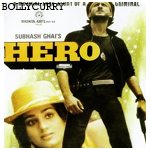 Hero (1983) revolves around Pasha (Amrish Puri) who has been arrested by Shrikanth Mathur (Shammi Kapoor). In order to escape his predicament, he writes to Jackie (Jackie Shroff) who attends to Shrikanth and decides to impersonate a police officer to kidnap Shrikanth's daughter, Radha (Meenakshi Seshadri). The two slowly fall in love but things start to fall apart as Radha realizes that Jackie is a goon. This forces Jackie to transform himself to keep Radha, which he eventually achieves. The story encounters a major twist when Jimmy (Shakti Kapoor) falls for Radha as well whilst Pasha is released from prison and takes revenge on Jimmy. The climax involves the union of Jacky and Radha.
Jaane Bhi Do Yaaro 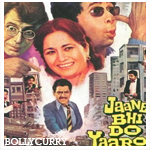 A dark satire on based on the corruption of Indian politics and news system, Jaane Bhi Do Yaaro (1983) is movie focusing on two photographers, Sudhir (Ravi Baswani) and Vinod (Naseeruddin Shah), both who are disastrous photographers. They start working on a story to reveal corrupt builders Tarneja (Pankaj Kapoor) and Ahuja (Om Puri) as well as the Municipal Commissioner, D'Mello (Satish Shah). While participating in a photography contest, the two take a photo of a murder. In order to expose the murder, the duo go on many escapades with the final shot of the film signifying the end of honesty and justice in the world of corruption.
Nagina 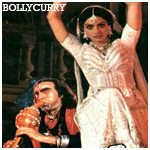 As the title suggests, the basis of sci-fi fantasy movie Nagina (1986) is formed around a snake. Rajiv (Rishi Kapoor), a son of a rich man, expresses his desire to marry Rajni (Sridevi). The two get married and for a while spend a happy married life. However, they hit rocky paths when a Sadhu, Bhairo Nath (Amrish Puri), states to Rajiv that Rajni is a actually snake who has come to take revenge for the death of her spouse while Rajiv was a child. He plays the snake dance song, which Rajni dances to, but manages to escape before Rajiv bears witness. The story unravels further to reveal a sinister plot involving Bhairo Nath and his attempt at world domination using Rajni. However, Rajiv saves the day and married couple return to a blissful union.
Mr. India 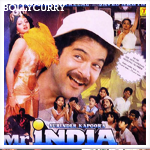 Another sci-fi film, Mr. India (1987) focuses on a strange device that Arun Verma's (Anil Kapoor) father created; anyone wearing it can become invisible. Arun runs a happy orphanage when he is unable to earn enough to continue running the orphanage, he enrolls a paying guest, the journalist Seema (Sridevi). At first Seema hates the children but slowly she develops a loving relationship with them. By this time, the epic villain Mogambo (Amrish Puri) is introduced as a man who wants to rule over India though his minions and missles. However, Arun comes across his father's device and with its help, eventually manages to thwart Mogambo.
Salaam Bombay! 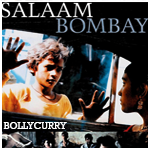 A turn of the century film, Salaam Bombay! (1988) opened eyes for many to the treatment of the poor and children. Krishna (Shafiq Syed) is continuously bullied by his elder brother and in a fit of rage he burns his brother's motorcycle, which lands him in trouble with his mother. To earn the money to repair the bike, his mother takes him to a circus and orders him to earn 500 rupees before returning home. When the circus owner sends him on an errand, the former hastily packs up and leaves. Krishna eventually travels to Bombay to earn the money he was ordered to but is robbed of his meager possessions. He follows the thieves, befriends them and ends up in a red light district of the city. Changing names to Chaipau, he harbors a crush for a prostitute who he fails to rescue, commits petty crimes for which he narrowly escapes and ends up returning to the "dark" world still trying to earn the money to return home.
Qayamat Se Qayamat Tak 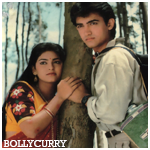 Qayamat Se Qayamat Tak (1988) focuses on the love saga of Raj (Aamir Khan) and Rashmi (Juhi Chawla), both who belong to members of opposing clans. As is the case with such stories, the love saga is unable to fulfill its happy destiny and fails to bond the two families, resulting in a tragic end. The movie turned out to be a perfect launchpad for debutantes Aamir Khan and Juhi Chawla as both won Filmfare Awards for their roles. It has also gone on to become another cult film added to the list of love sagas with a tragic ending.
The above are just a few movies that came to mind when we thought of the 80s. Have we missed your favorite? Let us know in the comments below and we'll be back once again with a bunch of movies of the succeeding decade. Stay tuned!
Writer: Vaishnavi V.
Editors: Shreya S. and Jenifer Y.
Graphics: Inderpreet K.
Do you have a suggestion or comment for BollyCurry? Drop us a PM at BC_Dropbox today!
5 Likes