The good news is that this series is not without context. South Africa will be playing for World Cup Super League points. And they are desperate to get them. The better news - for them - is that they are doing it against a second-string Indian side that doesn't have too much riding on these three matches, and could be ripe for the picking.

But the bad news? There isn't any really, except if you were hoping to see India's best ODI players on display over the next six days. Oh, and there is a lot of rain around - especially for the first two matches - which could put a dampener on the whole thing.

According to the visitors' opening batter Janneman Malan, they are approaching this series as if they are "in a submarine" to try to block out the distractions caused by Mark Boucher's imminent departure as head coach, the disappointment over captain Temba Bavuma's non-purchase at the SA20, and the concerns over his form leading onto the T20 World Cup (more on that later).

Instead of pondering on all that, South Africa are applying a laser-like focus to the task at hand - getting themselves as close as possible to automatic qualification for the ODI World Cup next year, which will be played in India and where they are getting a small taste of the kind action they don't want to miss out on.

Since full-capacity crowds were allowed back into Indian grounds with South Africa's visit for five T20Is in June earlier this year, the stadiums have been packed with the noise and colour the Covid-19 pandemic robbed us of. It is those people that India's coach Rahul Dravid - who will not be in charge of the ODI team as he makes an early exit for Australia - told the broadcasters after the third T20I that India have relished playing for. They have had a glut of white-ball home fixtures - which, you could argue, will be lost in the bigger picture - but India coach Dravid recognised the joy it brought to spectators. Context matters, of course, but cricket can also be just cricket. 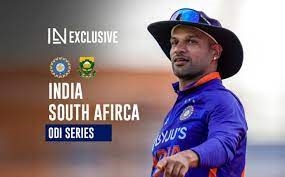 The anticipation around Royal Challengers Bangalore star Rajat Patidar could come to an end if he makes his international debut in this series, but he is competing with Rahul Tripathi, who has been around the national set-up for the past few months.

However, all eyes will still be on Deepak Chahar, who has made a successful comeback from a torn quadriceps, and is on the radar as one of Jasprit Bumrah's replacements in India's T20 World Cup squad.

South Africa are not deploying any of their players to Australia for the T20 World Cup early, so will have their full-strength squad at their disposal. Bavuma is expected to be a straight swap for the injured Rassie van der Dussen from the England series, with the rest of the middle order - Aiden Markram, Heinrich Klaasen and David Miller - likely to remain consistent.

Andile Phehlukwayo and Marco Jansen, both T20 World Cup squad reserves, could come into contention for the allrounder's spot, with South Africa likely to try and field their strongest attack in what is a must-win series. 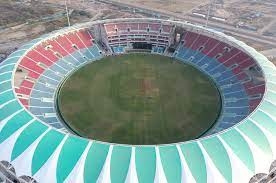 Neither team has ever played an ODI at Lucknow's Ekana Stadium, with the majority of its international fixtures being between Afghanistan and West Indies in 2019. There, in three ODIs, the average first innings score was 230, which suggests the ground may not support quick scoring. However, India have played two T20Is at the ground and put up totals of 195 and 199, which may indicate differently. It has been raining significantly in Lucknow, and showers are expected for most of the day.

According to reports from weather.com, the temperature of Lucknow city of India on October 6 (Thursday) will be 26° Celcius during the day and fall to 23° Celcius at night. The sky will witness thunderstorms throughout the day.

South Africa lie in 11th place on the World Cup Super League points table, with four victories and 49 points from 13 games so far. After forfeiting the three-match series in Australia, the maximum number of points available to them from here is 80: 30 vs India, 30 vs England and 20 vs Netherlands.

That means if they win all their remaining matches - and have no over-rate violations which result in a points penalty - they will end up on a total of 129 points. England, Australia, Bangladesh and Pakistan already have 120, with six matches left to play.

South Africa and India were due to play in Lucknow in March 2020 but the match was cancelled as the Covid-19 pandemic began to impact the world and thus the sport. The stadium has hosted three other ODIs - all between Afghanistan and West Indies in 2019.

"Everyone knows how important the next eight games are for the Proteas in the ODI format. We are trying to maximise the points. The World Cup is in India. It's nice to get good prep and put in good performances to hopefully join the tournament."

South Africa will do everything they can to make sure they get to next year's World Cup, according to Janneman Malan

What to expect: Neither team can say, because neither have played an ODI here before. And neither might be able to say after Thursday, when significant rain has been forecast.

Is this part of Super League?

Raji, Thanks js for the tag