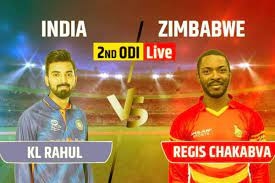 It was a near-perfect performance from India in the opening ODI against Zimbabwe in Harare, as they bowled out the home side for a mere 189 and chased down the target in just over 30 overs, without losing a single wicket - Shikhar Dhawan and Shubman Gill putting on their third century-plus stand in the last four ODIs they have batted together at the top.

Moving forward, the Indian think tank would be pleased with Deepak Chahar's noteworthy performance as he generated swing and bowled with discipline on his return from a back injury. However, the other returning member of the playing XI and the captain of this side - KL Rahul - couldn't get an opportunity to find his batting rhythm as India hunted down the total having not lost a wicket.

Overall, India's plans and execution were also on the money in the first ODI, with the pace trio - Chahar, Mohammed Siraj and Prasidh Krishna - sharing seven wickets between them. The subtext to India's fine bowling show was the visitors have now bagged 26 wickets in their last 13 games in the powerplay in the 50-over format. Incidentally, between August 2019 to December 2021, India had snared only 10 wickets in 21 ODI matches in that phase.

Their opponent, Zimbabwe, came into the series on a high, having won both the T20I and ODI rubbers. There were still a couple of concerns during the course of their ODI series against Bangladesh, and one of them was lack of runs from the top order. In fact, the hosts had been reduced to 6 for 2, 27 for 3 and 18 for 3 in the three ODIs versus Bangladesh. But against a stronger opposition, they couldn't wade through early troubles after being reduced to 31 for 4.

The likes of Innocent Kaia (the top order bat has struggled to notch up substantial scores after compiling a hundred in the first ODI versus Bangladesh), Tadiwanashe Marumani, Wesley Madhevere and Takudzwanashe Kaitano have to at least wade through the initial period, so that the middle order gets the required platform to build and later on press the accelerator pedal.

India vs Zimbabwe Second ODI will take place at Harare Sports Club. The weather seems to be mostly sunny in Harare on Saturday. The match is unlikely to be affected by rain as there are zero chances of precipitation showers during the day. The maximum temperature will hover just below 28 degrees Celsius during the game. The wind speed on the day will be somewhere around 11 km/h.

The pitches of Harare Sports club usually aid bowlers, especially pacers. The surface with a slight grass covering will provide consistent bounce and carry for the bowlers. However, the clear sky is likely to offer help to batters as well. Batters will get value for their shots and the outfield will also be quite quick.

India has multiple 300-plus scores at this venue.

India: India could go in with an unchanged playing XI for the second game. And if in case the visitors clinch the series with a victory, then they could tinker with the playing XI.

Zimbabwe: If Zimbabwe are looking to tinker with the struggling top order, then Kaitano is one of the options. Occasionally, Milton Shumba has also batted at the top in the longest format.

The teams have played a total of 64 ODIs, with India having the advantage of 52 victories. Zimbabwe has registered 10 wins. The two teams drew twice in ODIs, first in 1993 (Indore) and then in 1997 (Paarl). The two teams first faced off in an ODI game in 1983, the eighth match of the Prudential World Cup in Leicester.

The two sides have played eight bilateral series, with India emerging victorious seven times. Zimbabwe has won just one, a two-match series in 1996-97. While they won the opening match by eight wickets, the second game was cancelled. Since July 2013, India has won 13 consecutive ODI matches against Zimbabwe with their most recent encounter ending in a 10-wicket victory at Harare in 2022.

Sean Williams, who has been Zimbabwe's backbone in the batting order for many years, hasn't been in form of late. His most recent scores read 1, 2, 8, 33 and 28. On Thursday, he played his first ODI since January this year, after missing the games against Afghanistan and Bangladesh for personal reasons. With regular captain Craig Ervine out of this series with injury, Zimbabwe will want Williams to go back to playing more patiently and anchor the innings to help them to competitive totals.

Shubman Gill has been making a strong case to be India's back-up opener for the foreseeable future, and possibly even at the 2023 ODI World Cup. His 82 off 72 balls against Zimbabwe followed scores of 64, 43 and 98 not out against West Indies and the fact that he continued to open even when Rahul was in the XI suggests that perhaps, when the time comes, India see him taking over the role on a more permanent basis.

Soon after KL Rahul won the toss in the first game, it was all about Deepak Chahar who bowled seven overs on the trot on his comeback after six long months. He started gingerly, then found his rhythm, then swung the ball both ways and took care of Zimbabwe's top order on his own.

We are less then 10 minutes away from the toss.

India won the toss and chose to field.  No surprises there.