Kash tomorrow first ball pe hi we get a wicket

The hosts were 101 for two at the close.

South Africa were almost halfway to the target with only one wicket down in the last over of the day when wicketkeeper Pant flung himself to his right and held a catch to dismiss Dean Elgar, the home team's captain and star of a similar run chase in the second Test in Johannesburg.

Elgar, on 30, was initially given not out as he shaped to glance Jasprit Bumrah down the leg side. But an Indian review showed a faint spike as the ball went past the bat.

An earlier successful review by Elgar after he was given out leg before to off-spinner Ravichandran Ashwin seemed to anger the Indians.

They clearly felt the ball was hitting the stumps, but the ball tracking technology showed it was just clearing the top of the wicket.

Indian bowling coach Paras Mhambrey said the tourists remained confident that they could win a series in South Africa for the first time.

“There is something in the wicket,” said Mhambrey. “We can create opportunities. There is a patch there where the ball bounces more. We've got to be patient on a pitch like this. We have to hit the right areas and hit those areas more consistently.”

Mhambrey praised Pant, who ran out of partners after hitting six fours and four sixes in 139-ball innings.

“He gave us a great opportunity to win a Test match.” 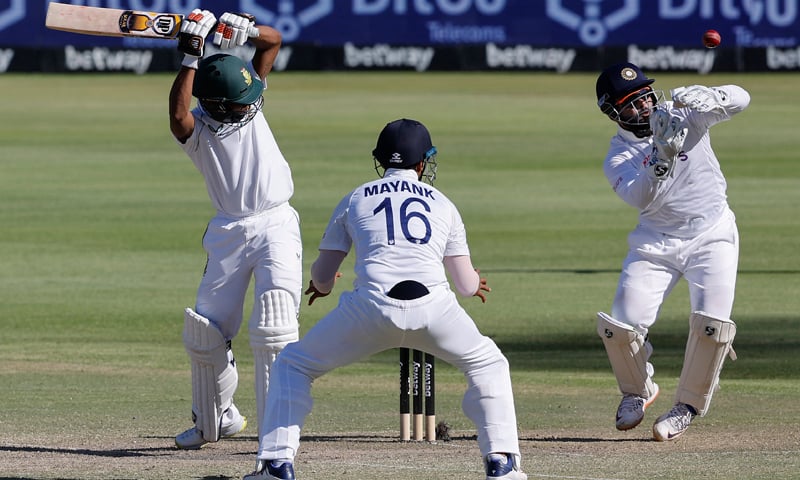 But expecting a miracle from our bowlers.

But expecting a miracle from our bowlers.

Thanks to Soni and Busy Bee for all the clarifications.

While we are at introductions, let me introduce you to Madhuri, our topic maker Viswasruti's real name.

Meet you all in the evening, when play resumes at 7:30PM my time.

can anyone explain me the dean elgar controversy?! like why indian players were annoyed with the lbw decision!

can anyone explain me the dean elgar controversy?! like why indian players were annoyed with the lbw decision!

Dean Elgar was declared out owing to a LBW on Ashwin's bowl.

On field umpire also declared him to be out. Honestly at the length the bowl hit his pad everybody were convinced he's out.

Just out of hope, Elgar looked upto DRS (he was himself at loss of hope)

But DRS revealed the bowl missing stumps owing to the excess bounce. (Trust me doesn't look like it at the first impression without bowl tracking. I myself thought it will hit way below the bells)

That's how everyone on the field got annoyed and VK went a step ahead in showing it. He was being too sarcastic from there on.