Sportsmanship isn't about criticizing  players, it's about appreciating and supporting their hard work amidst success and failures!!!

The 41st match of the ICC T20 World Cup 2021 will see Pakistan facing off against Scotland today.

Unbeaten Pakistan will be squaring off against the win-less Scotland in the 41st game.

This will be the last group stage game for both sides.

Pakistan has already qualified for the semis, with 4 wins on the trot. On the other hand, Scotland has lost 4 in a row and is standing last on the points table.

Pakistan last played Namibia at Abu Dhabi, where they managed to win the game by 45 runs. Pakistan opted to bat first on winning the toss.

They stitched another century partnership for the opening wicket and ended up piling 189 runs for the loss of just 2 wickets. Mohammad Rizwan struck an unbeaten 79 off 50 balls, while Babar Azam stacked 70 runs.

On the other hand, Scotland faced India in their second-last group stage match at Dubai International Cricket Stadium, where they were blown away in what proved to be an extremely one-sided game.

India batted ruthlessly and chased down this total in just 39 deliveries and added the third-fastest victory against a side in a World Cup game to their name.

A lot will be on offer to learn for the young Scottish side from the experienced Pak team. This exposure against big teams at such a big stage will help them and their players become better with time. 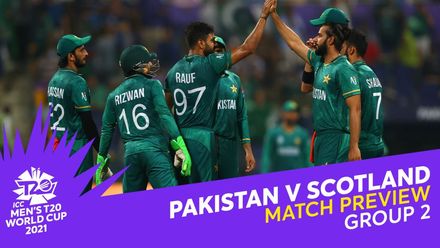 The Sharjah Cricket Association Stadium provides a neutral wicket where both the departments are predicted to obtain a generous amount of help from the surface. Spinners can come lethal in the middle overs once again here.

The average first innings score on this wicket is 149.

The team batting second doesn’t enjoy good records here. They have a winning percentage of 40 on this track.

Considering the form of these two sides, Pakistan is expected to win this match of the ICC T20 World Cup 2021 quite convincingly.

Must win match for Pakistan