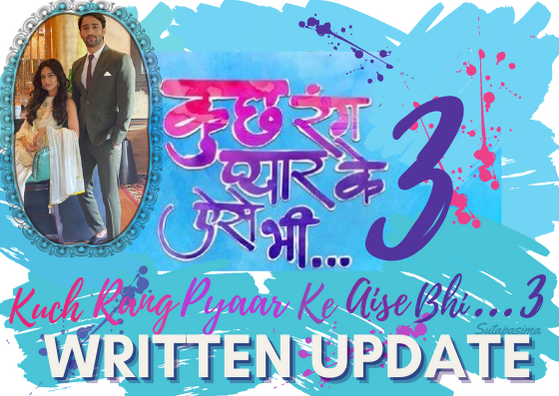 Dev is working on his lap top on the swing … he puts it aside as Sona arrives . Sona comes and feels guilty for annoying him, she places her head on his shoulder n apologises . She asks him if he still loved her , he says he got up at 6AM to do yoga with her, gifted her a key chain , wore her Fav colour to please her , returned back from office early to spend time with her , were these not signs ?? Could she not see it herself .

Sona  and Dev are in bed close together, she places her head on his chest n feels this was the most pleasurable moment for her , so close to Dev

At Sanjana’s house she tells Reema that it was destiny that brought her  in contact with Dev ,she didn’t come  between Devakshi . And Dev was a single piece , she could not give up so easily .

She sprays a perfume and breathes in deeply .. she tells Reema and this was Dev’s special perfum n she feels this would get her close to Dev one day. Sanjana says Dev liked her .

Reema says some day she should see the reality of her situation , hopefully some one will show the futility of all this to her .

Sanjana gets a call from the society secretary that she was single unmarried and they needed to verify the work place .

Sanjana wants adev to come n verify this for her himself . She door bell goes , she rushes to the door as she tell ps Reema that Dev had come for her . She is taken aback as she finds Vicky there . H e is well known to that Aradhana society secretary and their wives here for friends. So Vicky is sure he will help her out in getting the rented apartment of her choice , Sanjana is disappointed .

Sanjana is sure Dev will walk up to her with love one day .

Sona is enjoying her close moments with Dev , she Dev confirms Vicky will represent their company for Sanjana’s requirement . Sona thinks no one had rights to come between them

Next morning Cute moments as Dev is getting dressed for work n Shubh , Soham Ayush w ter their room and there are cute family moments between them .

Dev is seen getting a phone. All informing the preponement of the scheduled meeting . He leaves hurriedly ,

After the kids leave for school and Dev for office Sona notices a gift from Sanjana . Marked To Dev Sir , with love actor Sanjana “ Sona wonders what this girl was up to . Some  discusses the situation with Jotin as office , he tells that they the girl liked the guy and was trying to catch his attention .She was giving hints ,

Later Jotin catches Sona streets eating , splurging on cup cakes , he remarks she was a nutritionist n she should avoid them herself , she should do meditation n yoga .


At  Bose house Bijoy fumes on Saurabh for over spending on ordering food from outside , he asks him it have home cooked food . Saurabh remarks about the exotic Darjeeling tea he was relishing daily . they are interrupted by the arrival of Their PG who is all battered n bruised , Bijoy is concerned and worried for him, he informs he got injured while practising boxing . He is seen refusing to take calls on his mobile . Bijoy gets suspicious

At office the employees have arranged everything for their preponed meeting . Sanjana is seen serving everyone home made tasty break fast spread , she mutters happily how she convinced the other party to prepone their meeting , she plotted this to make Dev compensate for not coming to her rescue last night at Aradhana society’.
later Dev bags the deal and all congratulate Dev , Sanjana also congratulates him and Dev feels strange as he feels her holding his hand for a longish time . He feels awkward .

Dev is seen singing on stage with a guitar , Sanjana is dressed like Karishma and Sona like Madhuri Dixit . It’s a Bollywood themed party

Dev feels like holding sanjana's hand for long??? Is that what u meant ..y so? Will he also start liking her?what non sense is this

Dev feels like holding sanjana's hand for long??? Is that what u meant ..y so? Will he also start liking her?what non sense is this

I think she meant Dev feels strange because Sanjana keeps holding his hand for a long time.

If so, it’s about time he begins to understand how weirdly this psycho is behaving with him !

No idea! We’re all waiting for her to leave but I think she will stay for a while …

Sanju thought Dev himself will come to validate her in her society dumping his wife & children at the middle of the night? For God's sake! Dev is the chairman of the company where Sanju works at a very junior level. Even Vicky wasn't needed there. She doesn't have any immediate TL or Manager to report to or what?

And since Dev didn't ditch his family at the middle of the night to come to her rescue, she decided Dev needed to make it upto her & so planfully cut his morning time with his family short by rescheduling the meeting before its time? Does she ever stop to think exactly WHY should Dev choose her over his wife & kids? Who the hell is she?

And who the hell is she to reschedule & change meeting timings? Who gave her that authority? I thought only employees of managers & higher ranks could do such things. And conveniently no one isn't even going to find out that it was Serendipity, right?

At this point, Ishwari Infotech looks less systematic or organised than even a school club

P.S. - Thank you Sutapasima for the written update

I have never hated any character this much as I hate Sanjana .

I just feel like slapping her K-serial way , not that I support physical assaulting of women

I would have preferred Dev being temporarily attracted to another woman for some reason,  rather than him being dumb and stupid, not understanding Sanjana's behavior and advances ,

I would take ishwari's third wheeling over psycho sanjana's any day.