Wow today was a difficult episode to sit through, which has very rarely happened. The entire episode was a cringe fest with very little redeeming scenes that I was wondering if there was even a point to open a new thread. But then I remembered that if nothing else, at least we can use this opportunty to rant to our heart's content, so her is what I thought about today's "kapils" (In the loosest terms possible):

1. Adi & Imlie - So we saw that Adi & Imle continue with their dance practice (same montage we got yesterday with the door closed, thoda to additional dance ya convo dikha dete

) to prepare for their dance competition. Poore zoron se taiyyari chal rahi hai, that Adi forgot everything else, including checking his phone for an entire day (who does that. He is supposed to be a serious patrakar, koi office emergency hui toh?). Anyway, dono taiyyar hai to slay the competition, albeit with getting dahi & cheeni from Rupi di as well (how cute was that). I was surprised that of all things Adi noticed that Imlie was not wearing her ghungroo (Biwi ke saath rehte rehte aise cheezen notice karne lage hai BS

). He offers to go and get her ghungroo, which is Aparna's aashirwaad. Of course Imlie tries to be practical and reminds him that they are next, but he has full confidence that he will be back in minutes (well he can run like a dream

, so there is that, but no we did not get to see that either

) As usual humari abla naari gets locked in the room and as usual has forgotten his phone (Now this I am confused, where did he forget the phone. Venue mein toh nahi tha, as Imlie does not have it, neither did the other jr. T's & room mein locked tha, so it was not there either. Toh woh phone gaya kahaan?) Anyway, bechara, bin sahara Adi was left knocking the door with no one to help (Sundar kal aayega bachne humari abla naari ko

). Poor Imlie faced the prospect of getting disqualified as Adi did not turn up, but looks like tomorrow she will do her jugaad & dance (again how the hell did she get ready like that in less than 5 mins, this girl is super girl

. Ek toh he forgot the date of his last counselling session (chalo dance aur baaki ke tension ke chakkar mein bhool gaya, I can give him that) Second when Malini came all the way to remind him, he is like - just wait for 10 mins, main bas abhi dance karke tumhare saath aaya

. Man the guy who felt this entire BBC is nonsense, is willing to postpone the counselling session for his divorce to dance with his first wife. And for all of you who will say that this is the ishara that he wants to delay the divorce (I am looking at you Flowerji

) I will not agree. He just has his priorities fixed & he is a horse with tunnel vision just looking at his first wife - Imlie

3. Diabolic trio - BKK, CKK & AC - Okay, so today AC ne apna rang dikhaya, with manipulating Aparna to prove her loyalty to Malini. Ab Aparna theri Adi ki maa, how dare AC question her loyalty & bhakti to Malini. So when she saw the opportunity, followed her son to lock him in his room to keep him from dancing with Imlie. What I found endearing is that she had a split second realization whether what she is doing is right. Uske man mein woh ek doubt aaya that uska yeh tareeka galat hai. But then with Radhaji's uksaana and AC's words playing in her mind, she decided to embrace the dark side by saying that no matter what, she will do anything to save her family's izzat. Though how the Tripathi's being disqualified is saving her family's izzat is beyond me, but looks like Aparna, just like her son, is having tunnel vision of not seeing beta & bahu dancing kapil dance on stage together

4. Sundar & Pallavi - Okay, special shoutout to Sundar who did one lovely kaam of telling his Malini madam that Adi is going to be dancing on stage with his wife. Matlab Malini's face was stunned that jo insaan 7 saal mein mere saath ek baar dance kiya, woh bhi because it was our sangeet and there also I had to drag him to dance, is voluntarily going to dance on stage for a society function. Yeh kaise ho gaya

. Anyway, also loved the bit where Sundar reminds Imlie that she should keep his laaj on stage and not dissapoint her teacher. How cute was that Imlie let him believe that his steps were going to be performed by them, I love these two, they are soo cute. Second shoutout to Pallavi who gave back to that society aunty who taunted that Imlie's husband ran away (you and Aparna both wish) to which she succintly reminded her that Imlie's family & husband are always there to support her. I love Pallo's character more and more, especially the way she passionately stand up and defends Imlie in every situation, unlike some other people ('cough' DD 'cough').

5. Malini & KC - Well all of us who assumed that DD will not be there this week, we were given a reality check from the first frame of the episode with a glum looking Malini moping around as KC did not call her. She reminded me of those teenagers who have had a fight with their crush and are sulking as they did not call back

. Anyway, we get KC on the other hand who is pheeling the pangs of being rude to Malini

. Matlab in dono ko dekhkar I FF most of the scene, coz they were soo cringey. Anyway, KC calls Malini on her landline, confirming she is at home & taunts her that he expected her to be at Adi's (that one was good

). She gets all blushing and shy talking to him and split second later when he reminds her that her last counselling session she flips into depression again. Matlab bechara even KC got confused that what does this crazy lady want

. But again she steeled herself to say that no, she will attend the session and complete the divorce proceedings.

So today the makers have tried to make a khichdi of everything, phir bhi dish tasty nahi bani. Oh well, hopefully kal ST ka dance may salvage the episode, so that we have something good to watch. 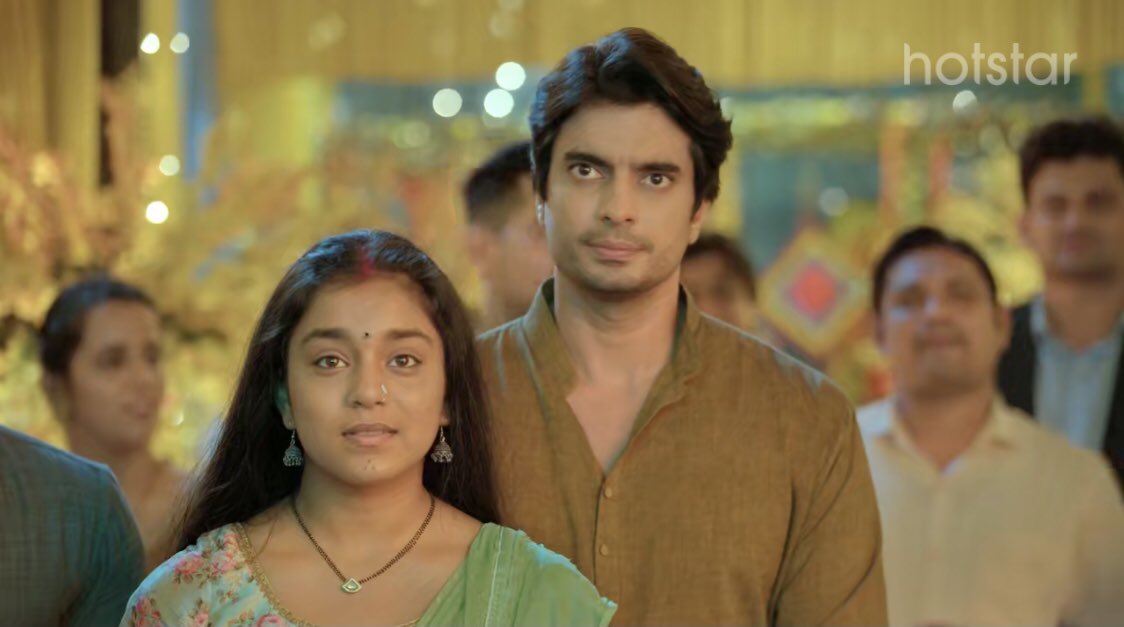 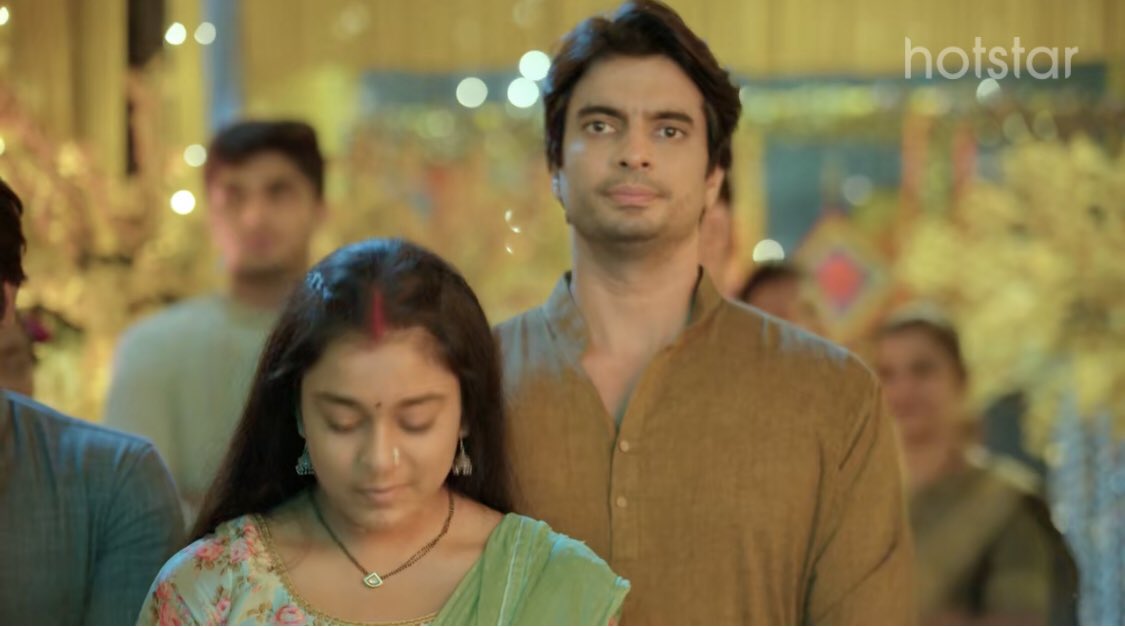 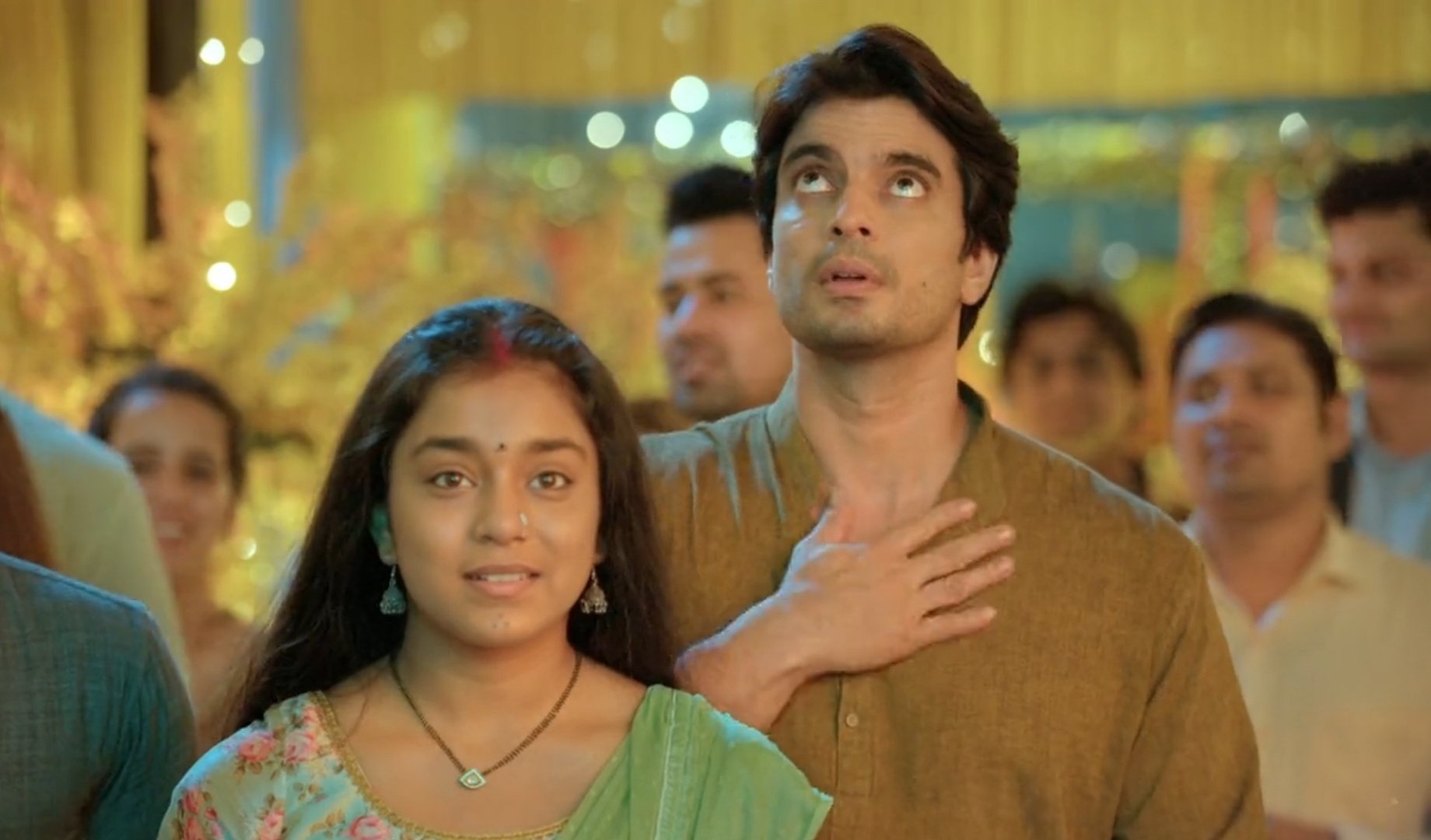 Mr and Mrs. Tripathi ready to dance and dressed up too...

Thanks Aps for writing this up and for posting.

Where do I begin -  nothing much to write about today.. the obvious... opener of Kunmun was expected.. chalo inki story me bhi P for progression ho rahi hai... they are missing eo.

and promptly locked the house behind him and left..

Next up was BS who was willing to dance and forego the counselling session...trying to get M to see his pov... said he will brb and went to get the ghungroos... leaving M befuddled... what was that..look...

Anu manipulating Apu, setting her plan in motion... instigating Apu to prove her loyalty to M.. this woman has no remorse... and cares for no one...

Worst was Apu saying sorry to Anu, how she was right from day one about Imlie, only they could not see it... to her eternal shame...pour on the guilt on the T's while you gloat over their misery..such a sad pathetic woman, that Anu is.

The jodis perform.. I ff'ed them all... and then Adi runs to get the ghungroos...

He went home and was he looking at the mirror... teek taak.. sab kuch.. before he headed for the door...

me think he was admiring himself.. in his getup..

He did not even hear the door close behind him or hear them whisper. ( the T elder ladies).. did I do the right thing by locking Adi in his room?? I cant differentiate between right n wrong... aww.. apu she looks so distressed here.

who is inspiring Rupi also to speak up in bhari sabha...

PT n HT are missing too.. looks they re happy to miss BBC...

Imlie dances and Adi says sorry to her... AC taunting Imlie yet again... all jadoo as Imlie dressed up quickly and had double costume, Adi ka photo..

I am looking forward to her dance tomorrow. Also reading everyone's take on today's episode..

tags part 5. Please forgive if I have missed anyone.

..As u said a difficult episode to sit through.. Filler mostly..

.. Baaki will catch up with you guys soon