The average age of the actresses who have worked with #SalmanKhan in his three-decades-long-career is 25.493 years. 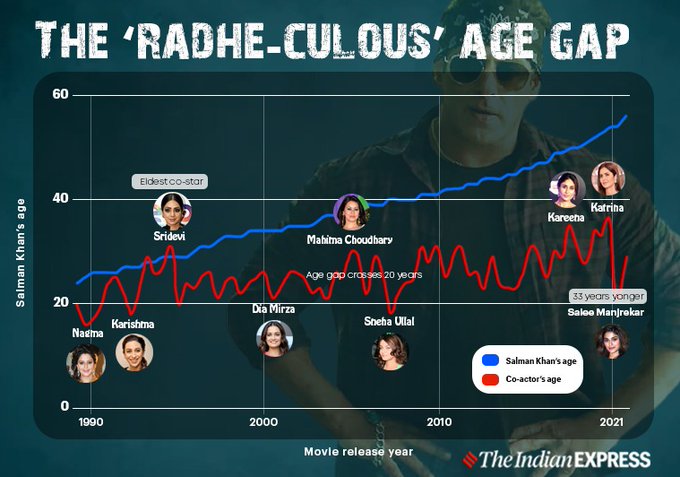 Are you worried about ageing? Do those grey hairs, dark circles and lines on the face bother you? Well, you must take anti-ageing tips from the mainstream Bollywood heroes who continue to work with actresses much younger than them. Bhaijaan of Bollywood Salman Khan is no exception who is defying the science and is growing younger by the day. You don’t agree? It doesn’t matter since Bollywood filmmakers and casting directors think otherwise. For them, Sallu ‘bhai’ has stopped ageing after 1990.

Even Dabangg Khan believes he looks the same age as his co-actor Disha Patani, 27 years younger than him, in his latest actioner Radhe: Your Most Wanted Bhai. In a making video of the Prabhu Dheva directorial, while talking about Disha Patani’s work in the movie, Salman said, “She has done a great job in the movie. She has looked very beautiful. We look the same age too. No, she did not look my age, I looked like hers.” FYI, Salman is 55 and Disha is 28.

In the first film of the hit franchise, Dabangg, Salman Khan, then 45, romanced a 23-year-old Sonakshi Sinha. Dabangg 3, which released in 2019, had him paired opposite 21-year-old Saiee Manjrekar, 33 years younger than Khan. Katrina Kaif, Sonam Kapoor, and Anushka Sharma were all in their 20s while Salman was around 50 when they featured together. The first time the age difference between Salman and his co-actor crossed 20 years was in his 2005 film Lucky: No Time for Love. At the time of the film’s release debutante actor Sneha Ulla was 17 and Salman was 40.

But who cares, because, in Hindi cinema, age is a number which affects the CV of an actress and not the superstars like Shah Rukh Khan, Akshay Kumar, Salman Khan and Aamir Khan. And it is not a trend that began recently, the ageist industry has been offering us combinations of a younger actress and a much older actor for decades now.

More important question is - Why? Why?

More important question is - Why? Why?

prabhu deva is just a good dancer. never was a good actor nor a good director...even his previous direction was a dud...wonder what sallu likes abt him

The bigger problem is forcefully inserting romantic subplot in every damn BW movie. None of Salman’s recent masala movies needed any romance or actress  opposite him at all . The day this stops I doubt we would see such pairings unless required by story

Damn seeing this on a chart hits different!

It would be interesting to see this for all actors!

It will be a problem if he was dating these girls

His pairing with Sneha Ullal was the most disturbing. Not only was she young but the resemblance to Ash was creepy

His pairing with Sneha Ullal was the most disturbing. Not only was she young but the resemblance to Ash was creepy

I find her prettier.  And she has a better personality. Btw , Wasn't her character underage in Lucky ?