If there's any today.

Rajmata says I want a straight answer of what I am asking. Is Kumud Veer’s mom? He’s shocked. Rajmata says I want a clear answer. He says I told you.. I have no relation with Veer’s mom. She says this isn’t the answer. He says when nothing is left, why question. This is a misunderstanding. She shows him the photos and says what is this then? Would you still keep me in dark? It’s my right to question. Answer me. Is Kumud Veer’s mom? Sanjay says yes. Rajmata slaps Sanjay.

Champa says these rich people don’t even care about our pain. No one even said why am I working in this condition. Rani looks for her shoes. She says Champa why are you working? You should rest. She says Rani sa said to work with one hand. Rani says but take care. You can ask other people. Did you see my heels? I took them off while dancing. Champa says I am not so lucky. But you are bahu rani now. You might have found it if you were not a DIL. You would be cleaning the house and find it. Rani says what’s the shame in cleaning your own house? I can clean all this. Champa says what did you do in Baliya that Rani sa accepted you? I mean.. She called you her DIL and gave you entry to Veer’s room? what is it? Rani comes close to her and looks through the glass. She walks around her.. Champa is confused. She says are you crazy? Rani says I am looking for the way.. To your mind. Or does it have plaster-like your hand? Is there any nut bolt? There’s dirt in it, I can clean it like my house. Where do you bring all this from? She says I have work and leaves. Rani looks for the shoes.

Rajeshwari comes to Rani. She says in her heart that’s your place, a lot below us. Rani says when did you come? Rajeshwari says your habit to question isn’t going awya. What are you doing here? She says I can’t find my heels. I took them off while dancing. Rajeshwari says the servants will find them for you. We can buy another one. You are not a maid now that you will use same shoe all over the years. I have planned a surprise for you in your room. Come let me take you there. Rajeshawari opens the door. The whole room is decorated. Rani says what is all this.. Rajeshwari says come on. Would I have to tell you. It’s all in front fo you. I got this all done specially for you. Rani sees the decorations around. Rajeshwari says did you like it? Rani says of course. You did all this for me. How can I not like it? You know.. After my dad, no one made me feel this special. Thank you Rani sa.

Kumud says if that secret is out everything would be ruined. I have to find those photos. Veer comes there and says ma.. Kumud turns back. Veer says I mean Rani sa.. She was so happy today. She accepted papa’s valentine’s gift as well. She has done a great favor on me by accepting Rani. I am so happy. I don’t know why am I telling you. I came to you to share my happiness. Maybe because you know me, you have taken care of me since childhood. You know I have waited for this day for so long. Today is so special I will never forget it.

Rani says I will never forget this day. Rajeshwari says I also prepared in a way that you will remember this day for your life. Let me show you the next surprise. Rani says another one.. Rani sa.. She smiles. Rajeshwri says come. Rajeshwari takes the cloth off from Rani’s photos. She says these are my photos from the party. Rajeshwari says you both look so happy and at peace. See the smile, it’s so pure. You are both laughing like you got everything in the world. No worry. After seeing these photos does it look like this girl’s dad is in jail? Rani is confused. Rajeshwari says the way this girl is dancing, does it look like her father is counting his last days in the jail? Rani drops the photos. Rajeshwari says daughter having fun, dad helpless. The man you didn’t want to stay with, who is your father’s sinner… Rani recalls what Veer said. Rajeshwari says no you are with the same person in his bedroom and life. The room is decorated for the wedding night? Do these photos look like this girl’s dad is in jail? Hold these tears. I have to tell you one more thing. Your dad’s case is fast-tracked. Court has decided not to give them much time. Soon he will have his verdict. I don’t know the verdict but the lawyer has run away. Rani is shocked. It’s surprising the girl danced, had fun and there, the father was given a death sentence. rani is shocked. How could you even imagine I could accept you. Who are you to sit next to us? This is Jaipur. Everything here is of Rajawat’s and I am the Rajeshwari Rajawat. And you were thinking to take my place? You are an ant. only my thumb is enough to rub you. You announced that you will take your dad back? Go and save him if you can. Rani stands there in shock. Check your phone once. Someone is dying to talk to you. All the best. She leaves. Rani looks at Vijay’s missed calls. She calls him. Vijay says where were you? I called you so much. Rani says is everything okay? He says nothing is okay. So much is going on in the case, you didn’t even pick my call. Come here fast, so many papers are pending. He will never get out of jail if we get anymore late. She hangs up. Rani cries.

Precap-Rani calls lawyer and says why did you leave the case? He says my choice. I won’t pick your call again. Rani runs out. Rajeshwair says there was always one queen

Episode was a disappointment. So much lead for such little drama. Fuski bomb episode.

Biggest reveal was DV accepting that Kumud is Veer's mother. Kudos to Rajmata for turning detective and figuring out the truth. Bless her soul for dealing with all this at her age. The slap was well deserved. DV ruined Veer's childhood and now that trauma has carried on to his adulthood. What's next? Rajmata revealing it to the whole house? Will Veer get the motherly love he has been craving for all these years? I am looking forward to a mother-son scene between Kumud and Veer.

Also WHY would they cast an actor that looks only a few years older than Veer to play his mother?

I really felt awful for Veer when he went to talk to Kumud. We make fun of him for his Ranisa chant. But this poor boy is so traumatized. He couldn't stop crying. He literally acted like a kid. I really hope he gets true motherly love that he deserves soon.

Rani is such a pro

Love how she dealt with Champa! She has a come back for everything. Like I have mentioned before, she gets her way and says everything she wants to in a way that doesn't come across offensive. I wish she was like this in front of Kiara too. I blame Veer for the manipulation and blaming that has been engraved in Rani's mind.

I also realized for the first time today that Rani's maiden name is Singh.

She wanted to show Rani her place and she does that by emotionally manipulating her and saying "how can you stay happy with the man because of whom your dad is in jail?"

C'mon, I was expecting so much more. Also, why did Ranisa decorate the whole room rather than just that table with the photos? What does she want?

She said "you are ready to celebrate suhagraat?"

None of this would matter if the next thing Rani does is go talk to Veer and Vikram about it. You can't break a woman like Rani like this after all that she is been through. The childhood horse story is the symbolism for this. She will find alternatives and still get her way. Ranisa is going to fall flat on her face with this eagerness like Kate has been saying.

Also CVs what kind of police station and court case is this? Which government office works outside of 9-5pm, please tell me? And if it is so urgent, I am sure there are multiple ways to reach a single person (call her husband, call her home, call her brother?). Thus far I was okay with the storyline but they are completely butchering it with lack of realism and unnecessary drama.

Not many to share today because it was a fuski episode. 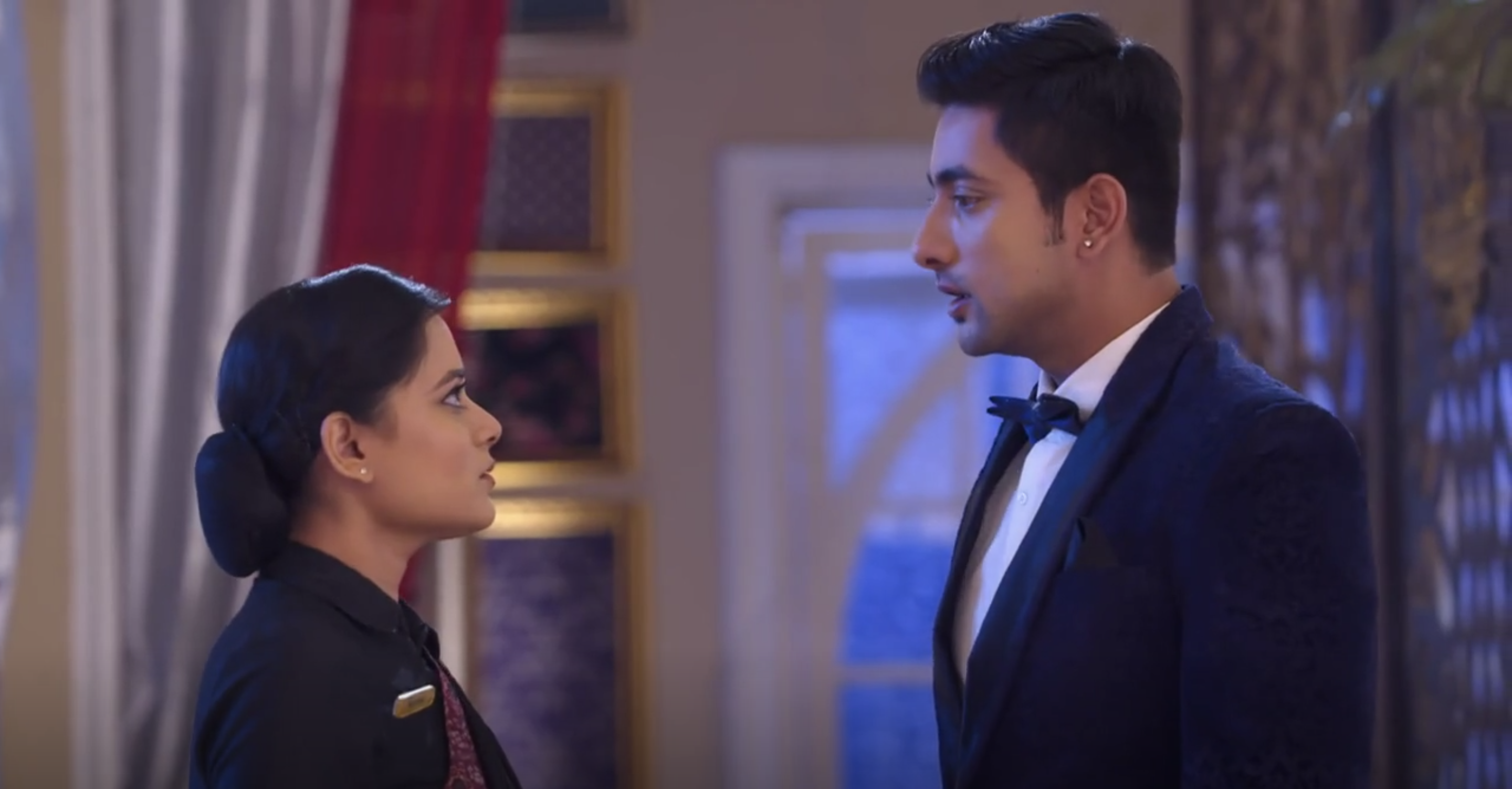 Hate you DV and Ranisa for traumatizing this baby. 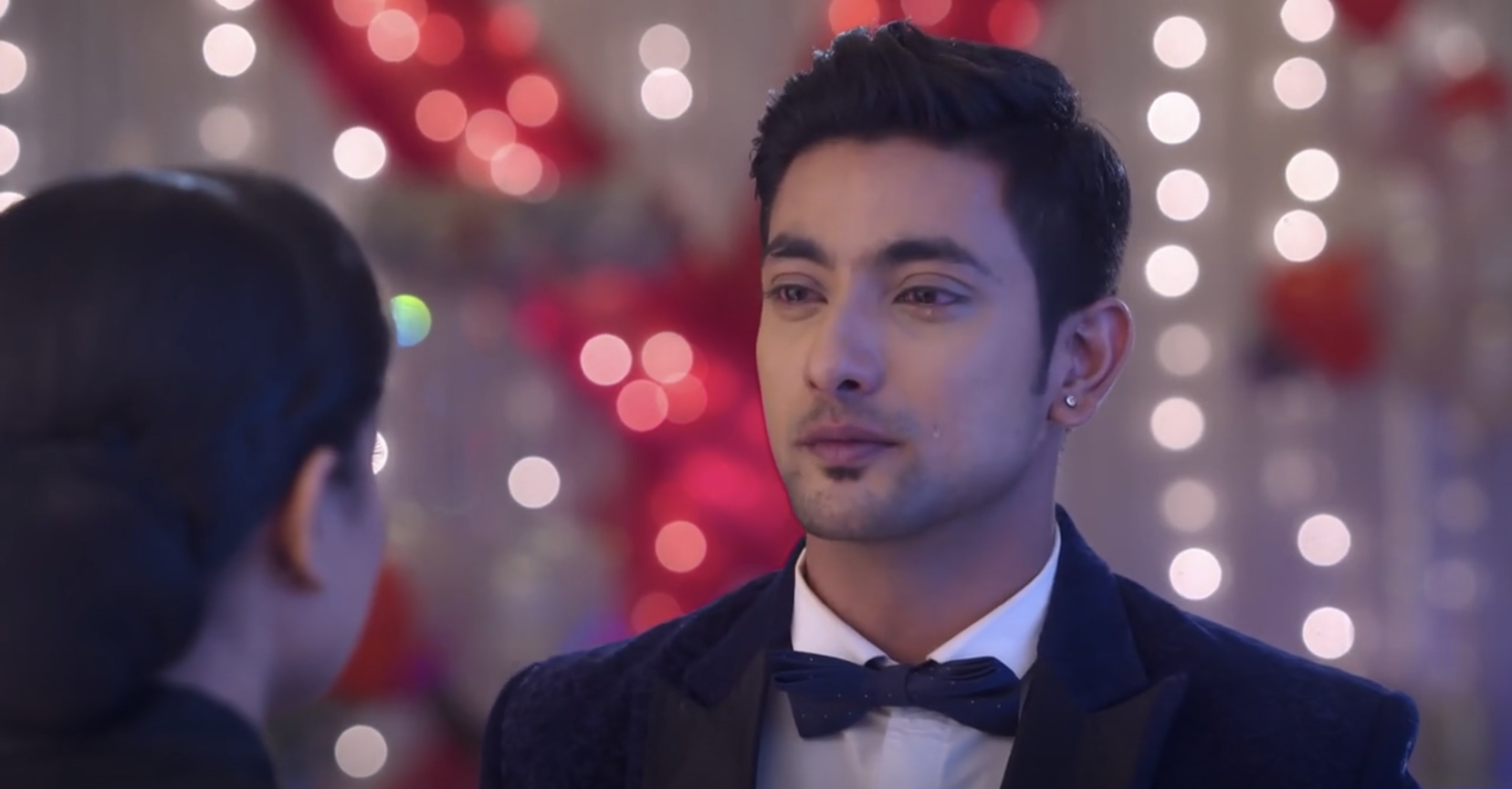 Need a picture of our queen with a fuski queen 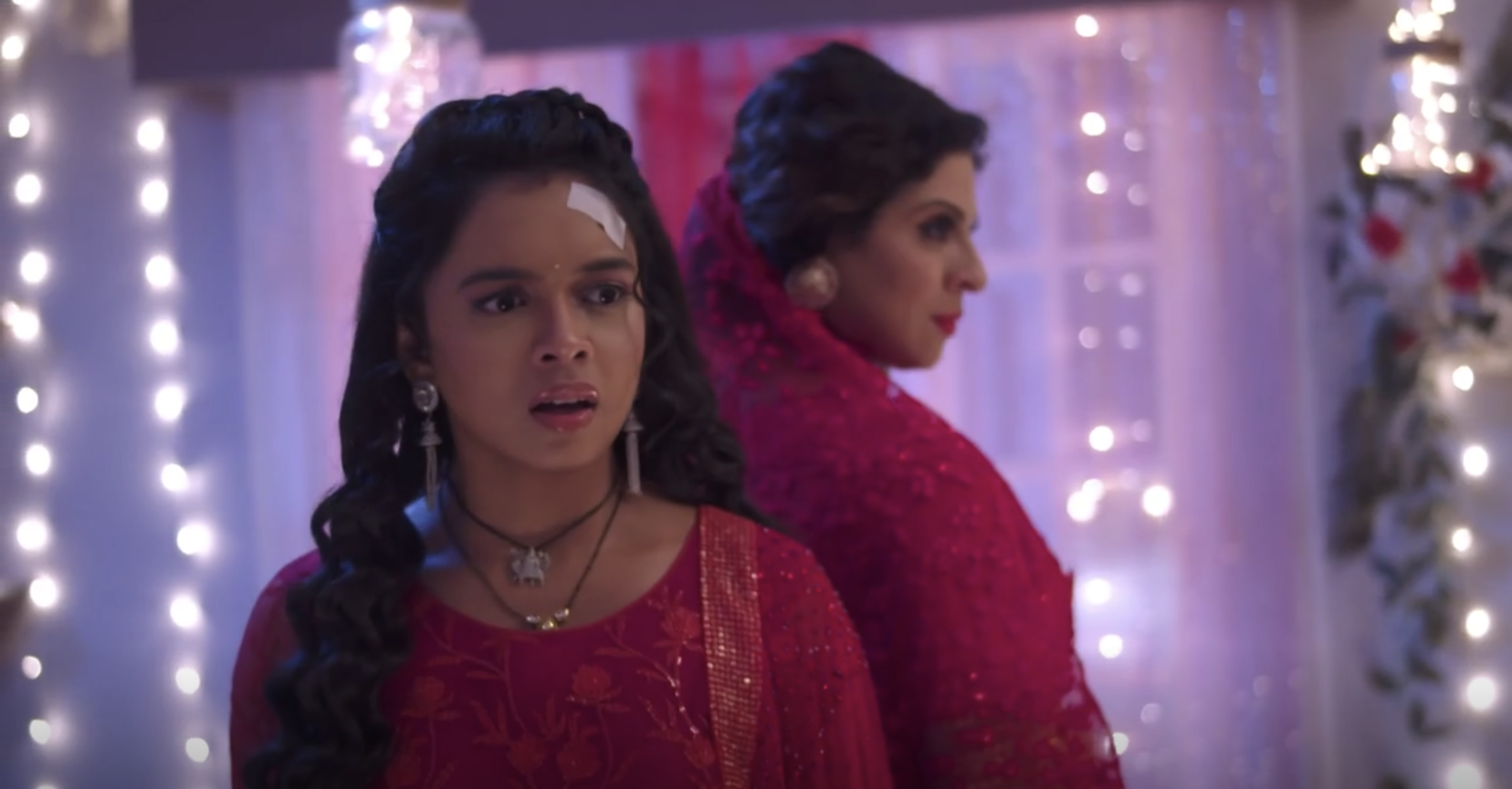 I just wanted to capture the decoration too 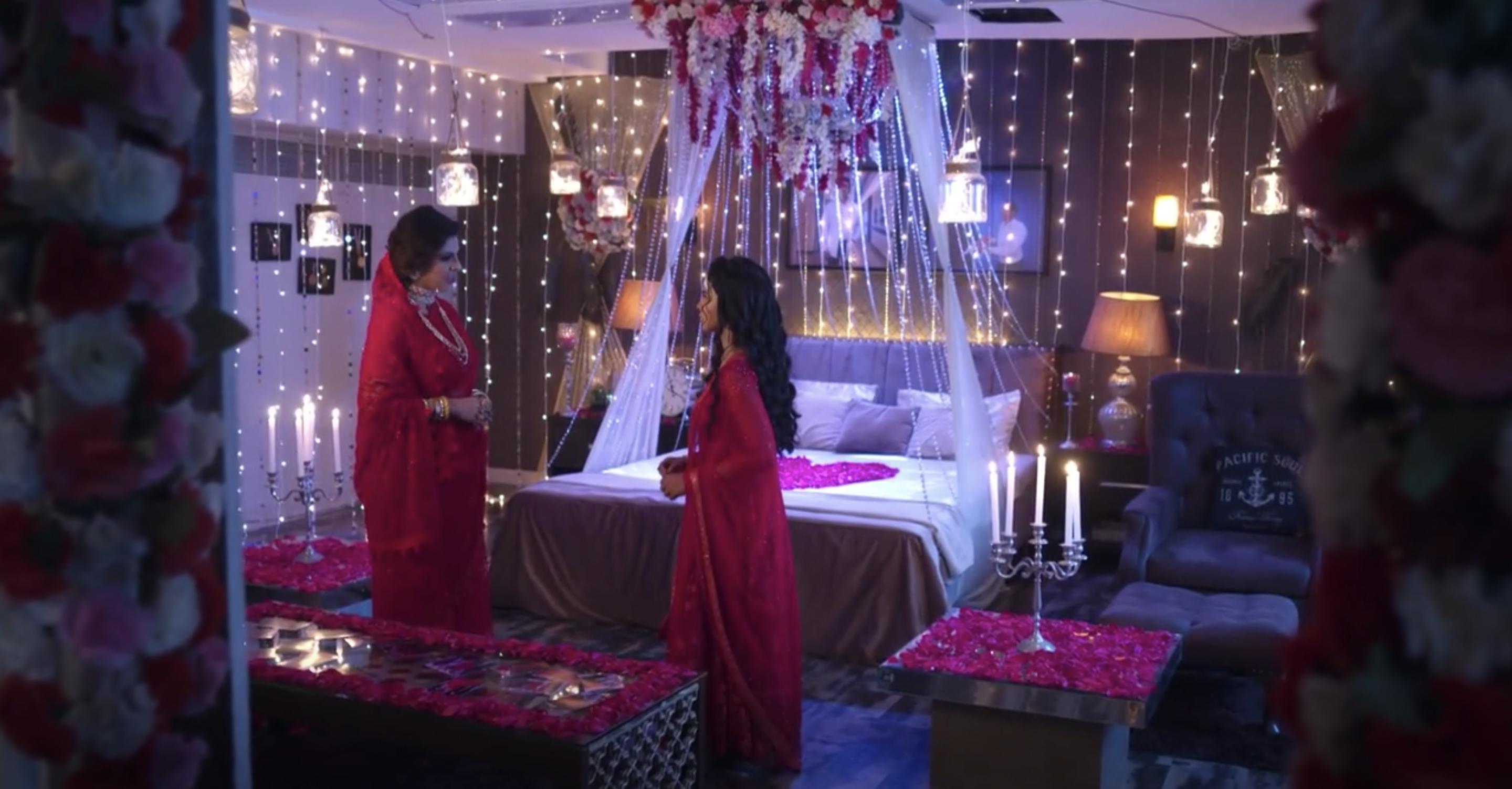