Let's discuss episodes here all. Please follow all the IF rules .

Like we did earlier let's appreciate each other's opinions and let's have a healthy discussions.

Waiting for them to upload the episode

Rani told Veer she was hurt that he had to stand up for her. Veer has been cautious since then. Particularly, with Kiara's friend, he let Rani handle it and was proud to see her. Veer or Vikram could have shut them up in a second. But Veer let Rani fight her own battles but stayed nearby in case anything goes wrong.

Things are likely going to happen similarly moving forward. Something will happen at the party and Veer will initially let Rani deal with it. When the water gets above the head, only then will he step in (I hope he does). Because when he stepped in last time in the village, it hurt Rani's self respect. So it's all tied together, their conversation post Baliya, Veer letting her be independent and the drama coming up. What Ranisa is planning to do is going to break Rani. I am now worried for both Rani and Veer

When he reached for her hand the light there, I don't knw whether it's co incidence but felt like it's divine intervention again proving the right is happening. Blessings from the above.

The day after when she entered the mansion her father's hand slipped form her hand in the mansion. Symbolizing, his journey in her life ends there. Today in the same mansion Veer is holding her hand covering it with his  hand symbolizes that their journey starts here and he will always protect her and will never let it go.

"I told you so" look 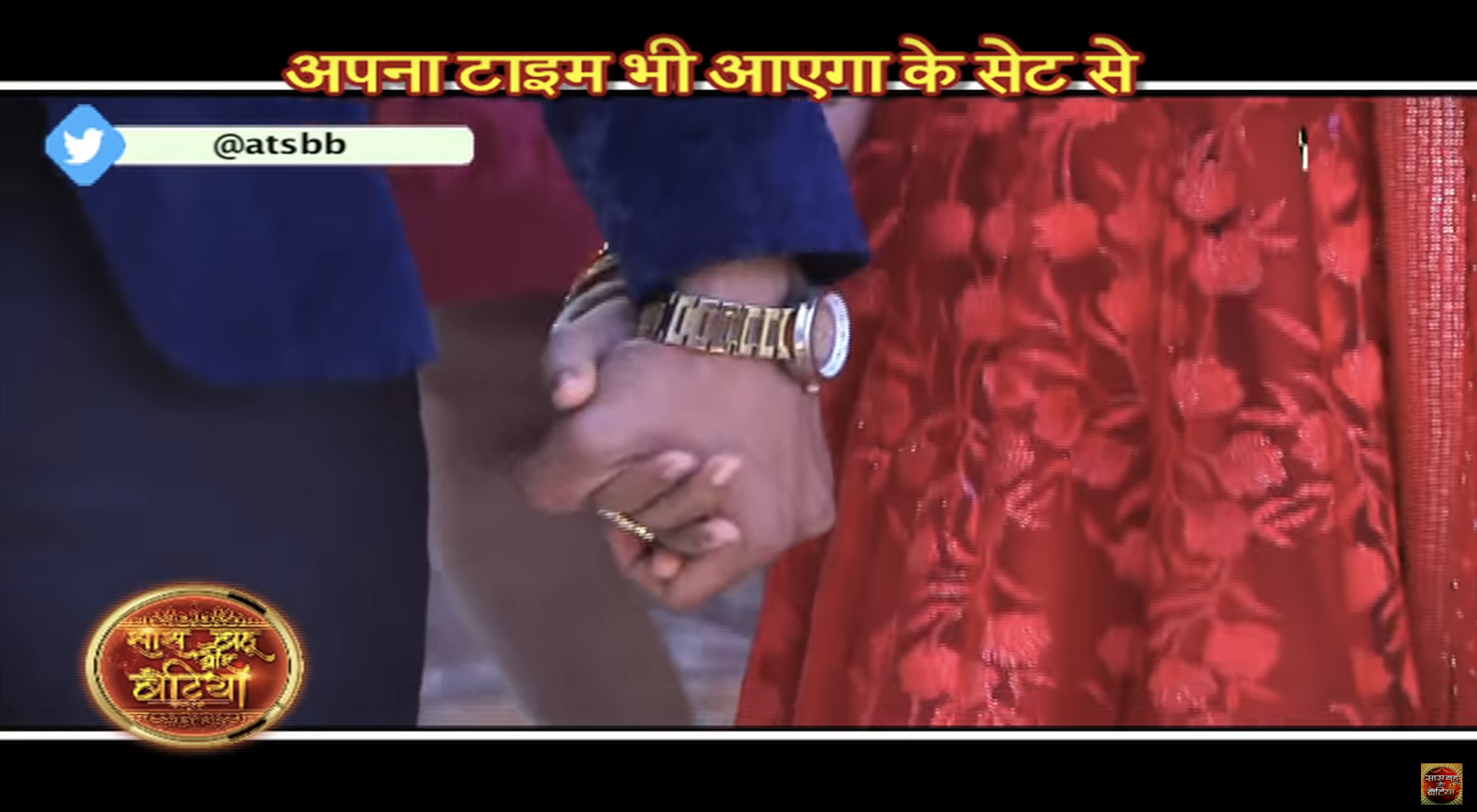 Angry mode, yipeee. Dare anyone say anything about his wife or him

I love how Veer has grown towards Rani. He is going to give us all diabetes if he keeps doing this.

Veer now knows Rani the best in that house. That Baliya trip really did them good. He got to see a different avatar of hers that no one else knows. I love how he respected her independence today. He knows how big it is for her. And hence, when Vikram went to stop Kiara and her friends from making fun of Rani, Veer stopped him. Vikram really went "but bro they are making fun of Bhabhisa. I will have to call this Bobby Barbie" (what kind of dialogue is this writers

) and Veer replied "Vikram relax. I have learned this much by living with Rani in the village. What she can do, we can't do. She will answer. But in her own way, just watch."

He is so smitten by her nature. That's the best kind of falling. Not looks or status or anything, he loves her for who she is. He was sooo proud of her reply

I am in the same boat as Veer, I love Rani!

She knows her way around. She really told Kiara + friends to be humble

She is like a sweet knife. She will say everything she wants but in a way which doesn't sound offensive. And Veer knows this

She said "my dad tells me that time also, like money, doesn't stay the same at the same place". I wonder if this is foreshadowing for what may happen to Veer. Will his status (and thus money) get stripped away from him after the truth comes out? Probably not. But this show revolves around how time changes for everyone. Let's see

Rani is in awe of Veer too. When Veer extended his hand to introduce her, Rani looked up to him and he comforted her with a nod before she put her hand in his hand. I love their eye conversations

Rani was so excited to play the game. But Veer's knowledge about Rani made them look like such a loving and understanding couple. "You all haven't seen her anger. I have seen it in Baliya. When she loses her mind, even Ma Durga shies away from her. It's scary."

Beta watch when that anger comes out on you someday

Don't do anything to make your Durga wife mad

Btw, Ranisa taking Rani's phone before the game will have something to it. She is not the type to do something like that without meaning.

He was impressed at his brother's knowledge of his bhabhisa

I love how he told Ranisa to let Veer do Rani's introduction. And then he told her to hold her hand soooo cutely "just hold her hand. Just hold it, I am telling you, hold it"

And Veer just followed his suggestion without any problem. Our Vikuuuu and lover boy Veeruuu

I mean why didn't she just look at the photos/documents in that room and put it back? Or why didn't she ask Kumud straight up? It was so weird to see her just taking away the documents. Pinkoo is better than her, at least he doesn't just take other people's things

Now those documents/photos are going to end up in the wrong hands. Whatever it is, it will eventually cause chaos for the Rajawats

When Rani said "Ranisa has gotten the house decorated so beautifully", Rajmata responded "beauty sometimes creates a misconception. That's why the secrets hidden behind doors are not visible." Rajmata is pretty shocked after she found out the adoption truth. Poor lady. Has to deal so much in old age

Jai showed up as a waiter

And Nandu recognized him through that beard

I loveeee how she gives Jai a hard time!! "I said yes to you because of my family members and now I am saying no also for them." Good for the CVs on showing her as a strong minded girl! Love it

Kiara and her friends are hilarious, for the wrong reasons. Firstly that Bobby dude did such horrible acting

Like whyyyy. And then no one was giving attention to Kiara and yet she always tries to get in the way. It's also silly how the guests start talking shit as soon as Kiara asked her question. What kind of people are these

Veeru will give it back to all of them, he looked so furious

Looking forward to Veer talking about their "complete relationship"

Please Tag the artists  Megha and Fahmaan too,

i-f has celebrity rankings too

do please Quote the review, symbolisms and echos in the same post on the first page of the thread

Half of the episode is up.

One bro is hyper,  Husband hyper cool telling she can handle the way we cannot handle

How she ends  Jai Mata Rani, do eat and go    hahahah

Half of the episode is up.

Veer is going to give us diabetes

Veer: In front of the world we may have many differences in our relation, but for us it is complete.

Kiara: The days are numbered now, when Baliya's Rani will become new Ranisa of Rajawats

RaniSa: Kiara, no one takes anyone's place, and by end of this function Rani will know where her actual place is.