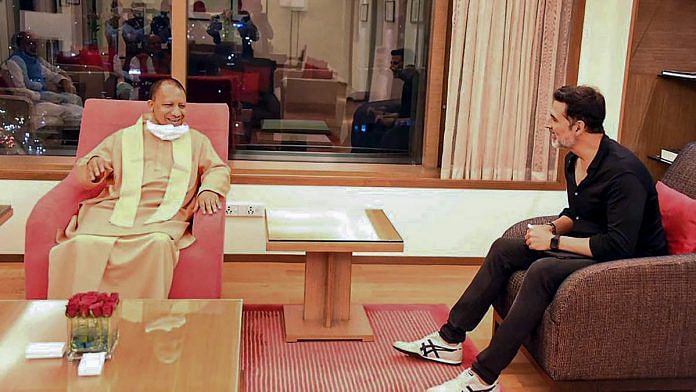 Yogi Adityanath, chief minister of the country’s most populous state, Uttar Pradesh, interacted with the business and Bollywood communities Wednesday, in a bid to attract investment to his state.

The CM later shared a picture from his interaction with the actor on his Twitter handle. He also shared that they discussed various aspects of the film industry with the ‘Kesari’ actor.

Sharing a picture from his interaction with Akshay, the UP CM tweeted in Hindi, “Met Indian film industry’s popular actor Akshay Kumar in Mumbai today. We discussed about various aspects of the film industry. His (Akshay’s) understanding, dedication and constructivism towards his work is inspiring for the youth.”

Maharashtra Home Minister Anil Deshmukh today said: "Over 100 years ago a film industry was established here. I don't think any other state could've provided the facilities that Mumbai has. We have better law and order. I am confident the film industry can't go elsewhere. Let him (UP Chief Minister) make efforts."

The Shiv Sena also hit out at the Uttar Pradesh Chief Minister stating that it is not easy to shift Mumbai's film city to another place.

"The film industry in south India is also big, there are film cities in West Bengal and Punjab too. Will Yogi Ji also visit these places and talk to directors/artists there or is he going to do so only in Mumbai?" Shiv Sena's Sanjay Raut said.

Maharashtra Cabinet minister and NCP leader Nawab Malik said that Bollywood can't be taken elsewhere and that the UP chief minister must have come to the maximum city, seeking investment.

"Mumbai is the economic capital of the country. Chief ministers come here and try to take some industry and investment for their states. Yogi Adityanath may also have come to Mumbai in this endeavour," Mr Malik said.

"He is speaking of making a film city in Uttar Pradesh. It's good as Bhojpuri has a very big market, but if anyone thinks that Bollywood can be taken elsewhere from Mumbai then they are confused. Even before this, Andhra Pradesh and other states started their own film city, but it did not diminish the importance of Bollywood in Mumbai," the minister added.

Yogi Adityanath today said: "We want to build a world-class film city in Uttar Pradesh. We held discussions with several producers, directors, actors and other experts related to the film industry in this regard."

Yogi wooing bollywood. He understands the power and influence it has over people, unlike some people who want to ignore all the bollywood movies as their favorite was not liked by them.

Yogi wooing bollywood. He understands the power and influence it has over people, unlike some people who want to ignore all the bollywood movies as their favorite was not liked by them.