Sushant honored for his career the California State Assembly

On the occasion of Independence Day, the California State Assembly recognised Sushant Singh Rajput for his contribution to cinema and the community . The certificate was received by the late actor's sister Shweta Singh Kirti. 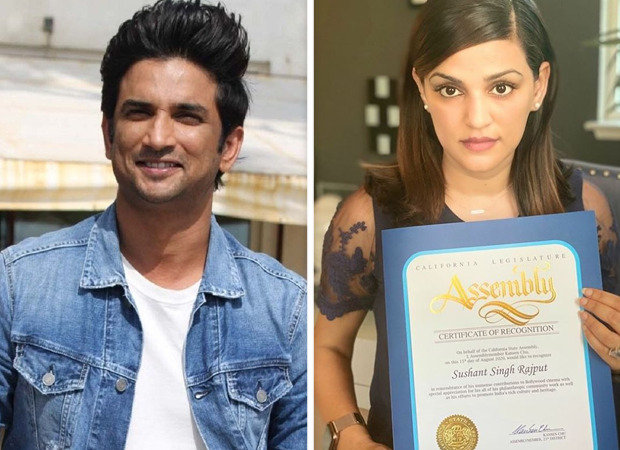 Shweta took to her Instagram handle to share a picture of herself posing with the certificate. "On the occasion of Indian Independence Day California recognizes my brother’s (Sushant) overall contribution to society. California is with us.... are you? Thanks for your support California," she wrote.

Sushant Singh Rajput was found hanging in his apartment in Mumbai on June 14. It has been two months since his death and several people have been demanding a fair investigation and justice in the case. On August 14, Sushant's family observed a 24-hour spiritual prayer. Shweta took to her social media handle and requested people to join the family in the Global prayers on August 15.

Sharing a quote from the Bhagavad Gita, Shweta wrote, “It has been 2 months you left us Bhai and we are still fighting to know the truth, to know what actually happened that day. I request you all to please join us for Global 24-hour spiritual and prayer observation for Sushant Singh Rajput, so that the truth prevails and we find justice for our beloved Sushant #GlobalPrayers4SSR #CBIForSSR #Warriors4SSR #justiceforSushantSinghRajput #godiswithus (sic)."

Edited by Maroonporsche - 6 months ago
3

1. All articles keep mentioning SSR was found hanging. Strong objection to that. Who found him hanging, not any of his family members, none of his friends, not even Police, only a guy says so, a guy who himself is a suspect now and has changed his versions n number of times.

2. Waiting for people to declare how this certificate can easily be bought and how it's only from CA where his sister lives anyways.

Thanks for sharing ! More power to the family. SSR's contribution to the community is truly memorable.

His PR was so passive, all the work he's done came out only after he was gone.

Money can’t buy everything in life. If that was the case, then all people in this world would willing pay any amount of money to doctors and ask them to revive people.. bring them back to life.

It’s nice to institutions abroad are honoring him after his death.