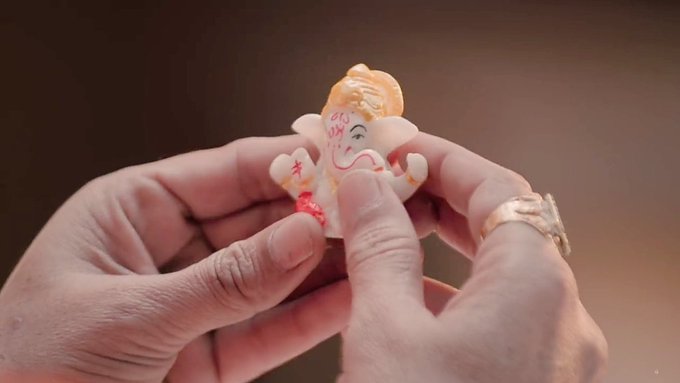 the episode begins with Mishti sitting before her dressing table n recollecting how she had joked with Abir over selling bangles . She had disguised as a bangle seller n Abir had pulled her leg over the badly rolled out roties ... badly shaped bangles .. and dreaming of runaway wedding /bhaag ke shaadi ,!!

Mishti in disguise had stated that it was her dream to have a bhaag ke shaadi .but Abir had refused n asked for huge dowry in exchange ,,and She had agreed to it .. she had joked that at her own wedding she will wear her mis shapen bangles n this will be the only dowry he will get .
Mishti is lost in thoughts when Varsha comes with new bangles for her to try out.. she finds Mishti looking very pretty in them ..asks her to get ready fast n come down quickly .

At the wedding venue BP n Nannu wait for every one to arrive .. soon the dhol beating starts ..two girls appear with Dhols dressed in Pinjabi looks .. BP and Shaurya start dancing on the song ... “ Poora London thumakada....”

BP n Shaurya begin with teasing their better halves .. then they pull them into dancing on the floor ..

Soon the entire Maheshwari family joins the dancing n clapping and Mishti is loving it . BP pulls Mishti to join the dancing too .. BP leaves her to Nannu and they both dance tog . Mishti watches her family dancing happily n feels guilty that all these days they were upset because of her n hence forth she will never give them any reason for unhappiness ..she could not bear to see them sad any more . Nannu offers Mishti a drink .. she accepts with thanks ....she assures Nannu that she will never betray him .

At the gates of MH Kunal n Abir are waiting ..they discuss how they were supported by their entire family except BB .. ..soon their accomplice Kuhu arrives with a bundle of clothes for them . Asking if they were ready for this attack ..Abir nods in affirmation but Kunal is scared of BP ..he states that earlier BP was like a yesteryear’s hero but now a days he was more like a villain !!
Kuhu retorts that he must be used to villains because his own mother was no less a villain .. she immediately regrets blurting  out this ,, but Abir assures it was OK ..they hide as Shaurya is heard calling Kuhu ...

Soon Shaurya comes looking for Kuhu n asks what she was doing at the gate . .. Ketu arrives right then n Shaurya asks her to welcome her Nanad inside . Kuhu Ketu hug fondly .

At jail Meenu has brought packed meal for Parul n thanks her for supporting her ..because of her being in jail, Abir will be forced  to marry the girl of BB’s choice n put an end to Mishti episode for ever . Parul is shocked to learn BB was using Parul to blackmail Abir n pleads him not to marry him against his wishes . BB says she Had to do this because Abir loved Parul more than BB .

At MH Kuhu hands head phones to every one informing the song will play directly into their head phones n Gujarati DJ will come for the sangeet dances .
soon Abir n Kunal arrive dressed in Guju costumes .. they beat the dhols n music starts playing “say na say na am ready to meet you ..”

all dance merrily .... Mishti trips n Abir appears from nowhere right on time to hold her ..he removes his shades n reveals to Mishti his real face ..she takes off her head phones n is shocked to see him there ,,she orders him to leave .. he asks her to give him 5 mins of hearing .... Or else he will reveal his presence to BP

Mishti pulls him aside .. but he threatens to go to BP ..she informs Nannu that she was going out for few mins ..

Finally MisBir meet at market .. she states she had cried n cried but no more ..she had moved on ..Abir pleads her to give him a patient hearing for the one last time .mishti says she had stopped listening to her heart as it gave her heart breaks ..she had started looking at reality n using her brains now . The reality was Abir had betrayed her n walks out on her .,..he had not  trusted her enough and that will never change ..she asks him to stop taking decisions from his heart . But to use his brains n move on .The reality was ... She was getting married to Nannu . She walks away teary eyed .

Meenu is waiting at RH where the bride n her family are waiting with the marriage registrar .. his marriage will pave way for Parul’s bail ..

Abir meets Nishant n pleads him not to marry Mishti .

Uru and other fans of two handsome hot man in the show...yeh dekho precap

Edited by Thimag1314 - 1 months ago
7 Likes this
REPLY QUOTE

suta thank you for the thread dear

abir makes her wear that bangle..

- varsha comes to mish room with bangles n they clash n bangles fall down n gets mixed n she makes mish wear all bangle including abir's too..

- mah family dancing on london thumakda.. after that kuhu goes out n gives costume to AbiNal... those two idiots were playing in the gate

- shaurya comes there and says to bring the person in kuhu gets shocked but as she turns around its ketu they go in n jas tanuts her saying everything is fine until you people dont interfere when she asks how everyone are..

- kuhu gives headphone to everyone... Kukubir dance i dont know the song... and then all 3 bring in mish and they all dance together.. very smart n confidant kukubir n shocked, scared mish...

- mish takes abir alone n asks him to go but he wants to talk for 5 minutes if not he will go infront of bp... and he goes out... mish informs nannu and goes behind abir..

- special mention to mishbir scene abir gives the headphone to mish saying nice kangan... and as mish dances with dupatta and throws it falls on abir, he takes it caresses it n nazar utaro for mish...

- Meenu meets parul in jail with food.. parul denies n requests her not to make abir do this. meenu says mishti is darkness in her life n all have left her side in darkness but tomorrow light will come... she says once abir gets married to my choice of girl he wont even think of another girl..

- mishti comes there abir says he is sorry as he made delay in coming.. mish says both are late.... abir says he just needs her help... he says he needs to do something but if he chose one other will be hurt.. once he did mistake he doesnt wanna do that again so asks her for advice...

- mish says whatever they were was past... everything between them were tede mede but whatever it was its in past... she wants to move on... he needs advice so tells whatever he does he does it for his own people n whatever she does is for the right thing... so stop thinking from heart..

- she returns the kangan... abir asks if she ever lost her strength, she remembers rajgarh time when she was kidnapped she says he was her strength not now... he makes her wear the bangle again n says this is to remind you that you never lose your himmat...

- mishti goes away.. abir self talk you are right as always mishti... this is not time to take decision in emotional state...

Precap - abir in the same hut setup when he talked with naanu... nishant comes there abir thanks him for coming.. nannu says he doesnt understand shayari n gol gol baate so asks him to say it straight... Abir asks him to back off from wedding..

Edited by LetThereBeLight - 1 months ago
11 Likes this
REPLY QUOTE

Yeah, it's funny that with Nannu, Mishti is being very open and truthful always. Informs him even for 2 minutes outings.

I guess she trusts Nannu way more to be open in that relationship.

With Abir, she was okay not informing him being out the whole day... be it KC or even their GD day!! Abir always believed her, trusted her...

But today, he didn't bother to clarify when Mishti told him that he didn't trust her.

Makers are pakaoing such a messy khichdi, and that too Birbal's khichdi... dheere dheere se. Let's see how it turns out on shaadi day.

Edited by SheThought - 1 months ago
2 Likes this
REPLY QUOTE