Tag line ...on hearing Rudra has sold himself MJ orders Amir to find out more details about him ...

Episode begins with ..... Maya in her room staring at the notes that Rudra had gives her as days earnings form selling fish ..she remembers that moment in the past when notes were thrown at her .. asking her to state her  price .. she was heart broken then ...

She throws the notes into a wooden trunk n locks it up .. 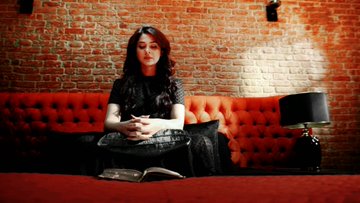 Rudra is practising fencing .. he gives a call from Ananya about going viral on TV n social media ....he asks her to cut the line ..

he starts practising when Maya interrupts n Angers him further .,he shouts at her ,, she recites Geeta shloka about losing one’s cool at the wrong time that worsened one situation ....Rudra accepts her challenge at fencing .. she easily wins the round ... n even disarms him .. he fumes with fury as she asks him to reach on time as she hated waiting .. he stares after her as she stops out ...

in his bed Rishi is waking up from dreamy sleep .. lost in Thoughts of Maya ... he goes back to sleep ....he calls her  but she cuts his call .,he feels insulted .. decides to visit her at home ...

Mair has fitted GPS devise on Rudra’s car n Amir is tracking him n following his every move ,,l Amir informs Rudra’s car was at Versova ..

Rudra arrives n at first gets stuck in mud n feels disgusted ... he then enters the building ..named “swarg Darshan “

He asks was he going to sell building material ?? Maya says they had to go up .. Rudra jokes he had lots of time remaining to go to heaven .. Maya says he had to go n reach before her .. Maya asks him to to be so sure ..

they decide to race it to the top floor

Maya uses the lift while he had to run up the steps ....

Rudra complains that this was not fair Rudra races up but has difficulty keeping up with that lift .. but in the end he reaches before Maya ,, he declares himself the winner .. maya started at him .. but soon the lift starts descending n Maya is thrown off balance ...

he rushes to rescue her l.he grabs her by her hand ...she is hanging by her hand but she detests a male hand holding hers .. she starts getting FBs of past molestation scenes ,,she tries to free her arm but he grips her hand tightly n pulls her up ,,he assures her he will not let her get harmed in any way ,,asks her to hold on ..not to let it go ..he rescues her ..she is stunned n in disbelief ,, Maya is shaken ..

Rudra taunts her . to be sure of the rules of her game or she will,end up injuring herself in her own game ... 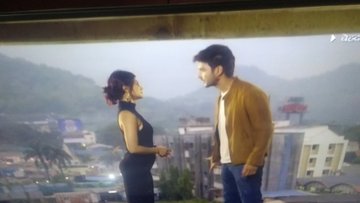 but soon Maya drops the facade n shows him the harness that she had attached to herself , n she was secured ,,Rudra is shocked ..he loses his cool n exclaims that he risked his own life to rescue her .. but she was faking it all the while !!  She was not bothered about his safety or his life at all !!.what did she wants from him !! He won or lost ,, he grabs her by her arms n shakes her ....Maya feels disgusted ..she gets FBs of her romance in the past ...n she gets infuriated ... she throws his hand away n warns him never again try to touch her without her permission ....,if he did she will ensure his hand would never be able to touch anything ever again .. she warns him .the thought of winning against Maya is the first sign of failure ..Rudra is shocked .. 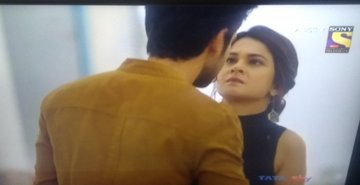 Maya’s informer removes the tracking device from Rudra’s car n crushes it .. he declares only those can get close to Maya home she permits ..

She walks away .. as she is getting into her car .. she gets a call informing her that she was being followed by MJ’s spy n he almost reached her .,Maya replies that almost reaching n reaching was vastly different .. she also informs her meeting n plan with Rudra turned out exactly as she expected ..

amir reaches the area  ... by following GPS but he fails to see Rudra .or his car .. . he wonders whose car was parked near by .. he looks around ...takes pics of the building ., he wonders if Rudra went back !! His phone was out of network .. the. GPS  signals is lost Amir returns back ....

As Maya reaches her building she realises Arushi was there to meet her she lights a cigarette n sets off the fire 🔥 alarms in the building .. Rishi is scared of the fire alarm going off ,,he drops the roses n rushes out ,, Maya’s mother n all residents of that apartment are seen rushing out  scared of fire .. Maya coolly stands there n watches Rishi rushing out with the crowd ,,

She is asked to run by her mother ,,Maya assures her mother all was under control as this was a false alarm .

In her room she writes her diary .. one had to put a person into trouble .. if he left everything n ran for his life he failed .. but if he stood there n cared for others he was the guy who could be trusted ..

maya mutters that Rudra had won the challenge today but this victory will lead him to his ultimate doom the next day .. he will,be finished .. she shuts her diary

Rishi proposes to Maya .. she accepts his proposal ..

Maya  offers sweets to her mother n assures her that she was so full of bitterness that until  everything burnt down she will not be relieved ....
Maya challenges Rudra to play a game that will last him4.44 seconds

Rudra asks if the number 444 had something Spl in them !!

How beautifully they depicted Maya’s psyche .. her fears ,,her trauma ..

Jen is incredible, every single episode is amazing. Did you notice even Shivin lost his balance in the fencing scene but Jen held her perfect poise. She was so powerful. Also, slowly but surely we can see Rudra getting intrigued/attracted to Maya's sanak. I loved that she didn't tell him not to touch her but to touch her with permission. Boyfriend ko to future me permission mil hi jaegi

Thanks Suta for the update

Jen is incredible, every single episode is amazing. Did you notice even Shivin lost his balance in the fencing scene but Jen held her perfect poise. She was so powerful. Also, slowly but surely we can see Rudra getting intrigued/attracted to Maya's sanak. I loved that she didn't tell him not to touch her but to touch her with permission. Boyfriend ko to future me permission mil hi jaegi

How wonderful to se you here ..

The story is very intriguing ... every one is falling into her trap so easily ,, she must have planned n chalked  out every detail..she must have studied the characters of the two brothers to be able pot handle the contrasting  characters so well

Sach me. MayRa shippers should order a 6month unlimited subscription of tissues

How wonderful to se you here ..

The story is very intriguing ... every one is falling into her trap so easily ,, she must have planned n chalked  out every detail..she must have studied the characters of the two brothers to be able pot handle the contrasting  characters so well

Absolutely. She has done thorough research of both of them. She even knew he was a state level champion. Thanks for the update Suta