The episode begins with Anu shocked to over hear that Pre was ditched by her husband who abandoned her n left ...he gets a call from So a whole he snubs by saying he would call her back soon ... Sona at Baj chucks the phone out of frustration that Anu refused to talk to her !! what the hell was going on between AnuPre ?? She goes berserk n violent ...she vouches henceforth Anu will give his attention only to Komo ..she will win every move of hers henceforth .. 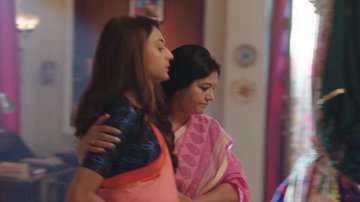 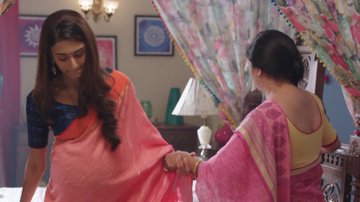 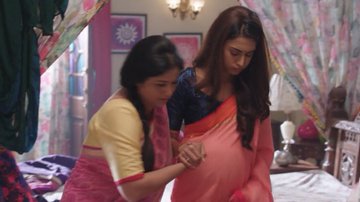 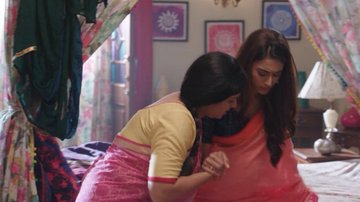 Anu then narrates how Komo got electric shock ..n Pre got a slight shock while trying to save Komo .. Vee invites Anu inside .. ..he calls up Sonalika  n apologises for leaving her alone ..he should have been with his wife .. he assures he would return soon .. Komo feels pleased but she wanted to make sure his brain had won over his heart because she wanted to win his heart not his head ...

At SN Anu helps Pre onto the bed ..he sits besides her .. he aPpreciates how she lied to Vee .. Pre says she did so that mother did not get stressed .. Anu adds that she lied to him too ..to avoid any stress to him!! Pre is taken aback ..Anu then asks why her room had no foto of her husband ?? Pre states she disliked Fotos hangin on the walls .. neither did Shivi .. with whom she shared this room .. 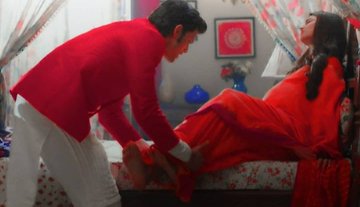 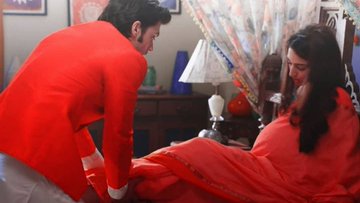 He asks about her hubby ..Pre states he was out of India ...he asks if he ever visited her ?? What was his name ?? Pre is confused what to reply ... she blurts out that she possessed no phone .. Anunoffers his phone ..as she must be excited to inform him how she heard the baby’s heart beats for the first time ..
Pre says she forgot his international number ..As Anu leaves he knows Pre was lying to him about her husband .. Pre wonders why he was so interested in her hubby suddenly ??Vee asks Pre not to visit BB henceforth .. she should now stop visiting BB .. none of Basus were interested in Pre ... Pre states she could not quit this job as she could not stay without meeting Anu every day ..Vee is taken aback with her reply 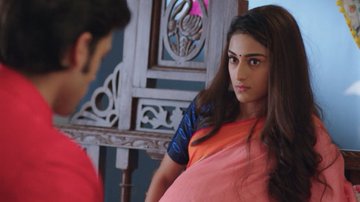 Anu reaches BB n all Basus are waiting for his return .. Komo rushes to hugs him ... but Anu feels awkward n does not return the hug .. Komo realises n makes an excuse ..Mol asks about Pre ... n Moh gets annoyed over this .. Mol Niv then inform Anu that his  suggested deal was thru n they had won international contract who would be paying in Dollars .. Anu is happy to hear this ...and Mol was going it thro a party for their colleagues n business partners .. Moh declares Anu was the pride of the family n Sona had brought blessings n good luck to this family .. Sona smiles sweetly

Anungets flashes of memories ....as he notices lipstick marks on his pink shirt ... he wonders why he saw prerna with him in all his memory flashes of the past ?? He discusses it with Sona ... he asks her if those lipstick marks were hers .. Sona lies that they were hers ... Anu then shares how he felt closeness to Pre n her baby .. how he saw her in his flashes of memory .. how he felt he was connected to Pre in his past ...  how her anklet reminded him of past scenes .. his moments with Pre in store room ... reading her resume about Switzerland...  and today seeing this mark on his shirt .. he got flashes of Pre .. he had asked every member but no o e was willing to talk about these flashes of memory.. all said they had nothing more to say !! Memories of Pre made him very awkward .. he was unable to behave normally with Sona too .. Komo then pretends to be understanding ..while fuming with jealous rage in her heart ..she suggests they spend time with eachother to know one another n develop closeness .. he should concentrate on his wife rather than his childhood friend Pre .. she understands he was concerned about her pregnancy .. she offers Anu her friendship ... Anu agrees Sona must be right ..

at SN Vee asks Pre to get over Anu but Pre is unable to live without Anu .. she is sure everything will be sorted out very fast ... Anu will remember everything ., also Anu needed to see Pre .. he too feels connected to her .. she asks Vee would she not do the same if She was in Pre’s position ?? Pre knows her reply ... that Vee would do exactly the same .....

Pre shares with Shivi how Anu was insisting on meeting her hubby ..asking her his name .. why this sudden interest in her hubby ?? Shivi jokes n pulls Pre’s legs ..

at BB Anu Sona are fast asleep on either side of cushion barrier between them.. Anu is dreaming of the hospital visit with Pre n he was feeling the baby kick ... he wakes up from his dream ... he happily shares his dream with Sona .. how he heard Pre’s baby’s heart beats n he felt as if those happened beats were his own .. Sona is shocked 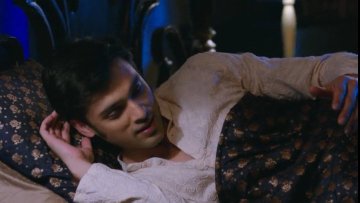 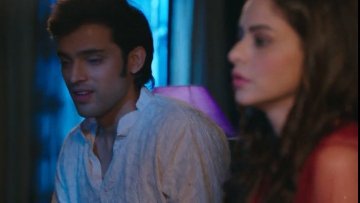 Anu goes to SN to invite them for the party at BB ... he invites Pre n her hubby too .vee gets annoyed n wants to tell Anu that Pre’s hubby was none other than Anu himself .. VeeShi are taken aback as Anu over hears them ..,henis shocked too ...

Edited by Arshig8 - 8 months ago
1 Likes this

Harwaqt cutiepie and prerna jaap infront of my sona

I'm sure Anurag wouldn't have heard that he is Prernas husband

Is the precap a  dream of prerna

Why do I feel so

Cutiepie is surely risked.....I hate anurag for discussing  everything with sona

She is slowly winning his confidence

Breaking
Breaking After shooting from home, Aamna Shariff back on the sets of Kasautii ...