Abir executes a plan to make Mehul  confess while police arrive with an arrest warrant for the latter .. Mehul does unimaginable

the episode begins with Mishti getting the premonition of something bad was about to happen .. she gets a phone call from Jugnu informing Abir has left RH along with Mehul in fit of fury ..never to return ... Nanu also talks to  Mishti that Abir had left RH .. pleads Mishti to do something .. he can live separately ..Naanu was willing to do their grihapravesh at their new home .. but if he breaks rishtaa then this family will break up .. pleads Mishti to do something to get him back ..Mishti assures Naanu she will not only talk to him .. she will get him back never to leave the family ever again ..She promises Naanu ... Kuhu come n  asks Mishti if Meenu was right ? Had Abir left home ?? Mishti requests Kuhu to track Abir’s location n keep Mishti posted ..

Abir is driving his jeep n Mehul is sitting with him pondering if Abir does not return to his family it made no difference but if he did  it seek property then  Mehul will remain empty handed .. he decides to brainwash Abir .. Abir is driving rashly ... Mehul screams with fear ... he starts brainwashing him.. asking him to stop being angry ... be friends with anger .. Mehul reminds him of Mishti ,, Abir says mother disbelieved them.,she was always accusing Mehul of trying to usurp her property .. she always showed them legal documents ,,now Abir n  ehil will go straight to lawyer at court n document it on legal paper that they wanted Not a single penny of hers ,, they will chuck that document at Meenu’s face .. Mehul screams both at Abir’s words n at his rash driving ..

Abir pulls out his mobile n starts calling the lawyer ... Mehul thunks Abir was Bewakoof maa ka bewakoof beta ..he will spoil al,his well laid out plans !! He screams at Abir to drive slowly ,,not to use mobile while driving n not to talk to lawyer .. he shouts at Abir n orders him to stop the jeep ... he shouts at him not to put Mehul’s life at risk ..he didnt want to die !! Abir could die if he so wished !! Abir is shocked at this outburst from Mehul .

Abir then vents out his fury against his mother ..how she accused his baba of being after her money .,her property ..he was greedy ..they will show her that she was wrong ..they needed nothing from her !! That father son love could Not be bought by her money !!

mehul then declares that everything could be bought ..he wanted everything that Abir had just left behind .. he wanted all that money n property ... he had rights on all that money n property.. he calls Abir stupid boy .. Abir is shocked .. he agrees that he was very stupid .. entire family Kept telling him Mehul was a wrong guy but he refused to believe them .... he was so stupid he believed only Mehul .. he was so stupid to believe his baba loved him n would return for him .. finally Ganapati baba answered his prayers n brought back his baba and also baba’s real face was revealed to him ... he just saw the real Mehul Kapadia ..

Mehul then tries to put the blame on Meenu ..Abir shouts at him n orders him to stop talking anything about his mother .. or uttering her name ... he admits he knew his baba’s real face long time back but he himself wanted to see how low he could stoop ..

Abir  then tells him that on KC it was not his mother but Mishti at RG.. Mehul,is taken aback .. he then tries to frame Meenu for the scams against him ...but Abir retorts that his mother had no cue that Abir’s name was going to be  changed  into Abir Kapadia it was solely Mehul’s plans ... but now Mehul was totally exposed .. all Mehul’s plans were exposed .. his real face was revealed ...

Mishit reaches that spot n calls out to Abir .. Mehul sees her n  curses her for spilling all his plans . he is about to attack her but Abir comes in the way n prevents him .. he tries to free himself n lunges at Mishti but Abir stops him . mishti urges him not to fight his baba .. abir tells baba that today he raised his voice at Mishti ... Abir was restrained by Mishti’s voice .. but if he ever again raised his had at Mishti nothing will stop him ... Abir Mehul angry eyelock .. angry confrontation .. 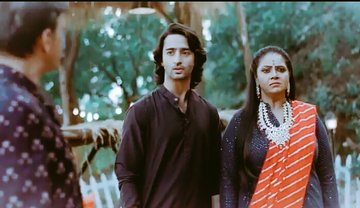 police glares at Mehul  n Abir ...right then Meenu arrives n stops police ... Mehul n MisBir are stunned to see Meenu .. Meenu declares there was no person named Abir Kapadia .. she shows police the legal document supporting her claim .. Abir tells Mehul that his name was Abir Meenakshi Rajwansh n will remain that way .. Meenu gets motion at hearing this ..

Mehul warns Mishti that this was the first chapter of his story .lhe would return soon for the next one he challenges Mishti ,, he glares at her while police whisk him away into the waiting van

Abir feels heart broken .... he remembers childhood moments when he was pleading his baba not to leave them .. when he had fought with Meenu n Parul over his baba n left home .. he gets teary eyed n regrets .. Meenu walks up to him n consoles him lovingly .. Mishti watches mother n son from afar .. Meenu assures she will be with him always .. she hugs him .. Mishti thinks Anir needed his mother the most today ..

abir walks away n thinks of a sad shayari he had lost his childhood n now his childhood happy memories too .. wades into the nearby lake .. he recollects the moment he n Mishit had rescued Mehul from drowning .. Meenu shouts at him to get back ... she understands his heart break ... Meenu regrets not sharing the truth about his baba with them earlier but she didn’t want to hurt already heart broken children .. Abir apologises for not believing her earlier ..she was being a good mother ....she was very strong unlike the crores of mothers  ... he will be a good son to her hence forth .... he will become that son that she deserved ... 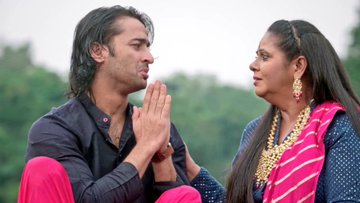 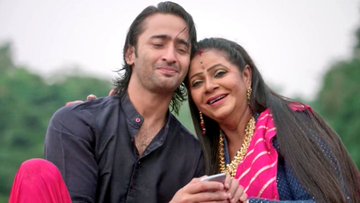 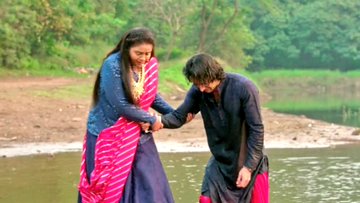 Mishit feels she understood what Abir was going through ..for she too had gone thru the same pain herself .. MisBir were cursed with the worst fathers in the worlds .. at least Abir n his mom’s MU was cleared ... she is happy Mehul was out of  Abir’s life ...

at RH Kaushal declares that Mehul had been thrown out of their lives ... but that guy will surely never be able to harm them ever again .. Parul.. Nidhi ..Jugnu ..Naanu are see feeling so relieved ..Parul thanks the lord ... Nidhi goes to light the diya at Mandir...

Parul praises Kaushal for doing this great deed .. he was the best brother that Meenu could have ... now Abir needed his support like never before ..

Kunal regrets he could never support his Abir like a brother that he needed .. Naanu consoles n calms upset Kunal ..

Kunal is upset the he failed to handle things during emergency .. nanu hugs n consoles Kunal .. Kunal asks Kaushal that he was the best younger bro in the world .kunal too wanted yet be like him lhe wanted Kaushal to show him how to become a good younger bro ..Kaushal calms n so soles upset Kunal ..

Kunal tells Naanu that Ahir had always fulfilled the duties of elder bro while he had failed him as his younger bro ..he laments .. he weeps he had lots of growing up to do ,,he promises he will be that younger bro that bhaiya deserved ..he hugs Naanu

Meenu tells Kunal that she had one problem with Mishti .,.. Mishti has become a part of her sons life
misbir...KuKu... Jasmeet ...Jugnu...Naanu ..are seen dancing tog on a peppy number ..”peheli baar muhobbat ki hai ..”

jugnu calls mishti and says about abir going away with mehul.. nanu takes the phone n says to her he will organize a house warming party for their new house  if he doesnt wanna live with them... but if he goes in such anger family will be shattered..

mishti promises to bring him back n he will never leave them... kuhu comes there as nidhi called her... mish asks her to track abir using his app n goes in search of him..

mehul thinks abir left everything for him.. if he doesnt ask for his share of property he wont get anything.. and he needs to manipulate him..

Thanks Suta for the thread!

Waiting for the updates

Thanks Diya for the Live updates

Not sure when I will get to watch the episode today!!

Edited by SheThought - 8 months ago
4 Likes this

I am extremely grateful to Mr. Rajan Shahi: Avinash Mishra on joining ...