Being religious has become synonymous with being intolerant: Vidya Balan

Vidya Balan opens up about why she feels people all over the world misinterpret religion. 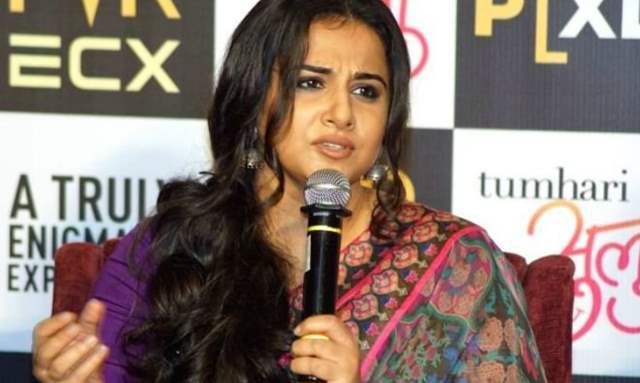 In a recent interview with PTI (Press Trust of India), the actress opened up about how a person can have multiple identities but, there is a problem in the way being religious is interpreted today. She also stated that science and religion can co-exist rather than being pitted against each other.

"I think there is a problem with the way religion is being interpreted today. I know a lot of people who are shying away from calling themselves religious and I am one of them. I have always felt like I don't want to say I'm religious. I always call myself spiritual," the 40-year-old actor told PTI in an interview.

Vidya added that Tara Shinde, her character in the film, believes in a power beyond science, "Religious has become or obtained a negative connotation because being religious has become synonymous with being intolerant. But they don't have to be divorced."

"Not just in our country but world over, it is becoming you v/s me. That feeling of us has been diluted lately. I wonder why though? Does it have to do with fewer resources or access to fewer resources and therefore wanting to hold it and then finding groups to align it with religion or some language or region or race or something like that...? I don't know," the actor further added.

"We need to question ourselves over how open minded we are. This is also a world, where freedom, I think means that I want to be free but I want to control you. That, to me, is not freedom... Everyone is screaming out loud. There are some blatant wrong things that are angering but look at what happens on Twitter. Everyone is taking offence to what is being said."

Vidya said her character brings her own set of tricks as a homemaker in the professional space and she relied on director Jagan Shakti’s research to play the part right.

"I spoke to director Jagan Shakti's sister, who works in ISRO. For me, it was important to understand how she strikes a balance between being a scientist, an extremely demanding job, and at the same time being a homemaker. Jagan met hundreds of scientists and I think he got all the requisite information about the mission. And then R. Balki, Jagan and the team interpreted the theory the mission was based on," said the Begum Jaan actress.

one of my fav, Vidya! Always so articulate..thoughtful and genuine

I agree with her. Go on Twitter and just post I'm a proud Hindu, all hell will break loose. People would come with blazing guns on you calling you intolerant or a bhakt.

The funny thing is calling your Hindu has become synonymous with a pro BJP, even when the person in picture might not be into politics which is even more hilarious.

I agree with her. Go on Twitter and just post I'm a proud Hindu, all hell will break loose. People would come with blazing guns on you calling you intolerant or a bhakt.

The funny thing is calling your Hindu has become synonymous with a pro BJP, even when the person in picture might not be into politics which is even more hilarious.

and also if one goes on twitter and says Allah-hu-Akbar..he be called a terrorist immediately..

and also if one goes on twitter and says Allah-hu-Akbar..he be called a terrorist immediately..

Apt. Being a Muslim you need to wear your national flag to show you are a DESH BHAKT and Being a Hindu means automatically Ppl tends to think you aren't of secular mind or you have to be a BJP supporter. Just cuz of few politicians and social media trolls we are in such a position.

Not sure about intolerant but delusional definitely. Science and religion can coexist? Yeah sure they can but they shouldn't, atleast in the current form.  But then we have a biggest anti-science industries like homeopathy running in parallel with modern medicine, the biggest proof that human stupidity of beliefs knows no bound. But homeopathy atleast succeeds with placebo in some cases, success rate of prayers is close to zero probably.

Vidya has a sexy personality and charisma that transcend her looks. She is my ultimate girl crush. She is smart and confident in an unassuming way, she is sassy without being in your face, and has a great sense of humour and self.

I am OK with people stanning whatever they want as long as they don't force their views on others. You love Star Trek. OK. But don't tell me Star Trek is superior to Star Wars or look down on Star Wars fans.

But don't lose heart, we can both get together and bully the Twilight stans.