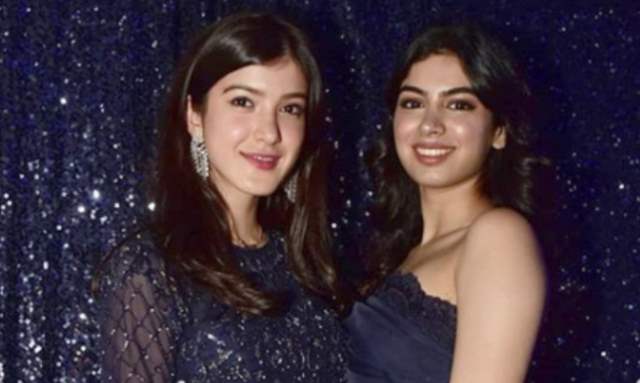 Boney Kapoor and daughter Khushi Kapoor are currently in Bali to attend late Sridevi’s friend, Raakhee Punjabi’s son's wedding. The father-daughter duo is accompanied by cousin Shanaya and her parents, Maheep Kapoor and Sanjay Kapoor. The Kapoor clan seems to be having a gala time at the luxury wedding as many pictures of the kith and kin have been doing the rounds on the web.  But, what grabbed our eyeballs is the alluring twinning of young divas, Khushi and Shanaya.

The budding Kapoor starlets looked glamorous all dolled up in beautiful outfits for the wedding. Khushi twinned with her cousin Shanaya Kapoor in a deep blue outfit, and we are awestruck whether this co-incidence was actually planned!

While Khushi was dressed in an off-shoulder top and colorful lehenga, Shanaya’s lehenga was embellished with sequins. However, Janhvi Kapoor could not attend the wedding as she is currently shooting for her Gunjan Saxena biopic, Kargil Girl.

Check out some of the pictures of the Kapoor family from the Bali wedding below:

Sanaya Kapoor is not herione material at all, unless she turns out to be good actress.

Sonam is the prettiest kapoor<3

Kushi can be a model, with that height n body, she is not pretty n shanaya I like her bt she looks weird.