Opening her eyes and rubbing them and Mahi jumped up with a start. She gasped and panicked, taking her surroundings for woods gradually. She paced up and down the path once or twice and called out in her shrill yet childish voice that echoed, aided by the seclusion.

"Mom! Dad! " She shouted so loudly that her throat began to hurt.

All the exertion however, helped her see things more objectively.

"What the hell are you doing here, Mahi?" She asked herself, scratching her head.

With the thirst for thrill and want for exploration, running all through her, she at last decided to pick herself up and look around, gather scenic beauty to write on and find her way out.

Walking down the trails and under the shady trees, she heard someone sobbing. She decided she would follow her instincts and go after that voice for that would if not anything else, definitely give her a destination to reach up to. Blindly relying on the voice for directions, she soon found herself near a marshland and a little girl with red hair weeping.

"What happened, sweetie?" She knelt down to have a closer look at the girl.

"My ball!" The girl cried, pointing towards one of the trees. And Mahi spotted a ball stuck in the branches.

"Aww, don't worry, i'll get it for you!" She exclaimed lovingly.

She grabbed a fallen branch and headed towards the tree. Shaking those widespread and weirdly positioned branches brought the ball down.

"Here you are, little redhead!" She laughed cheerfully and turned but what she saw had her shocked and her mouth wide open.

In place of the girl stood a fairy with huge butterfly-like wings and a magic wand, smiling gently at her.

"Young lady, i am pleased and i want to give you something!" She majestically and authoritatively said as she waved her wand.

And before she had known, a glittering, vibrantly and vividly colored plethora of dust engulfed her.

"Pixie dust!!! " She thought to herself wondrously. She was now in the midst of the most enticing thing about all those fairy tales she had read as a kid. The very next moment, her old pajamas she had got up with were transformed into a shimmery, long and wavy purple gown, probably the prettiest dress she had ever seen.

"Fairy... " She tried to say something but the fairy admonished it.

"No time for chatter, you're late my girl! " She said in a worried tone. She waved her wand again and neighing magnificently came a spotlessly white horse, speeding out of nowhere.

"Come on, be quick, get onto the horse! " She ordered and Mahi obeyed "He will take you to the ball! "

"A ball? But i can't. .. " She tried speaking up again only to be silenced again.

It so seemed that the horse was soon riding on the wind and she waved to the kind fairy as the horse headed eastwards. With the bracing wing soothing her olfactory senses and the speed her adventurous desires, she felt she was on the top of the world and fetish round her not being able to dance disappeared into the thin air.

A while later, a huge heavenly palace brought the horse to a halt. Mahi got down at once, gazing unblinkingly at the tall towers that were touching the skies. Dusk had fallen and a million little lamps decorated the castle with cumbersome light and beauty. Picking up the train of her dress, she ran right in across the gates and corridors and stopped only when she entered a humongous hall. She saw couples dancing, lost in each other's love and was looking on admiringly when she felt a tuck at her hand.

"Oh beautiful lady, would you like to dance with me? " Asked a young man whose attire was suggestive of his royal descent.

"Never mind, i will teach you!" Said the prince and she conceded not only because he looked lonely but also because that chivalry and those dreamy, charming eyes had her dazed.

"Oh, how handsome and gallant is he!" Her heart said "Like those princes of all the stories my grandmother relates!" He took her hand and lead her to the dance floor.

"1, 2..." He said, wrapping an arm around her and the other holding her hand and moving leftwards twice.

"5,6,7,8" He said as she held his finger and effortlessly twirled and danced, like wool spun into yarn.

They continued dancing as a romantic tune was played, with all eyes on them and she forgetting herself while dancing with him.

"Mahisheee!" She felt a voice almost deafening her.

"It was certainly not my prince's voice; oh he has such an alluring baritone voice." She was just framing herself when she heard it again.

"Mahi, girl you're late for college!" Said her caring mother but it seemed distracting to her.

"Oh god!" She got up yet again abruptly, smiling at the memory of the dream that stayed with her as she started preparing for the day that happened to be her birthday.

ColorDreams
Many many happy returns of the day dear
May god bless you.
Stay healthy happy and successful

Wish you many more happy returns of the day Mahi.

You are an amazing friend and a very talented person. We have not talked much, but you come across as a cheerful personality. You are always up for anything and everything. On this day, I wish for you to grow into a successful person and experience a life that's worth all hardships.
Cheers,
Arthy.

May you have all the joy your heart can hold,
All the smiles a day can bring,

All the blessings a life can unfold,
May you have Gods best in everything.

Wishing u a Happy Birthday!!!

Smiles and laughter, joy and cheer
New happiness that stays throughout the year
Hope your birthday brings all these and more
Filling life with surprise and joys galore 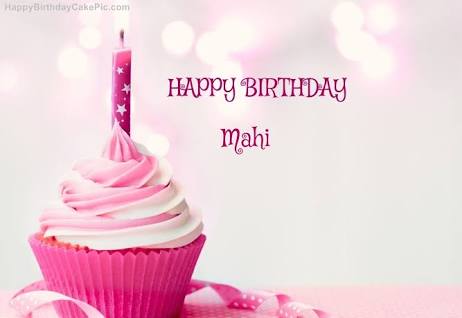 _Meena_
Happy birthday, choti! I hope you have an amazing birthday! Where do we even begin? Two years of amazing friendship turned into a great bond! Despite time differences, our chats are hilarious and awesome. From RP to CC to Mytho to Facebook etc, our never ending love for purple color is unlimited. Ok, I'll stop this banter now and will get to the point, LOL. I hope your birthday is filled with awesomeness and may your wishes come true. Happy birthday my favorite to my favorite gujju chokri. :p
-Meena
Radhikerani
That's from me! 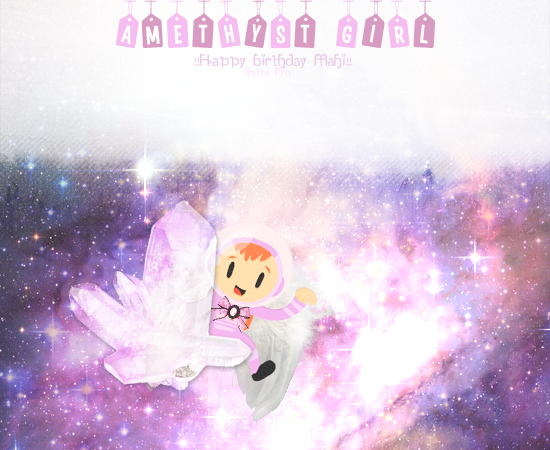 Edited by KrishnaPriyaa - 2 years ago
9 Likes this

--Epithymia--
This special day of a special person calls out for a special celebration!

Thanks Di for always being such a dotting sister, an amazing friend and a wonderful guide! There are so many important things that I've learnt from you. People like you are difficult to find. Only few are there who climb the stairs of success with the incredible mixture of kindness, generosity and affection in their heart; and you are one of them.

Wishing you a pot of gold and all the joy your heart can hold. A very happy birthday Di!

Riya_16
Wishing you a very happy birthday, Mahi. I hope that this year your birthday brings along with it a whole lot of happiness and success...stay blessed.

Shrinika13
Hi Mahi!! Wish you the bestest of all, have an amazing day. Todi nakh aaje! Stay amazinggg, and much love from me, chokri!!! Hope we will have loads more to talk about soon, as we haven't had time of late! <3 Hugs and kisses, and loads and loads of best wishes! Here is a chhota sa tohfa from my side! 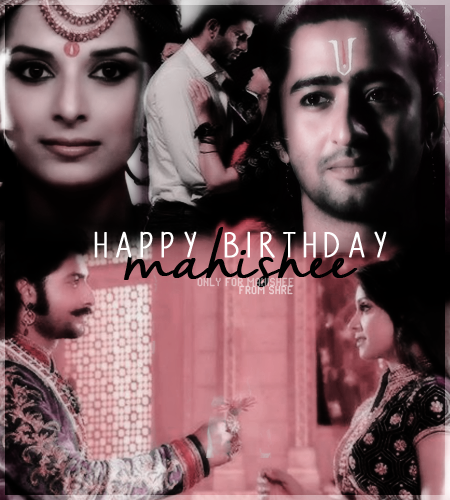 Do you expect essays on you today? You should :P See, there are enough people who have known you that closely to tell you about your own self. In all this chaos, my wish for you is very simple. Just be happy! Be yourself! For what I've known of you, I have always regarded you as a person whose presence is loved by everybody. Your ramblings from the CC are missed, fellow PCM-mate. Hope you are doing and will do all things great and good in life. Be the lively soul you are! All love to you...! Happy Birthday Mahi!

--Elara--
So yeah, utter loss of words. I've got so much to say yet nothing whatsoever cause you know just what i want to say. Sweetheart, here goes the usual 'ghisa-pita' dialogue, what would i have done without you? I've got someone who's my soul sister, someone who has been one of the bestest friends ever and yes, the best sister in the whole, wide, wayward world.
To that sister, from the bottom of my heart here goes a little something which is not worth her time. (But i guess it's okay, nevertheless. I couldn't get much ready so you can ask for a poem or two later and it will be done :P)
https://s26.postimg.org/uibxbj8kp/gift.gif
Wishing you an ecstatic 18! May those dreams you have in your eyes chase you instead of you chasing them for you deserve that and more!
Yours Always and Forever,
Ramya Di
Edited by Shrinika13 - 2 years ago
11 Likes this

Happy wala Birthday Mahi , have a great one

Happy birthday Mahi! One of the sweetest person on this IF planet! May your year be filled with laughter and joy and may you make beautiful memories.
Ps gorgeous thread guys!
2 Likes this

Happy birthday  Mahi. Have a beautiful year ahead