How's bout this one
A cute couple, girl with short hairs , both seems to be in love and a CAT at the window to complete the picture 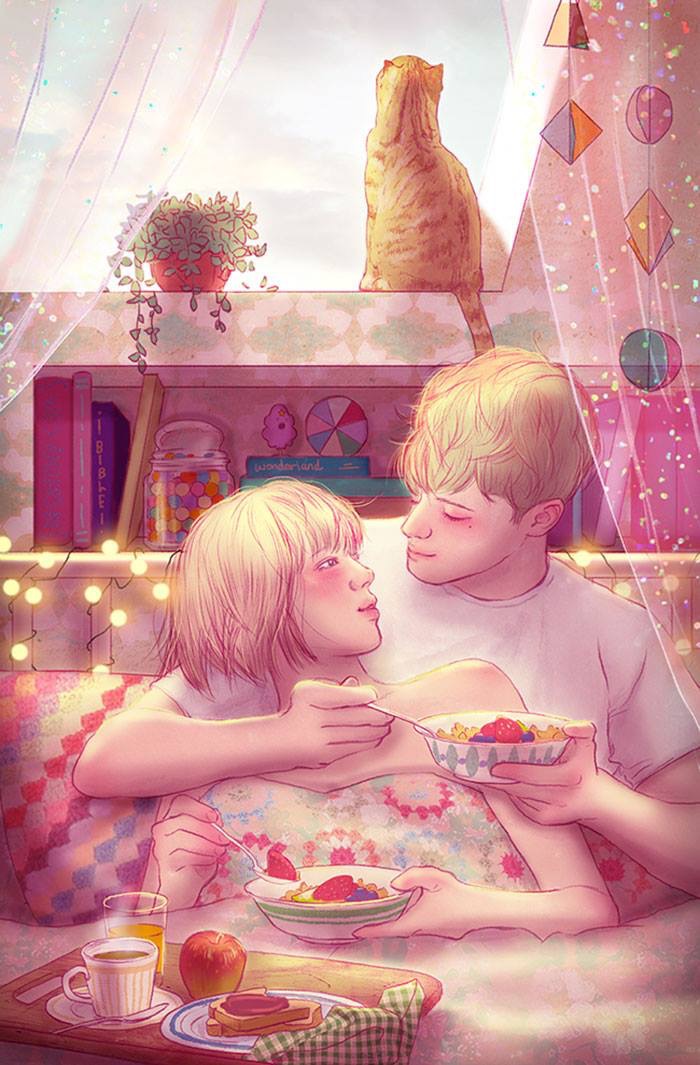 . This could go as the book cover. MJ is also dang cute by the window sill( meowing at the birds... ha ha)So damn adorable. Acchoo so cute sonal.
Nisha, sonal is burning midnight oil now to get all these and its past 2'Oclock for her .
Golu padi apparama set pannu please.

No worries Kalpana as my younger one is still awake

My hubby leaves for a business trip in the morning at 7 and my elder one goes to school at 6:30
So I m thinking should I sleep or not

Kalpana eppadi ellam kettu paarkarom illa? When it comes to updates we become like kids and are insatiable. Edited by moonwearer - 4 years ago
5
REPLY QUOTE

Get some sleep folks!!

I'll be the cat sitter today

Trauma & Tattoo
"she looks so innocent" Leela said candidly, a brief look of meloncholy swept over her features
"Hum aapko keh rahe hain aap sunte nahi" Mandira looked sad
Ashvin was typing on his laptop
It was close to 7, he was home early, Chirag had followed him home hoping to catch Trisha,
but she was not home. Ashvin refused to text her (he got her number after kissing her in the morning)
He spun it as "If you need me to kill spiders I need your number"
"I am not going to wait no?" she asked
"No?" he teased
"What if it goes fast?" she asked innocently
"Umm.. u shud cap it with a cup"
"then I will have to go near no" she said innocently
"U are right... but if I am in the vicinity then we can do a good job of rescuing you" he said ina  whisper
"You sound like some brave fighter" she giggled
"Fighters wear glasses too" he said
She smiled and asked him for his number so she could call him from her new cell phone number.
"i dont want you to deliberately infest the house with bugs to test me" he whispered on her cheek
"what's infest?"
"Look it up" he said kissing her again
His mother had thankfully not appeared after admonishing her DIL for being dramatic
Chirag had moped for an hour, argued with leela, eaten dinner his Mom had cooked and took off
"She is from a  small town" Leela justified Trisha's innocence
"You can be too... could be too" mandira assured her daughter as they sat in deck chairs in the humungous balcony
She lamented her daughter's loss of innocence... sexual innocence... she was saddened by the experience her daughter had gotten
There was no need for it in her opinion
Trisha's eyes still had that innocence
Leela was naive too but she was afraid to be lonely she constantly sought partners
Leela shook her head sadly
"i dont want you to find a boy friend the moment you break up" Mandira tried to push her agenda quickly
"What should I do? just watch my friends have boyfriends?" Leela bristled
"Listen... baat suno" Mandira argued

"Do you guys ever wonder how life would have been if Daddy was around?" Leela asked through a constricted throat
Mandira didnt answer she looked out the balcony
Ashvin pretended to be busy
"I dont think he would even be in Bangalore. I dont think you will abandon me every other month to check on him. Even if u did I wud have Daddy by me. I would be like Chachu's kids" Leela said with a forlorn look on her face
"they all love you" Mandira said firmly, not letting any negative thots creep into her mind
"But they are not my Daddy" Leela said tearfully
"So that doesnt mean you need a boyfriend either" Mandira stressed
"Mom... let her be"
"ashvin... she doesnt tell you, she had two boy friends and broke up with both"
"Oh yeah Mom.. tell HIM... he acts like he was raised by a gang of bikers" Leela was merciless
Ashvin chuckled amused
"how would you know?"
"I mean... only they go on 1000 km bike vacations.. only they ride without a helmet, like you moron" leela shouted
"Leela" Mandira sighed
"He married a girl dumped her and is now living with her again. I am supposed to be like him?"

"thats right" Ashvin was not offended at all
"Stay with him" Mandira begged
"I would jump into a volcano first" Leela said applying lip gloss furiously
"Ouch... dont say that to Trisha" Ashvin chuckled
"I forgot I DO LIKE HER... Poor girl... her life is ruined... BAS... ho gaya"

"You like her?" mandira was shocked
"she is sweet. She loves cats, and has pretty skirts" Leela said naively
"And NO tattoos" Ashvin winked
"I GOT A TATTOO BECAUSE I THINK OF DAD" Leela was hurt
Ashvin went all somber
Mandira looked shattered
Leela had the word Dad in Greek tattooed on her right arm.
"thats not the bad one" Ashvin said quietly
"i dont need your opinion OK?" leela was hurt
"Dont date guys that have more tattoos than skin" he said sternly
"I HATE HIM Mom" she said shrilly
"Ashvinnn" Mandira scolded
"What? I am just sayin"
"Dont be bossy"
"shes a kid" he said
"I AM NOT... i dont need his advice." Leela said primly
"Use caution beta" Mandira said softly
"I dont date any man" Leela was hurt
"I know" she hugged Leela
"Do you want to go Timezone ? (video game arcade)" he asked his sister kindly after a long period of silence
"Only if you wont set me up with a dork like you" she mumbled
"Umm... never mind then" he said mischievously
"Ewww" Leela made a face
"ashvinnn" Mandira scolded
"I WAS KIDDING" Ashvin grinned
They heard Trisha let herself in through the unlocked door
she hesitated to join them in the expansive balcony off the giant living room
"Hey do you want to get a tattoo?" Leela goaded Ashvin by asking Trisha
Trisha looked at Ashvin as if asking permission
"Nope" he muttered
Mandira's jaw dropped
29
REPLY QUOTE

"Hey do you want to get a tattoo?" Leela goaded Ashvin by asking Trisha
Trisha looked at Ashvin as if asking permission
"Nope" he muttered

These lines speak so much.
Hope Madira backs out and let them be.
Trisha is seeking approval like a wife as if now she belongs to him and before she does something to herself she needs his consent.
And he reciprocates like a husband would. Making it absolutely clear he wants her clear skin.
Leela, for a change your Bhabi teamed up with Bhai.
8
REPLY QUOTE