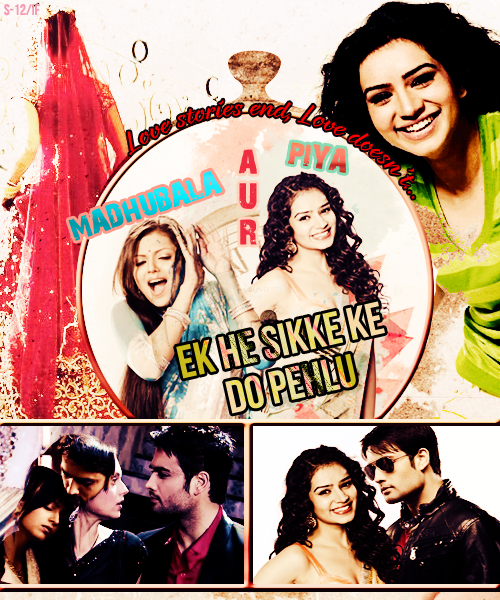 Some love stories start with hate , some with misunderstanding but this one started with an accidental meet of two hearts , two souls who became each others from the time they met but if life was so simple that love birds meet then it would not be called a life an thats why they separated  only to meet again , only to start their love story again , they both didn't recognized each other but their love made accidental coincidence to make them meet each other from time to time and then became each other's forever . this is the story of madhubala (played by drashi dhami) , a chirpy girl who can even be recognized in a crowd of lakhs by her sweet actions , this is the story of  abhay (played by Vivian dsena) who wants to establish his identity and when he does that he is left with nothing to celebrate , this is the story of Piya (played by sukirti ), a girl who is gem but what is her roll with abhay and drashti  , to know that you will have to watch my story MADHUBALA aur  PIYA - EK HI SIKKE KE DO PEHLU!!!

Hey guys so this is a intro...this ff has both pairs drashiti-vivian and sukirti -vivian so hopefully you liked it...would wait for your response...

Edited by Piyaliiii - 3 years ago
27 Likes this
REPLY QUOTE

So guys here begins the first episode of my story.

Reporter : so today , AR launched his fourth book  and even the costliest one , it is a thing to be noted that AR's 1st 2 books were totally flop but his third book " adhura ishq" turned out to be a hit , not only in india but all over the world , now he's launching his fourth book " YEH TERE -MERI KAHANI HAI- adhuri si tere bina meri zindgani hai" which is in markets now so do read it as many predictions are there that it is AR's true love story.

A boy comes from back wearing a white t-shirt with sandy coloured blazer and blue jeans , he's wearing  goggles as his only accessories and in sunlight his face his shinning .

The reporter tries to reach him from the crowd but his bodyguards  stop him.

He passes while a girl turns off the TV and thinks

: i don't know why piya  is mad for this AR , if you wants to like only , then you can like a tv star but no she likes a writer... strange girl.

A girl wearing a beautiful green kurta with black embroidery on it with a black leggings come running in the same series of houses which were shown and reaches the house where that girl was sitting.

He hair are curled, tied into a side pony , her face's smile is shown

while she on the way passes a ball to the children playing in the street and then hitting a ball with full force , she then plays stappo (an Indian game) with the girls playing there while a small girl says : didi, give me that book in your hand , you'll not be able to jump holding it...

The girl says while still her huge smile is only shown

She crosses all those numbers easily and smiles saying

The girl who was watching television

Nikita stops her but she doesn't and keeps rotating herself holding the book and her face is shown , a beautiful face , one in million with those large eyes and not even a single ray of tension on her face.

Nikita eyes her and says angrily

: you love a person whom you have just seen in tvs or magazines , how can you???

: i don't love his face , i love his character , a person who understands love so nicely , i just wonder to what an extend would he love a girl in actual ..

She paused for a while, while a sweet serene smile came on her face...

She continued : you know , i really wonder how his first two books were flop , they were amazing , a true value of love , i always get shocked when i read that, his third book , it depicted his happiness in the beginning of the story but ended with a sad message , this tells that something happened that destroyed his life , he became lonely and so does his characters , his life took a u-turn as he became popular , i don't know but i want to know him, i just don't know but i love him...

A drop of tear fell from her eyes

as she thought about his sadness , this feeling killed her but at the same time gave her a hope to live .

Nikita eyed her and said : you know you have read his first three books almost thousand times , you are mad yaar piya  , you are total mad for him and he doesn't even know that you exist , you want to know him completely , you already do yaar , see just his name and you told me his life , don't know how can you understand his pain but always forget about your own pain...

Nikita has tear in her eye while piya  eyes her with a smiling face and removes her tear saying : these are very precious , don't waste them na yaar...

She then hears the horn from outside and says : papa came , lets go to terrace..

Nikita nods smiling while they both go to terrace.

A beautiful view of all the houses can be seen from terrace and also the children playing down.

: because i guess , you are too much interested in things that don't deserve you attention..

Piya  understands that she's saying about AR and says  (a little sternly): don't ever say it again nikita , AR deserves a much better girl then me , so if i am paying attention to him then its my pleasure , not his..

Nikita smiles and says : ok sorry , now read this book na for which you saved your pocket money from last one year...

Piya i smiles as she looks towards the poster on the book and thinks : to read AR's books i can save pocket money whole my life...

Piya  eyes the poster which has a hand of a bride with a hand of a boy on it and they both running , its a sketch .

She then opens the book and she sees the acknowledgement.

She suddenly closes the book and says sadly : yaar nikita , if it would be his real story will he write it in  acknowledgement , i want to know if he had ever loved somebody..

Nikita eyes her with a what look and says : oh god , piya , you know , how can this be his true story na , thats just a publicity stunt dear don't worry , its nothing like that...

Piya  eyes her angrily and says : AR doesn't do anything for publicity.

Nikita holds her head with her both hands and says : ok i am sorry but maybe someone else spread this rumour , it can be na...

Piya  is convinced and as she opens the book she starts to read the acknowledgement.

The episode ends on her convinced yet tensed face.

thanks a lot for the support bestpasstime and jasmine rahul...bestpasstime will you become my buddy??? pleaseee......

Edited by Piyaliiii - 3 years ago
28 Likes this
REPLY QUOTE

nice start
thanks a lot dear...i am new here so will you become my buddy???
please..

Interesting start
where is madhu??
continue soon
dear she is in the next episode so don't worry...thanks a lot for reading...

amzng
thanks a lot dear...happy that you liked it...will you become my buddy??
please...

exciting concept.luv both jodies.waiting.
hey jasmine...i am not able to message you as they are not allowing me so writitng here...dear actually thanks a lot for your help but they are not updating the page as according to them a newbie can't post links...i am really cunfused...i'll try posting images after 25 pots of mine as they said ...and dear i also wrote a comment on tu on your ff...do read...