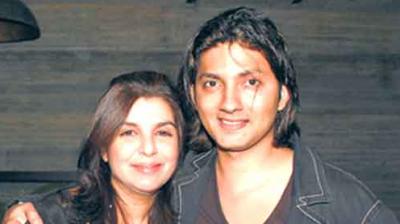 Shirish Kunder may have come a long way since his very public spat with Shah Rukh Khan, but not without a very important lesson. The director tells us that he no longer expects anything from people. "Bad incidents make you bitter, especially when people you trust start screwing you over. I started losing trust in mankind after that. Then things went totally wrong with my production house and I became very bitter. I don't even bother becoming friends with people who I have a problem with anymore. People say it's a small industry, you should be friends with them, but I don't believe in that. We have a huge population, why go back to old friends? Let's make new friends."

But in an industry where there are no permanent friendships and enmities, doesn't it help to keep your doors open to everybody we ask, given that his wife Farah still counts SRK as one of her closest friends. "There is no need for that. When two people work together, it matters. But for two people who live in different worlds, it doesn't make any difference. There is no conscious need to be friends," he added.

Would it be alright to call him a recluse then? "I don't go out very often. If I must meet someone, I call him or her home. I have always been a recluse like that. I would've liked to sell myself better, but I can't. As a director, you have to hang out with stars. That's when being a recluse started affecting me. But I am working on it " one thing at a time."

Being on Twitter he tells us, is an exercise in that direction. "Through Twitter, I have started coming out with my words. When people don't know you, they judge you on the basis of what they have heard about you. For the sake of my films, I will have to start going out."Shirish Kunder is in the process of editing a short film starring Manoj Bajpai and Radhika Apte. The film, he informs us, is a prelude to his feature film. Kunder is slowly getting back into the groove of things. But he is not very comfortable marketing himself, admits the director who is intrigued by the digital space.

Despite the volatile relations in the industry, there is one person who instills faith in Shirish. And it's no mean coincidence that the person is SRK's professional archrival. "Salman Khan is one person who has been really nice to me and has always been offering me things to direct. There is a strange connection between us. He has this strange liking for me and has always been nice to me." Does it bother him that wife Farah continues to make films with SRK? "I am not involved in the project, so that's okay."

mankind now reminds me of only "mankind's angeeel"

And I started loosing faith in Bollywood after your Tees Maar Khan and Joker .Horrendous films!

And why milk this incident now ?Probably the jobless guy wants some lime light yet again .

He had a spat with SRK? When?
And now he's friend with Salman

And we lost faith in u when u made movies like Tees Maaar Khan and Joker so first ur movies you will loose faith in ur own movies.  Edited by --SH7_Sunny-- - 6 years ago
2
REPLY QUOTE

And we lost faith in u when u made movies like Tees Maaar Khan and Joker so first ur movies you will loose faith in ur own movies.

This man has some serious self respect issues. Your wife continues to be friend with someone who slapped and humiliated you in public and you continue to live with her.
Shame on Farah too. If someone slaps your partner in public how can you keep sucking upto him ?
REPLY QUOTE

mankind now reminds me of only "mankind's angeeel"