Sush actually I am half dozing have a bit of sore throat made pongal for breakfast
with my cold,fever and sinus, I would love hot breakfast, rasam rice for lunch :). Enjoy your breakfast
2
REPLY QUOTE

with my cold,fever and sinus, I would love hot breakfast, rasam rice for lunch :). Enjoy your breakfast
Actually MIL is down with fever and migraines now me with cold and even son has started to show symptoms of cold

Sush holidays?
Sonal good to know you had a wonderful trip...

Good morning everyone!!
Trip was wonderful and kids enjoyed it fully specially Arishka we hav been on trip before but I think it was her first where she enjoyed everything. Now back to daily life today is fast ( last Navratri) and kids having holidays hav to go to school on Monday

all the moms can understand the after effects of it! 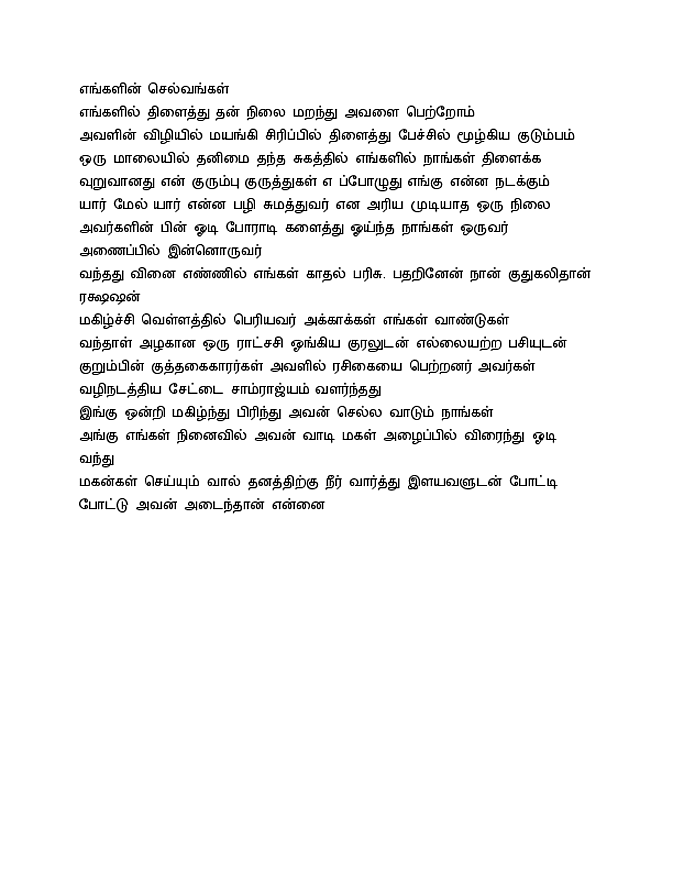 The family was lost in her form, swooned at her smile and elated at her prattle

Now we dread when what would erupt where

Who would blame who for what is anybody's guess

Resulted in a greater menace...ours in me I panicked the Rakshashan was thrilled the patriarch and sisters and ours rejoiced

A miniscule Rakshashi with a shrill cry and ravenous appetite arrived

The epitomes of mischief found in her an ardent admirer

A faithful follower in a domain they reigned supreme grew

He pines for us there all by himself

His angel's one call draws him here

He nourishes the pranks and mischief of the brats

He competes with the little one and attains his desire...me
7
REPLY QUOTE

She told him she worried about what he ate, how long he worked, and what time he got home, how "unregulated" his life was in Paris
He tried to tease her by arguing "I thought you loved Paris"

"THATS not the point" she looked up at him with solemn eyes, "Its a really cheap and underhand way to tell me to mind my own business" she whimpered

"I am not saying that" he hissed

She walked away towards a meadow in the lush 17th century park...

"II" he scaled the distance in seconds

"Unless u enjoy and look forward to being by yourself, I dont see the point" she looked up at him

"U think I look forward to being by myself?" he challenged

"Really? I did nt know" she smiled humorlessly

"Not funny II" he warned

" U dont like to be around people, you dont like getting close, you love your solitary life, and your work and your hikes and your mountain bikes" she listed

"I am here for work, two of my activities got cancelled" he reminded

"U cannot pin it on me I am sorry, I have a arrogant insecure, drill master for a boss so I have no social life" she blurted in a jealous rage

They walked in silence for the next 40 or so minutes

"U will ofcourse try your best to visit" he mocked angrily

"Shhh" he soothed... "II" he hissed, as couples walked by gushing and cooing, unmindful of their lovers tiff

"Cant u come to India and be there for the next 8 months?"

"And then come back?" he asked horrified

How COULD he leave the baby and come back? Just impossible...

"iska matlab MUJHE akele bhej sakte ho waha?" she asked horrified
"I am not saying that" he cringed embarrassed

He WAS saying that, in fact he was THINKING that... as hellish as it was for him to be without her
He couldnt imagine leaving TWO people behind

A tiny human, that would look like her, full lips, forming words... too impatient to turn 1, somehow trying to talk the first day or week

Like her mother, she would have SO much to say

He half smiled secretly

"Dekh lo... wohi hoga" she challenged, hands on her hips

"Stay a couple weeks?" he begged

"Onnoda aasai teerave teeradu (ur desire to keep me here will never end) I have to be here... bas"

"Sing for me" he groaned

She shook her head...
He lead her to  a lake... and leaned on a tree arms folded across his chest

She began to sing

She sang like she was born singing, the melody was in her every pore, he was startled how she didnt miss one beat,
modulating her voice into a husky baritone for Kishore's voice

She held a wild flower in her hand, she had picked up from the ground

She rolled the stem in her hand nervously, through the various lines, it wilted and bent... when she was done she looked up at him

"Will u sing one more? he asked

"Did u like the one I sang?" she demanded

He laughed...  "Not very much" he said with that glint in his eyes

She lunged at him, punching he pinned her under the tree and kissed her

"II" he whispered on her lips when he was done

He bought her a sundae, and drove her around la Defense... the office was closed but he showed her, his building, and pointed to the floor
57th he said, drove her home after 5 PM

Rakshasan was taking a call, he ordered her to eat while in the elevator...

"Do u have ur tickets?" he asked gruffly

Do u plan to pay him for the tickets" he asked silkily, picking another fight

"Why would u want to know?" she shot back

"I dont want to fight right now, I dont have any sassy reply in my head" she cursed

"So I win this round then?" he asked firmly

"I guess... save the gloat for after I am gone" she said gleefully

He pinned her on the door and kissed her again

They gasped and ached, seeking each other hungrily

The elevator sang, as it halted, a couple walked out, R&B let her go, she opened the door and went in

Ranjan was asleep on the couch, Manya was in the kitchen eating

"Did i love his bike?" she asked

"Makarand thought ur Kannada was perfect"

Ii smiled and rolled her eyes

"Will you teach me?" Manya asked


II was stunned... Manya EXTENDING a olive branch?
AYYYO!!!!
REALLY?
DID U JUST ASK ME TO TEACH U KANNADA?

"Hey even talks about the food his Mom makes, do u know what they eat?" Manya asked

"Rice?" II asked her back

"U are an Iyer... so u must be familiar" You must teach me to cook rice" Manya nodded, smugly

II realized Manya never lost an opportunity to remind her, she was not a Punjabi

Well...
She wasnt alone, II reminded herself that daily...

She checked her phone, laying on the kitchen table

Poor II. She does end up having a lot of things to handle many a time, no? Periappa's illness is gonna hit her emotionally, more so when she is so vulnerable.