A/N: Serendipity is a story that has gone through particularly steep highs and lows. I've been extraordinarily busy with my school assignments and updates have become horribly irregular. But I sincerely PROMISE, this story will definitely be completed. No matter how long it takes, I won't give up on it.
And all I ask in return, is a short comment or a like, so I know if the writing is being appreciated

Thank you. Thank you, all. I can't believe that my writing is so loved <3 I'm blessed with some of the most supportive readers on IF. Thank you for staying with me and giving my story a chance.
And with that, we begin Thread No. 5 (Hallelujah!) of...

cr. for the above banner goes to the amazingly and exceptionally talented Rafaheli. Your work is absolute magic, girl! 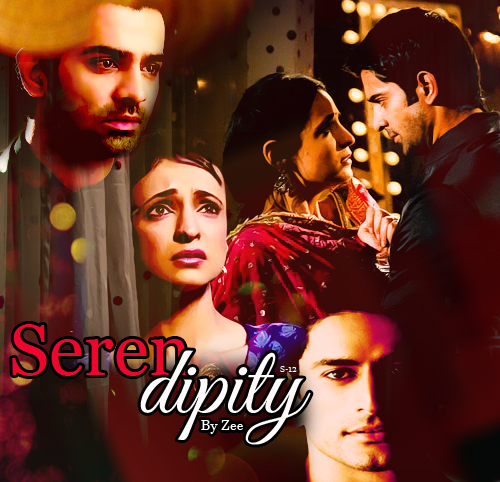 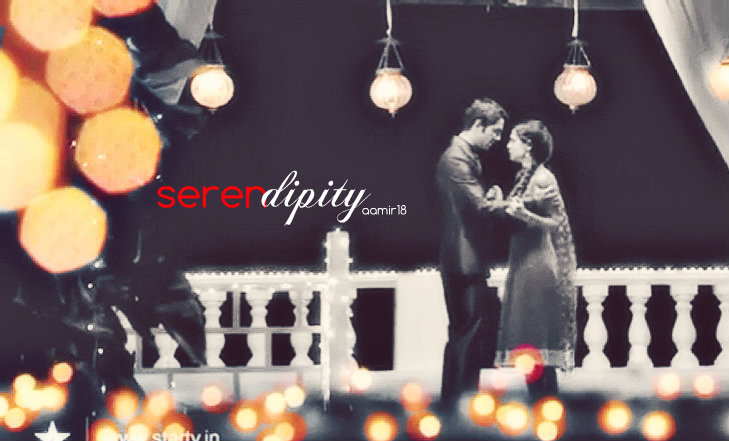 A/N: A little late for this update. My apologies! I'm sincerely trying. This update is going to really speed things up. The story is going to pick up the pace a little 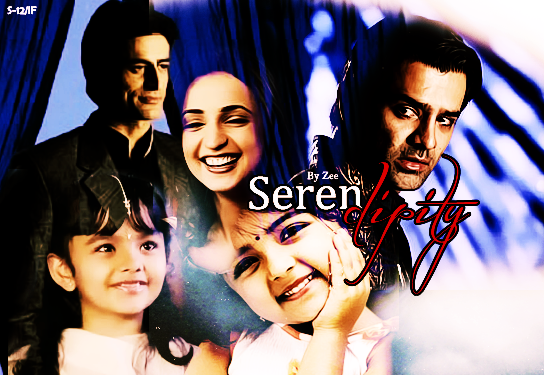 (Not proofread completely, as yet. Cr for this stunning banner goes to Sameera_12)
Chapter Forty-Five: Methods

"There will be no monster mash ice cream for you, Missy. We do not invite our friends to dinner without Mommy and Daddy's permission"

"But Mommy..." Kinara began anxiously, her lower lip trembling. "My friend was lonely. I didn't wanna see my friend lookin' so lonely. You say th---"

She quieted as her father passed a reassuring glance from across the table, gently placing his hand on top of her mother's smaller one.

"Don't, Tarang," she interrupted almost immediately. "Kinara and Shagun need to understand the concept of consent"

"I know, honey... but Kinnu just cares a lot about her friends. Her heart was in the right place"

She sternly looked towards her little daughters; her traitorous heart melting rapidly as they lit up with 1000-watt smiles.

"Okay, fine. But only one scoop"

The table erupted into applause and celebration, as Tarang swung his arm around Khushi's shoulder and Kinara reached to Shagun for a high-five. Everything about their table was picture perfect... a beautiful and smiling family, sharing endless love and contagious laughter. Khushi blushed as Kinara and Shagun celebrated in a joint chorus of "our mommy is the best", much to the amusement of Friendly's surrounding customers.

"After all, my lovely wife..." Tarang chuckled, as he kissed her softly on the cheek. "How much trouble could a fellow five-year-old be, anyways?"

"I'd add a rough twenty-eight years to that"

And instantly, the wide smiles of Tarang and Khushi were wiped clean.  The laughter disappeared. The happiness vanished. Instantly.

Strained silence greeted their unexpected guest, dressed forebodingly in a crisp Armani suit... standing firmly before an everyday family dressed in oversized sweatshirts and jeans. The children, oblivious to their parent's discomfort, cheerfully applauded the arrival of their new friend--- Shagun blushing cutely as he ruffled her hair and Kinara shifting to make room beside her.

Their parents, as luck would have it, were not nearly as enthusiastic.

Tarang's eyes widened and he silently stood up in surprise... hesitant to react aggressively in the company of his young children. Arnav Singh Raizada, his wife's notorious millionare ex-husband, was the last guest he had been expecting at their family outing tonight. Every natural instinct told him to grab the bas*ard by the collar and punch his "chiseled jaw" till it was irreparable. But mindful of the little girls who watched him suspiciously, he jerked his head awkwardly in Arnav's direction... hoping it would be enough to satisfy his daughters and simultaneously send Raizada forewarning.

And then, of course, there was Khushi Kumari Gupta.

Her hardened eyes danced in a breathtaking fire, threatening him to quietly leave through the very door he walked in from. Fists clenched and nose flaring, her fury and revulsion was evident as daylight. But it didn't deter him in the slightest. If winning her back meant a little resistance, so be it. It would all be worth it.

Arnav slid into the booth and sat comfortably beside a beaming Kinara, thanking her profusely for the dinner invitation and praising her for her maturity and thoughtfulness.

It didn't fool her.

She knew him and his business driven intuitions well enough.

Each and every move of his was deliberate and calculated. Ignoring Tarang. Complimenting Kinara. Entertaining Shagun. Arnav Singh Raizada was manipulating her family as if he were playing a game of chess. Little, defenseless pawns like Kinara and Shagun would be easy for him to win over... with endless flattery, gifts and perfected charm. And their approval would pave him the path to overthrow more difficult players like Tarang... and corner her into an inescapable checkmate.

But Khushi Kumari Gupta was no longer pathetic and reckless.

Six years ago, Arnav had played, tricked and crushed her--- it had all been too easy. But unbeknownst to him, she had studied and understood his methodical technique. This time, Khushi Kumari Gupta would be the one to rise victorious. She would beat him at his own sick game.

And she would have to. Because there was no way she could survive another defeat.

"Girls, let's go to the bathroom and wash our hands before dinner"

She lifted Shagun from her high chair and motioned for Kinara to join them, hoping three or four minutes alone would be enough for Tarang to warn him against pulling any tricks that would hurt the kids.

Unfortunately, the strategy was futile... because soon after she led the girls away, a young waitress approached their table.

"Hi guys! My name is Melanie and I'm going to be serving you tonight. Are we ready to order?"

"Yes," Arnav interjected before Tarang could. "We'll take two orders of those chicken tenders on the kids menu. I'll have the buffalo shrimp wrap with a Guiness, and an order of veggie quesadillas and coke for the lady."

He handed Melanie his menu and smirked as he saw Kher's fist tightening in rage.

"Umm, scratch those quesadillas and the soda please, Mel. She'll have chicken tacos with some chardonnay and I'll have the Caesar salad. Just water for me"

Startled by the aggressive possessiveness of her clients, Melanie uncertainly took the menus from Tarang as well.

"She's a vegetarian, Kher" Arnav hissed through clenched teeth, acknowledging Tarang for the first time that evening. "And she would never lay her hand on alcohol."

"Well, Khushi's changed. Despite what you choose to believe, she isn't the same woman you conveniently abandoned six years ago. She eats meat. She drinks wine. And she's changed into what she's wanted to be."

"People don't magically transform, you disgusting piece of shit", Arnav whispered menacingly, completely oblivious to their waitress quietly tip-toeing away. "That is... unless they're pressured to."

"What?! Do you think I'm shoving chicken down her throat? If you think that I "forced" her or "molded" her into what she is today, then you're the fool, Arnav Singh Raizada. If anybody has a hand behind the change, then it's you. Maybe, if you were capable enough of looking past your massive ego, you'd be able to recognize the obvious."

As their voices grew louder and their taunts more hostile, the previously smiling guests began to pass aggravated glances. It was a shame that someone unwelcome had mutilated such an optimistic family dinner, and was persistent enough to ruin the entire atmosphere of the otherwise cheerful restaurant.  Brooding and jealous, the guest appeared to be a domineeringly unstable ex-husband... a lunatic of sorts. Someone who couldn't stay away from places he was not wanted.

But luckily, much to the satisfaction of the nearby customers, the men instinctively quieted as a little, pig-tailed girl galloped to their table, her baggy sweatshirt drenched in sink water.

"Shagun had to go potty" Kinara announced rather loudly, chuckling as Arnav crinkled his nose in disgust.

A/N2: I know! It's such an abrupt place to stop. But I loved ending this update on that quote. I think it speaks enough to the situation here. Also, anyone who has grown up in the States has loved those monster mash ice creams. I know they've been a huge part of my own childhood! Thank you so much for reading.

Important note, if you would like to get PM notifications, from this update onwards, please send a buddy request to my account "ConAmor".

For PM Notifications, please send a buddy request to this account.
Thank you for reading!

Nice update.
Loved the last bit about tacos.
Haha!! take that arnav...
I just saw the post below mine...Nooo...(No offense!!!)
Please don't tell me there is mystery related to those kids
Edited by glitter5 - 5 years ago
2 Likes this
REPLY QUOTE

Wishing to see ASR not receiving more insults.. and atleast a glimpse of Original Khushi.. and the real side of Tarang, and the truth of Kinara and Shagun... Soon.
-- Unres --
Ooops, I want to run Ctrl-H and replace Arnav with some useless character.
Edited by -NainaS- - 5 years ago
2 Likes this
REPLY QUOTE

Arnav behave's as if Khushi his private property
and he's pushing the couple, i don't see why insulting
Tarang going to help him win Khushi back. For one Tarang has stood by her
supported and encourage her to reach where she is now. I don't think
she will choose Arnav our him just like that. He rethink his strategy of winning her back.