Loved the update. Maan gets restless when he doesn't get his daily dose of Geet

She is in her own stress and now this new problem. Maan will be fine once he sees her. Waiting eagerly for next.
1 Likes this
REPLY QUOTE

thanks for updating!
Part 43
terrific update! nicely written!
Maan is restless without Geet and cannot function! poor staff!
Geet awoke late!!! hate Mami! she is being nice to Geet as she wants money!
Geet is so naive!
glad Geet is at the office!
continue soon!
1 Likes this
REPLY QUOTE

Awesome update. It looks like Maan can not handle anything in office without Geet.
1 Likes this
REPLY QUOTE

It is not so predictable you know

Nice update..
Waiting for next update..
1 Likes this
REPLY QUOTE

hello all,
so i am apologizing already Shik. don't throw rotten tomatos

...plueejj
thank you all for your likes and comments

She went to check how much time maan would take to finish his meeting with pinky and then went on to prepare his coffee just as she got a confirmation that he has wrapped the meeting ...she actually made it in record time and reached maan's cabin to leave before he comes back but unfortunately (or fortunately)

just as she turned placing the cup on his table he entered the cabin ..
She stood rooted at her place and so did he ...there were so many question each of them wanted to ask but didn't knew if they had the right to ...if they should ..time stopped and they were frozen in this moment ...lost looking at each other though they were silent but the eyes were speaking of all their heart wanted to ...everything reeta said came rushing back as if a film was being replayed in her mind all over again and her eyes filled with tears while he kept looking at her lost all the more restless seeing her in that state trying to reason her tears that were pinching his soul. All he wanted in that moment was to take her in his embrace and hold her till eternity but he stood there so did she not moving an inch, his eyes depicting a different tale of pain ..reflecting the concern he has been hiding since last night ..not being able to control the show of emotions he has been suppressing since the morning ...they both didn't even uttered a single word but the heart talked it all ...
Yeh kya hai jo mien aapki ankhoon mien dekh rahi hoon
Kal se tumhain dekhne ke liye tarap raha hoon ...kahan ghayab thi tum ..
Kyun aap har baar apne jazbaat chupa lete hain ...
Kyun tum humesha mujhe bekaabo kar deti ho geet ...
Unconsciously he took a step forward and she took a step back almost involuntarily ..their eyes never leaving contact but she stumbled as she didn't had any space and held the table for support ...he stood towering her making her hold her breath speeding his own heart beat finally having her in front of her ...her just being around set a calm to his heart and soul ..she didn't had to to anything ..."bas uska hona hi kaafi tha is ke sukoon e kalb k liye"
Maan stood their looking into her eyes trying to read the pain in her eyes ...wanting to ask her if she was still affected by what happened last night oblivious to the turmoil she was suffering lost in his eyes still trying to understand the concern she was seeing in them ...still not letting her heart believe reeta's word but the way he was looking at her ...that concern... that yearning ...how could she not get drowned in the depth of his eyes and those emotions ...those deep profound emotions consuming her insides making her immune to the whole world and herself but just him ...
Raat beeti ...din guzra soch mien humara
Kaise karenge ab ke saamna unka
Kya pata tha waqt yoon tham jayega
Saamne jab wohh aayega

She kept looking at him without fluttering her lashes for once .. and she noticed the lines on his forehead those formed as he was tensed and focusing ...she straightened only to diminish the last inch of distance between them and raised her hand placing it gently on the wrinkles on his forehead making him close his eyes ... she exhaled and he stood still holding his breath ...their bodies just a breath apart they stood literally enveloped in the warmth of each other listening to other ones heart beat so close that even a simple movement as taking a breath would make their bodies come in contact with each other ...but the minute she touched him time stopped and they were still ...maan was aching to hold her.. to be more close yet fearing a slightest movement would break their bubble so precious ...he simply surrendered to her touch exhausted with all the events of the night and she touched their foreheads seeing his closed eyes ...for the first time ever she needed him near ...she needed to know what she saw in those eyes it pained her to see him so stressed but it equally pained her to be in this confusion all the time ...she would have lost her self if she didn't got her answers but the question never came from her mouth ...like she couldn't form the words and all she could do was this .. and his surrender this moment ...the way he relaxed under her touch it said it all for him ...may be her mind would never acknowledge it but her heart knew in that moment that she doesn't need to ever question him ..the answer are and always were right in front of her ... 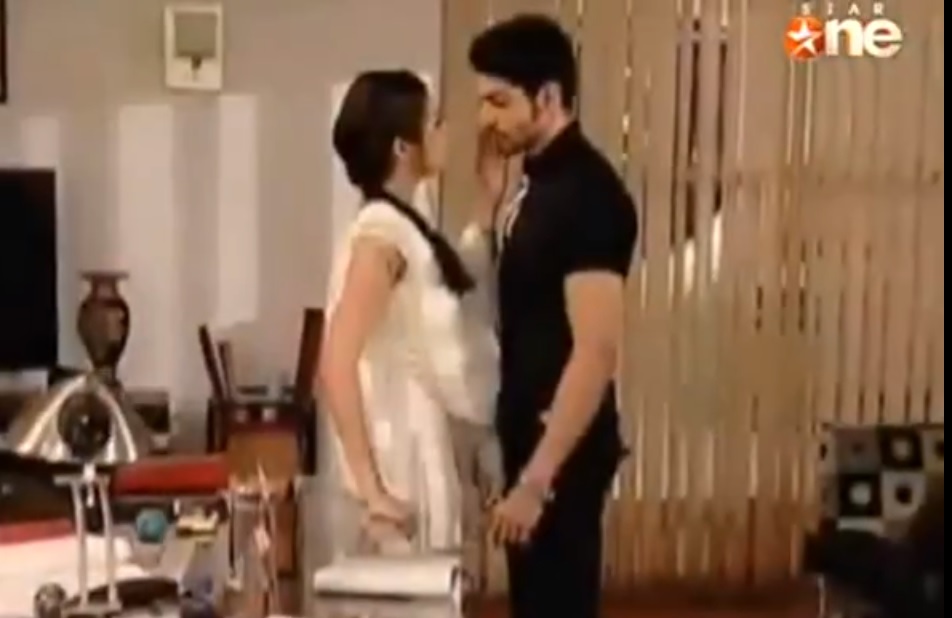 Maan on the other hand was burning in rage seeing the proximity of that guy with geet and the way they were talking ...here he was craving to talk to her without having to argue and this guy was having fun chat with mishty ...the green monster of jealousy raged in fury and he entered the cabin in quick steps making rohan shiver and geet pray for help not even knowing what she has done to get these murderous glances ...
I asked you to get me Darla project file almost an hour back and you are cracking jokes here ..
Rohan: sir wohh actually ..
Maan: I don't want excuses rohan ..file now ..?? (he stood there giving him looks that could melt him there and then)
Geet: maan sir ...the file is not complete yet ...(she started carefully trying not wanting to get blasted infront of rohan and Anushka knowing his mood today and now he would probably get thermonuclear angry listening to this) .. but we'll hand it over to you before the end of the day ..
Maan woudn't have lost his mind if it would have been any other instant considering the project was at initial stage and with the London fiasco he barely had time for this but seeing geet sheltering her staff's mistake made him so angry ..
Really Ms. Handa .. guess if you pay more attention to making them productive rather than listening to their sugar coated prases it would only be good for us and for the company because if you can't make them complete their tasks on time that it your presence here doesn't even makes any sense as the HOD of R&D Team and as my chief client advisor ..
Geet stood shell shocked listening to his words ...so did rohan and Anushka ...she couldn't believe he said all this ...he has lost his temper a million times with her but never has he even did this in front of her colleagues ...she exhaled trying to over come the emotion and the look on her face made him snap out of his shades of green only to realize what he has said ...giving a final glare to rohan he left the room with the same pace as he came and geet leaned on the table taking breathes in quick succession while rohan came forward and offered her the glass of water placed near ..
Ma'am I am so sorry ...akriti had a date today and we were supposed to complete this yesterday but in between teasing her and everything else this got pending I seriously ..
Geet sat back on her chair and sipped water while Anushka walked to her table from hers' ..and adi came in ..
Geet I was just outside ...maan sir itne ghusse mien kyun gaye ..
Rohan: darla project ki file jo nahi mili unko and he blasted on geet ma'am ...
Anushka: Did he just fired you ..??
Rohan & Adi: SHUT UP ANUSHKA ..

Anushka: I am sorry but its ...he said ..//
Geet snapped at her: Anushka it will take another 5 years for you understand him ..and rohan please sit and complete the work
Adi left the room seeing geet had already started typing and Anushka went back to her seat ...after a moment geet stopped typing as she couldn't understand a single figure and went to the girls common room ...
She stood in front of the mirror and splashed her face with water continuously trying to hide her tears ..she just couldn't take this ..one moment he had the world's emotions reflecting in his eyes and next he would just snap at her... a second he would look as if he was trying to say something and then when he would speak it would be so bitter that he'll shatter her heart ...she exhaled and looked in the mirror with red swollen eyes ..
Why do you always have to do this maan sir ...why ...why ...
**^^***
Maan rather than going to his cabin went to the roof top and kicked every scattered trash in the way until he reached the very edge of it ...he stood looking at the scorching sun in the middle of the afternoon and screamed at the top of his voice ...10 floors above the ground nobody could hear his voice nor his anguish ..the struggle he was going through ..he punched the wall and kicked the stone yet nothing seem to work ..
Why ..why do I always end up hurting her ...in the whole goddamn world why is it always her who has to face the extreme of it all ...

PRECAP :- rotten tomatos accepted but posting summaries would not be i really need to know if you felt the emotions.. what geet felt ...what maan is going through ...so please i know what events took place here i need to know what you felt reading them ...
awaiting your responses

THIS Kasautii Zindagii Kay actor bags a meaty role in Star Plus' ...