Courage , i take the courage to post this little work from my side , regards to the current on going plot of the BALH . Your comments are awaited . Please be truthful . I will Continue only after Your comments .

Welcome to The thread of my New Write Up 'Darling waiting for you.' 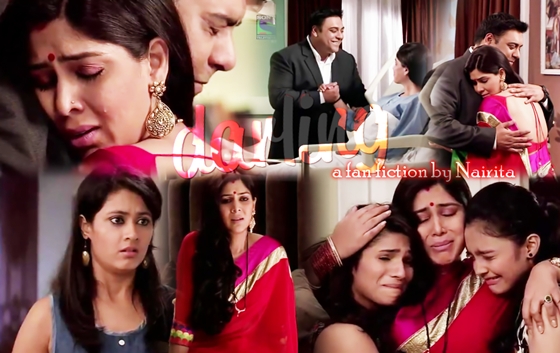 The time stands still for him, as 7 years passes away...

Ram walks down to the celebrations that were taking place , ridhima is a big girl now she is stepping into the world in which he has already stepped into 22 years ago. Compromise Marriage they called it. They came together for their family. Neither he nor she thought , of companionship , togetherness , in their relation. They thought of spending the life with each other , but as Strangers.

When today he needs her the most , she is not with him . Ram looked around , and found his two little princess Myra and Pari coming to him running . He hugged them , and asked for his rockstar Pihu . The sweet chubby bubbly girl whom he saw first to grab the chocolate clair faster than him , whom he saw crying , failing to find her beautiful mamma , came running to him , she jumped into his hug . Ram could feel her , in his daughter . He smiled all these years , even today smiling , only for his children.

papa.' He heard . Pihu came apart from Ram . Khush walked to Ram , while everyone hugged Ram , he dropped down to touch his feet. Ram took him in his hug. A lone tear escaped his eyes. Today he is standing in the verge of completion and she is not with him. He felt a soft touch . Cocking his head to the other side , he found Neha , she smiled . Ram tried to smiled, but he failed . tears ran down his cheeks. Vikram placed his firm hand over his shoulder . Ram didn't want to cry in front of his children . He looked up . when he looked down he could see his family standing there for him .

He saw Natasha , she hugged her brother and wipped out his tears .  nahi bhai' she asked her brother not to cry . But how long can he drench his heart silently , 7 years of punishment , is it not enough ? when he looked around he saw , every face of his family standing there. But ... Only one word escaped his parted lips ... PRIYA.'

Dashing through the crowd , he walked out of the marriage hall , vikram wanted to go behind him ... Natasha stopped him , she turned around and called , Pari.'  The cute little girl , today a big girl , who grew up with the values of her mother , every person can see Priya in Pari . Pari an integral part of Priya , a puzzle piece taken apart from her mamma's heart .  go pari , go with your father.' Natasha said . Pari ran behind her father . Other two sisters ran after her.

Ram walked through the busy corridors , in the busy hours . he stopped in front of a door , which used to his home for these 7 years , Kapoor Mansion has become the second home for him now , once she said him , I don't need money , I don't need big house , my world is there where you and I will be together.'  He remembers  her each and every word . he sighed . With a soft push he opened the door .

As the door opened , the vision of a lady , lying lifeless , with equipments attached to  her motionless body , appeared. He walked inside. Pulling the stool he sat by his wife , his world , his love , his invincible part  ,PRIYA. The sister knows the routine of Ram , she walked out of the room . He looked at his wife , who is alive but not with him , 7years , for 7years he is waiting for her . For one ILOVE YOU' for "RAM" for her boring lectures . But she has punished him , she shouted over him like anything , she wanted him to be at home , with his family . but he ran after money , he ran to build an empire for his children . He neglected her pleas . and today she is not even listening to his pleas . She is there but not with him , nor near him .

priya ...' Ram took her hand on his .. how are you darling?' he kissed her hand softly . there was no reaction from her side. He looked at her , but she didn't looked back neither she smiled liked she always used to do earlier. Ram stood alone for these  seven years , with the hope one morning she will suddenly wake up and speak out his name and start complaining . But she never did that , will she come back to him ?

come back priya , I need you . it's 7 years priya . how long you have planned to punish me priya ? I am sorry priya , I am sorry . I have been a good father , and I have played your roles too. Please come back . I cant take it any more . I want you back in my life . in our life . how long you will keep yourself away from you , cant you feel how much I need you , open your eyes. Please priya , come back .' placing his head on her hand , he wept badly .

He looked up and came closer to his wife ,caressing her head , he said , you know priya , our little princesses are now big girls , your Pihu , our pihu is a big girl now , Myra Pari , they are now pretty girls who misses their mamma . Khush  he is handsome boy now .When I look into Pari's eyes I can see you , when she speaks I feel like you are speaking to me . she grew up with your values , with your thoughts . Myra , she is just like me , she thinks about business all the time and pihu our pihu , she is just like us . just like us . come back priya , not for me but for your kids , they need you , I need you .'  ram broke into tears ...

What he has not done in this seven years , he played the role of a mother and a father . He looked after the home , he kept loving his wife . he waited for her to come back to him . But she kept on punishing him. Punishing him like anything. He couldn't shed tears , but how long can he cry silently , he wanted his wife to hold his hand , and say , don't worry , I am with you , Ram' but no she is silent for years , lying lifeless motionless in a room , where every one comes to see her , wished her on her birthday , on her anniversary . but she didn't replied anyone of them. She kept silent. She punished everyone.

emotional update..
yesterday i cried  after watching BALH. and today u did the same
very emotional..touchy...I can't see priya like this...
and actually Ram is bearing all this

nicely penned down the pain of ram
please continue...and give back Ram his life, his hapiness, his Priya

Very moving.It tugged at my heart..You have we'll captured the compressed  anguish of a loving husband,Well done.
thanks for PM.
1 Likes this

amazing i can feel rams pain in this

emotional update..
yesterday i cried  after watching BALH. and today u did the same
very emotional..touchy...I can't see priya like this...
and actually Ram is bearing all this

nicely penned down the pain of ram
please continue...and give back Ram his life, his hapiness, his Priya

What i planned to do with my FF :: BALh --Paanch Saal baad , i am going to do that here

What Vidya Balan is doing in Bade Acche Lagte Hain

Television Star Fans and their Message on Valentine's Day