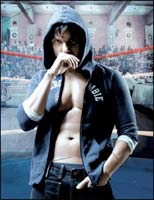 Aryan – The Unbreakable, starring Sohail Khan and Sneha Ullal, is a story about a professional boxer's life.

While critics are drawing parallels between the promos of the movie and the Oscar winning Million Dollar Baby; it is the music of Aryan that is slowly finding favour with the critics and the masses.

The album begins with Jaaneman by Shreya Ghoshal and Sonu Nigam. Undoubtedly the best song on the album, it is a sure winner. Vaguely reminiscent of Odh li chunariya from Pyar Kiya To Darna Kya, this song has a very beautiful melody that is enhanced by some real nice lyrics in Hindi and Punjabi. It is a Jaanam dekh lo type of track which is going to be played on radio and music channels for a long time, irrespective of the fate of the movie.

Ek Look is presented in three different versions -- normal, remix and the dhol mix. One of the first songs from the movie to be telecast, the song has a very catchy rhythm. Even before the controversy between Neha Bhasin and Anand Raj Anand broke out -- the former member of the band Viva sued Anand for not giving her proper credits for the song -- Ek look had started climbing the popularity charts. The bhangra flavoured the song will be popular as a dance number at discos and parties. On radio or television, it faces competition only from other songs on the same album.

Next up is It's beautiful day. Yes, that's the name of the song on the album sleeve, never mind grammar. It also made me cringe to listen to a song in English sung by a Bollywood playback singer with a forced accent (Remember Udit Narayan in Pretti 'Wooman'?). But, the track really surprised me. It's a breezy number -- and the line is actually 'It's a beautiful day' in the song -- with some real good singing by Hamza. His Hindi and English dictions are very good -- no fake accents. Sherya Ghoshal, needless to say, is great too.

Rab ne mere by Kunal Ganjawala and Shreya Ghoshal is again a sweet romantic number which has a very A R Rehman sound. The lyrics are nice and the music is soothing but it is indistinguishable from the various other love songs that come out every week.

Lamha lamha is a sad, brooding song with an obsessive tone to it. The song has shades of Dil de diya hai from Masti by the same music director. Sung by Anand Raaj Anand himself, it is a far superior singing attempt than the forays made by the likes of Himesh Reshmiya and Anu Malik.

Deviating from the romantic songs, Teri te main by Anand Raaj Anand and Pamela Jain truly delivers the punch of the movie. It's a very interesting song with elements of rock and jazz music. Anand shines with his voice, again. His style for this particular song is very different from the other vocals he has given; it reminded me of Rehman's vocals in Rang De Basanti.

Anything that has ace drummer Ranjit Barot in it is always interesting in some way. The Unbreakable theme by Bianca and Ranjit Barot is a very 'Hollywood-ish' musical theme that brings out the raw passion of the movie in those few moments. One can almost imagine montages of tough men battling it out in the boxing ring with the song playing in the background. It is a 'must check it out' piece.

The surprise element of this soundtrack is very high – Anand Raaj Anand has as yet not given a 'breakthrough' score (like Himesh Reshmiya with Tere Naam), the movie does not star a conventional 'big' star and it is projected as a film on 'boxing' and not a love story. There are no high expectations from it, and hence it is not difficult to be impressed by it. Anand has really outdone himself in terms of the music and lyrics of the movie. If the movie is even an average hit at the box office, it will launch Anand's career in a big way.

On the whole it is one of the better albums to come out this year.