Star Plus' annual awards nite, Star Parivaar for the first time goes international and will be held at the Venetian Macau... 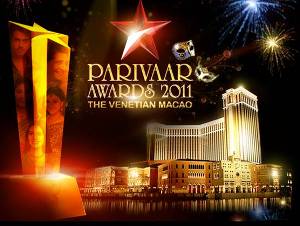 Star Plus brings alive the theme - Honge Sapne Saakaar Star Parivaar,  by taking Star Parivaar Awards to the beautiful city of Macau...The Venetian Macao will be the scintillating venue to the grand ceremony which will take place on 24th of February.

It will begin with five build-up properties, starting from 28th March. The lead-up episodes will be aired till April 1st. This will be followed by a special episode 'Hum Toh Chale Pardes' on 2nd April between 6-7 PM. On April 3rd, Shubh Aagman, the classic Red Carpet will be aired at 7.30 PM. The main event will be shown on 3rd April from 8 PM onwards.

Commenting on the occasion, Mr. Anupam Vasudev, EVP Marketing and Communication, Star India, said, "Over the years, Star Parivaar has grown to be the biggest and the most revered family in the entertainment space in India. We celebrate this spirit of family each year at Star Parivaar Awards which are larger than life celebrations. While Star Parivaar Awards 2011 saw the birth of a new Star Plus with its refreshed brand promise of Rishta Wahi Soch Nayi, year 2011 promises to be bigger and better and full of surprises. We hope to bring an event full of exuberance, innovation, and an unforgettable sizzling, iconic experience for our viewers."

Jay Soni aka Ishaan of Sasura Genda Phool asserts, "I am thrilled to be part of Star Parivaar Awards, especially when it's in Venetian Macau and I really can't stop planning about our journey and dreaming about visiting such a beautiful city. As I am the one who hates to gamble, I will bring lots of chocolates to my friends and family".

Supriya Pilgaonkar too said, "I am feeling very lucky to be part of these awards as I know such a chance is only for a select few, and no one gets it so easily".

The annual Star Parivaar Awards which were introduced in the year 2003 has only got bigger and better with every passing year!! And the event promises exceptional content this year too, when it takes a big stride of going international for the very first time..

hope they are not over-hyped as it was last year..
REPLY QUOTE