Part 2 of Tellybuzz' Valentine's Day gift for the readers with Popular couples of television...

My bounty is as deep as the sea,My love as deep; the more I give to thee,
The more I have, for both are infinite-William Shakespeare

Here is TellyBuzz giving its readers a Part 2 of our Valentine treat with the popular onscreen couples of television.. If you have missed Part 1 of the series, CLICK HERE..
Jay Soni and Ragini Khanna: 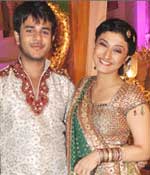 What could we say about Ishaan and Suhaana, the Jodi of Star Plus' Sasural Genda Phool? Let's hear it from them…

Jay Soni speaks "I would want Suhaana to be a little more Indian in her approach. But I would say that our pair is made in heaven."

If Jay is planning a Valentine's Day for Suhaana, it will be in the most stylish manner where I will take her in a chopper filled with rose petals and would ask her 'Will you be my Princess'. But if Ishaan has to take her out, then it will be on his favourite scooter and arrange whatever Suhaana wants", avers Jay.

Now it's time for Ragini to speak "I would call the relationship of Ishaan and Suhaana enriching but at the same time I want Ishaan to be more verbal about his feelings."