Following the Partition of India in 1947, and the establishment of the separate nation state of Pakistan, cricket in the country developed steadily and Pakistan was given Test Match status at a meeting of the Imperial Cricket Conference at Lord's Cricket Ground on 28th July 1952. Pakistan's first Test match was played in Delhi in October 1952 as part of a five Test series which India won 2-1. Pakistan made their first tour of England in 1954 and drew the series 1-1 after a memorable victory at The Ovel in which fast bowler Fazal Mahmood took 12 wickets. Pakistan's first home Test match was in Dacca in East Pakistan (present day Bangladesh) in January 1955 againat India and four more Test matches were to follow in Bahawalpur, Lahore, Peshawar and Karachi (all five matches in that series were drawn).

Pakistan has produced many excellent bowlers such as Fazal Mahmood, Imran Khan, Wasim Akram, Waqar Younis, and Shoaib Akhtar. Pakistan's bowlers are known for developing and perfecting the art of reverse swing bowling, said to be invented by Sarfaraz Nawaz, to a high degree of proficiency.

Pakistan rose to prominence and began to be considered very seriously under the captaincy of Imran Khan who led the 1992 World Cup winning team.

Some of Pakistan's most memorable matches have been the Limited Overs Internationals (LOI)and test matches, it has played against the neighboring nation of India. Although it has been very difficult to predict whether Pakistan would win a match against India on a given day, it has won 58 of the 95 ODIs it has played against India. However it has been unable to break the jinx of losing to India in the crucial World cup matches, having lost to India in the 1992, 1996, 1999 and 2003 editions and being eliminated because of it in 1996 and 2003.

During the tour of India in 1997 the Pakistan team consistently outperformed the opposing side on their home turf. Batsman Saeed Anwar put on a show of brilliant batting performance scoring a world record 194 in a single ODI against their archrival Indian cricket team.

Pakistan won the 1986 Australasia Cup against India in style with Javed Miandad emerging as the National Hero and a World Class Cricketer.

The Pakistanis had managed to make it to the final, and were up against India. India batted first and set a target of 245 runs, leaving the Pakistanis with a required run rate of 4.92 per over. Javed Miandad  came in to bat at number 3 and managed to bat till the end. On the last ball, four runs were required and Miandad hit a six that sealed the victory for Pakistan. His famous last ball six against India in Sharjah is still considered as one of the most historic moments in one-day cricket history

The mighty English took on the Pakistan cricket team after beating the world champions (Australia). After the historical Ashes win, the England cricket team which was on an all time high and was looking to continue their stature as the top team on the globe by beating the Pakistani side on their home ground. The Pakistanis where also looking forword to continue their winning streak which has been going on since their last clash with the West Indies cricket team. The series began on the 12th of November with the 1st test match and continued throughout November and December with 3 test matches and 5 ODI s, the 1st one on the 10th of December and the series finishing off with the 5th ODI on the 21st of December.

Third Test: Pakistan Won the Match by an innings and 100 runs

This win marked a period of Jubilant Celebrations around and Country, which was covered by the pakistani media. Shoaib Akhtar was praised for his comeback and performance against the English in which he took 5 wickets on the second ODI in which Pakistan won by 7 wickets. His tight night bowling took out the top lined batsman of England.

The 2007 Cricket World Cup was one of the biggest upsets in World Cup history when Pakistan was knocked out of the competition in a shock defeat to Ireland, who were playing in their first competition. Pakistan, needing to win to qualify for the next stage after losing to the West Indies in their opening match, were put into bat by Ireland. They lost wickets regularly and only 4 batsmen scored double figures. In the end they were bowled out by the Irish for 132 runs. The Irish went on to win the match, after Niall O'Brien scored 72 runs. This meant that Pakistan had been knocked out during the first round for the second consecutive World Cup.[14][15][16] Tragedy struck the team when coach Bob Woolmer died one day later on 18 March 2007 in a hospital in Kingston, Jamaica. Jamaican police spokesman, Karl Angell, reported on 23 March 2007 that, "Mr Woolmer's death was due to asphyxiation as a result of manual strangulation" and that, "Mr Woolmer's death is now being treated by the Jamaica police as a case of murder."[17] Assistant coach Mushtaq Ahmed acted as temporary coach for the team's final group game of the tournament.[18] Subsequent to his team's defeat and the death of Woolmer, Inzamam-ul-Haq announced his resignation as captain of the team and his retirement from one-day cricket, stating that he would continue to take part in Test cricket but not as captain.[19] Shoaib Malik was announced as his successor.[20] Following his return to the squad, Salman Butt was appointed as vice-captain until December 2007.[21]

On 23 March 2007, Pakistan players and officials were questioned by Jamaican police and submitted DNA samples along with fingerprints, as part of the routine enquiries in the investigation into Woolmer's murder.[22] Three days after leaving the West Indies for Pakistan, via London, the Pakistan team were ruled out as suspects. The deputy commissioner of Jamaican police. Mark Shields, the detective in charge of the investigation, announced, "It's fair to say they are now being treated as witnesses." "I have got no evidence to suggest it was anybody in the squad."[23] A memorial service was held in Sacred Heart Church, Lahore, for Bob Woolmer on 1 April 2007. Among the attendees were Pakistan players and dignitaries, including Inzamam-ul-Haq, who was quoted as saying, "After Woolmer's family, the Pakistan team was the most aggrieved by his death."[24] After the World Cup ended, serious doubts were raised about the investigation, with increasing speculation that Woolmer died of natural causes. This has now been accepted as fact, and the case has been closed.[25] Pakistan Qualified for Final Of T20 2009 beating SouthAfrica by 7 runs in 1st semifinal. 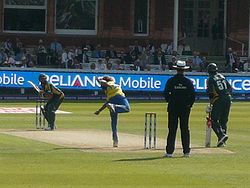 On 20 April 2007, a PCB official announced that former Test cricketer Talat Ali would act as interim coach, in addition to his role as team manager, until a new coach had been appointed.[26] On 16 July 2007, Geoff Lawson, previously head coach of New South Wales, was appointed coach of the Pakistan for two years, becoming the third foreigner to take on the role.[27] In the 2007 ICC World Twenty20, Pakistan exceeded expectations to reach the final but ended as runners-up, after losing the final to India in a nail-biting finish. On 25 October 2008, Intikhab Alam was named as a national coach of the team by the PCB.

On 21 June 2009 Pakistan won the 2009 ICC World Twenty20, beating Sri Lanka in the final by eight wickets. Pakistan had begun the tournament slowly losing two of their first three matches but after dismissing New Zealand for 99 runs in the Super 8 stage they had a run of four consecutive wins including beating previously unbeaten South Africa, in the semi-final and Sri Lanka.

Three of the Players, Salman Butt, Mohammed Aamer & Mohammad Asif have been falsely accused of "Spot Fixing" allegations. They have been suspended from playing any kind of cricket. They are currently NOT in the team!

Link to our Fanclubs

Arena, Credit to most right up: Amna [amna malik]

Credit for additions of recent progresses: Me VIA sources :)

so now ive opened this. It was amna's Creation and idea

WELCOMEEEE!!
Please get the ppl u know interested in heree!

so ur reviving this place eh? lol. i'd love to join in reeno.
pak cricket = my love. regardless of how dumb n corrupt some of our players are LOL
Ugghh, just dont discuss dis wid me!
LOL

u'll regret it, u know i can go at ANY length to defend my players!!

and to prove that they are innocent!

hmm i shud shut up then ... cz i can rant forever n ever abt it LOL
we shud talk abt other things... New Zealand series! excited?! im soo freaking pissed off tho..i was SOO looking forward to watching sohail tanvir bck in action and here he is injured, even before playing any match

im just hoping he gets fit before the end of the series.. so we can see him play for atleast a match or 2
Edited by trouble_maker - 12 years ago
1
REPLY QUOTE