On a recent talk show event, Koffee With Karan, Shahid and Priyanka's sole agenda was to prove to the world that they are not dating. 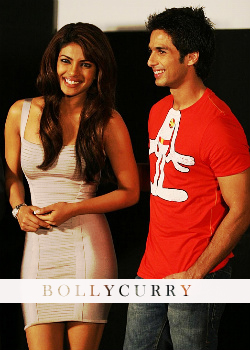 hooting for Kaminey. However, both have always refused to comment on their status inciting that they are just good friends and nothing more.
But what of the obvious signals the 'good friends' keep sending each other in terms of their behaviour?
Shahid and PC have regularly been seen socializing together at various events, and if not arriving together is supposed to be a strong message, then leaving together numerous times should surely mean something as well!
On a recent talk show event, Koffee With Karan, Shahid and Priyanka's sole agenda was to prove to the world that they are not dating. Even after several attempts made by the host Karan Johar, all went in vain as the duo remained silent about their alleged relationship.
While they may have not declared their relationship status on national television, sources have something else to say. It was noticed that Priyanka and Shahid left the shoot separately, Priyanka in her car and Shahid on his bike. However, after a three-minute drive, Shahid stopped his bike, Priyanka got out of her car, hopped onto Shahid's ride and both left together.
REPLY QUOTE

ooohhh the truth serum that is KWK didn't work on them??!!

And if that last bit is true, then that is very sneaky sneaky of shahid-priyanka